A man of many talents! Tom Daley shared what he’s been working on after he went viral for knitting in the Tokyo Olympics’ stands.

“I made my friends some doggy jumpers! It is the cutest little pattern to follow by @knittingland ❤️ How cute do they all look?! I was making another one at the pool yesterday lol,” the diver, 27, wrote via his @madewithlovebytomdaley knitting Instagram account on Sunday, August 1. Alongside his caption, he shared some adorable photos of pups wearing his work.

Last week, the U.K. native won a gold medal in the men’s 10m platform event. Soon after, he returned to the pool to cheer on his fellow athletes — bringing his knitting needles along. 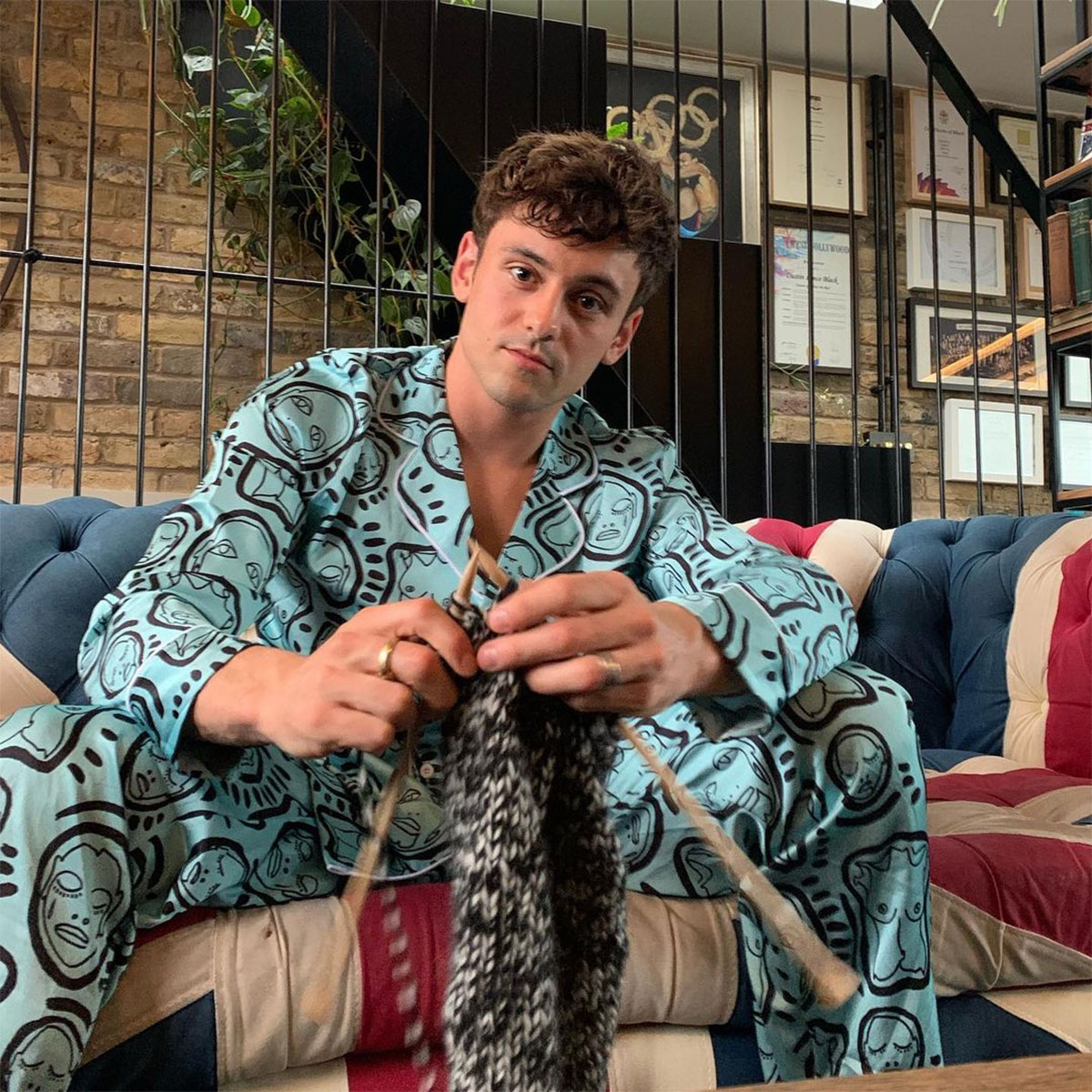 “There’s Tom Daley — he’s got his knitting needles out,” a BBC commentator noted on Sunday morning during the women’s diving competition. “What do you reckon he’s crafting there? I wonder who he’s making that purple concoction for?”

Online, more people shared their excitement at watching the craftsman at work.

“Oh this? Just Olympic champ @TomDaley1994 knitting in the stands while watching the diving,” the official Olympics Twitter account wrote. A fan added: “Important Tom Daley knitting update: he was making a dog jumper and it is finished.”

Medal Count: Every Team USA Win at the Tokyo Olympics

In his Instagram Stories, Daley gave a shout-out to the specific dog he knit the purple sweater for: a French bulldog named Izzy.

“I don’t have a dog to show you what it looks like on, but this is the dog jumper I was making,” he said in the video. In a caption, he added: “@Izzythe.frenchie I FINISHED YOUR SWEATER!” 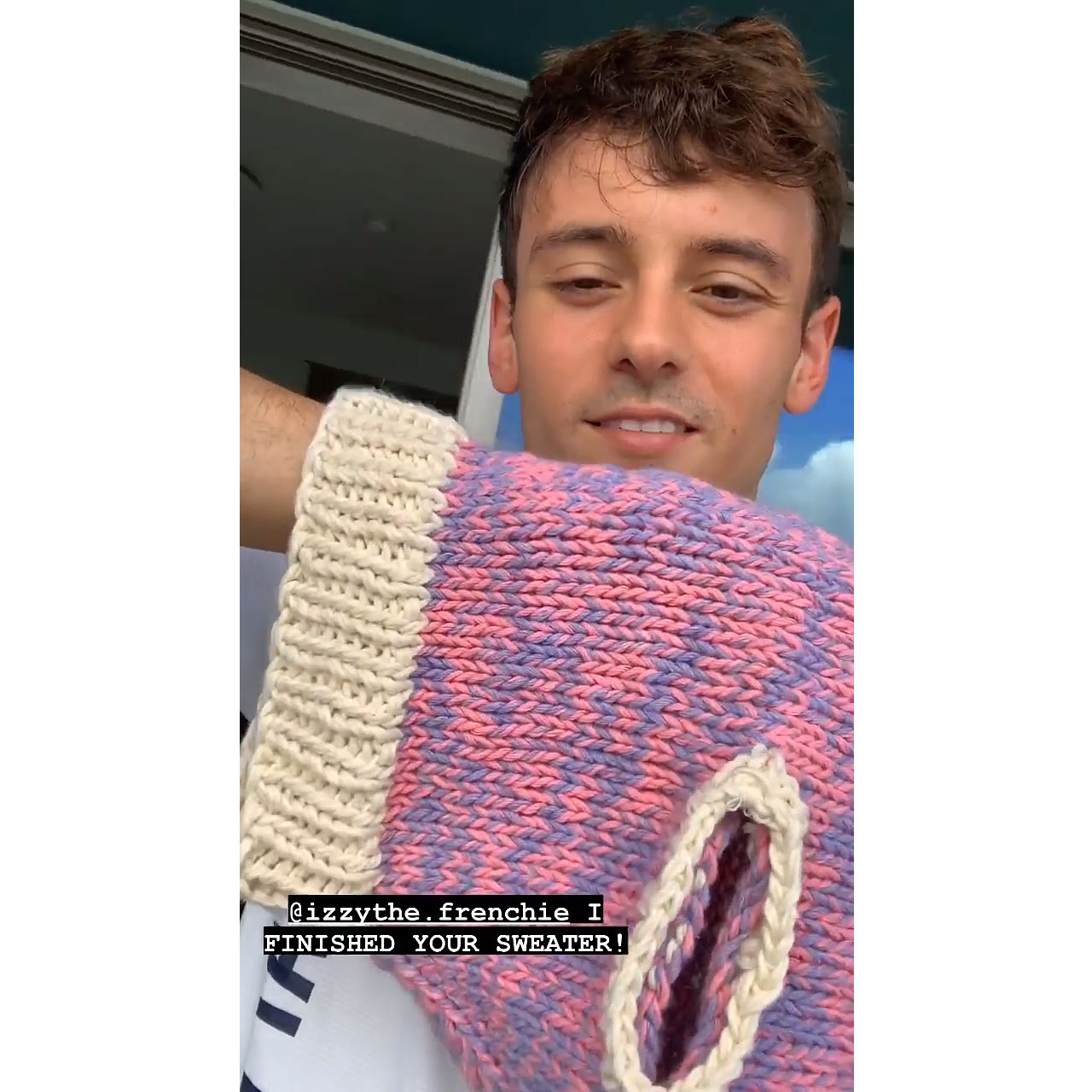 Prior to crafting the popular puppy outfit, the television personality shared that he’d made a pouch for his gold medal.

“Learning to knit and crochet has helped me so much through these Olympics and we won GOLD yesterday 🥇 I made a little medal case too! 🇬🇧🇯🇵 YAY!” he wrote via Instagram on Tuesday, July 27. Daley then showed off his work, which featured a U.K. flag on the front and Japan flag on the back.

In the post’s comments, fans joked that they hoped the athlete had made more pouches for his fellow teammates — and his future prizes. 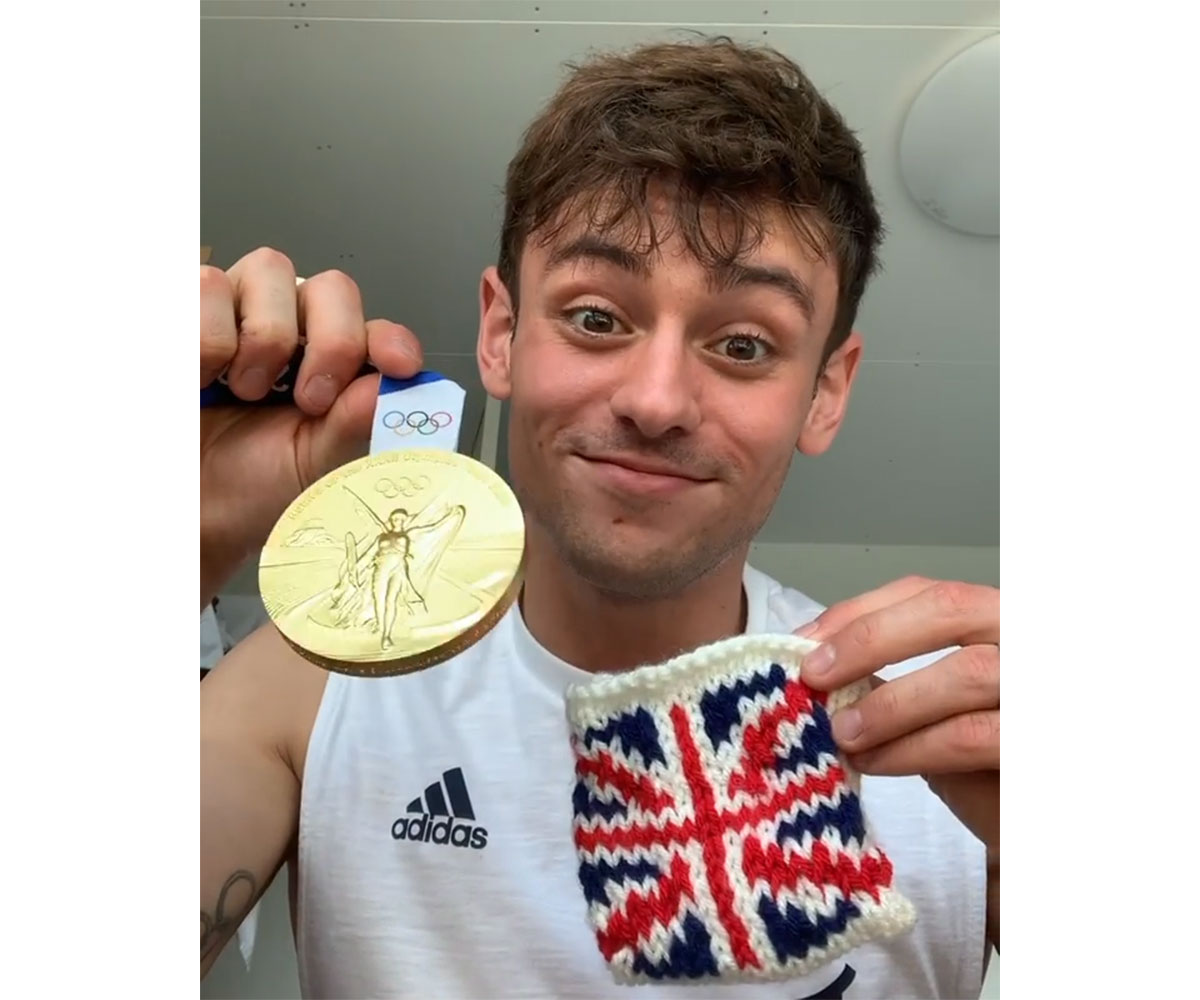 “I love this! Amazing knitting AND diving,” one social media user wrote. A second chimed in: “I hope you kept the pattern in mind to knit another one really soon !!!”

Celebrity Pets That Have Their Own Social Media Accounts

Daley’s knitting Instagram account is currently set up to raise money for charity with a handmade rainbow sweater raffle. As of Monday, August 2, he’d raised just under $3,000 via the account for The Brain Tumour Charity.