A mum has revealed how she slashes cooking time in her home by using a huge three-pot slow cooker.

The mum shared a picture of the huge slow cooker packed with lamb shanks, beef stew and a beef joint.

She said she had seen the cooker at Sainsbury’s but bought one for half the price on Ebay. 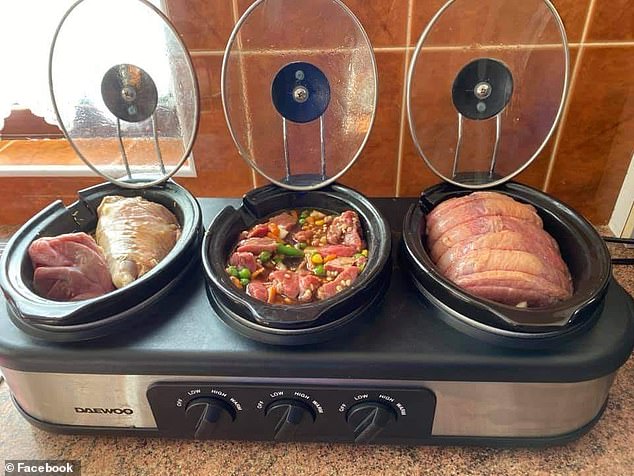 After using the new cooker she said the expensive one would still be worth it.

And other slow cooker lovers were on board with the three-dish cooker.

‘I love my slow cooker but I would love this one even more,’ said one home cook.

‘I have never seen a three pot one before – it looks perfect for a large family,’ said another.

While others who have tried the larger cooker also commented on the post.

‘These are in Lidl and Aldi regularly, I absolutely love mine,’ said another.

The slow cooker also has metal lid holders for each of the pots.

WHAT DID THE MUM COOK IN HER THREE-POT SLOWCOOKER?

The three-pot slow cooker can save home cooks time with their weekly meal preparation.

The mum described the meals she cooked in her new three-pot cooker – and said each took about five hours.

Use cubed beef and frozen vegetables. Onion, garlic and gravy granules. Stir together with pearl barley. Cook for 5/6 hours.

Place beef on onion slices and add gravy with crushed garlic. Serve with vegetables and mash or roast potatoes. Not sure how long to cook yet, will keep eye on it so it doesn’t go dry.

Just add freshly crushed garlic and some dried rosemary to the gravy granules and pour over the shanks. Cook for 5/6 hours depending how you like your lamb.

This three-pot slow cooker comes after home cooks revealed their hack to making two meals in one pot.

One hack involves using separate liner bags inside the slow cooker to prepare each meal.

The savvy insight was shared with hundreds of other home cooks online who were impressed with the convenient idea. 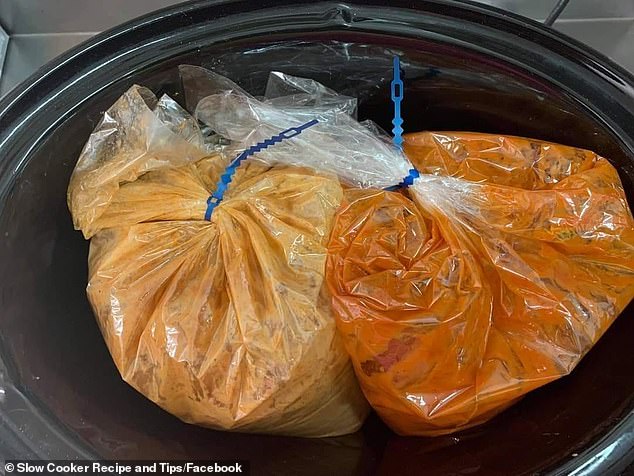 ‘I tried the oven bag idea and I love it! So easy!’ the home cook captioned the post and revealed she made butter chicken and beef Massaman curry at the same time.

‘Placed all ingredients in respective bags, set and forget for four hours on auto.

‘[The] chicken and beef were both cooked to tender – easiest way to get out the bag is to pour into a jug and then serve.’ 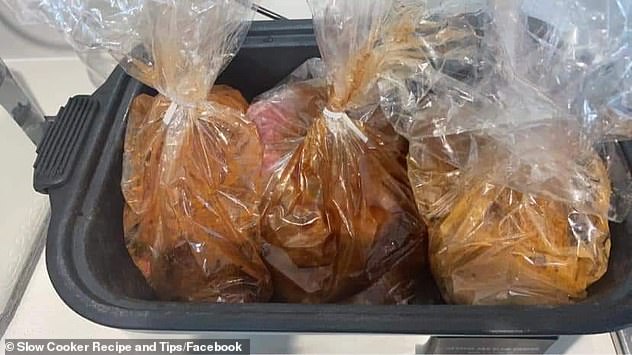 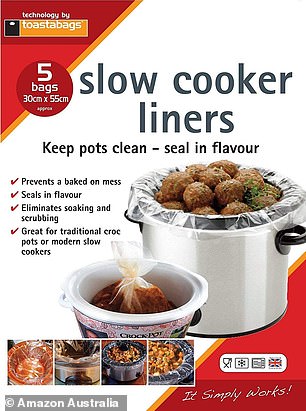 Others online recommended purchasing the Amazon pack of five liners for as little as $15 with shipping.

The cooking bags prevent mess, eliminate cleaning time and seal in the flavour of the food.

It’s best to use a bag that’s specifically designed to be placed in a slow cooker to avoid breakage.

If using a standard bag, pierce a hole at the top to allow the hot air to flow through.

Also ensure the bag isn’t tied too tightly, as the food needs room to cook.

For those who are environmentally conscious, reusable silicone bags are available online at various retailers including Kogan and Amazon.

‘Genius!! My husband always moans that I never cook anything spicy (myself and the kids don’t like it) will be searching for these,’ one person said online.

‘Sounds like a great idea for someone who is single and wants to make multiple smaller meals!’ another said.