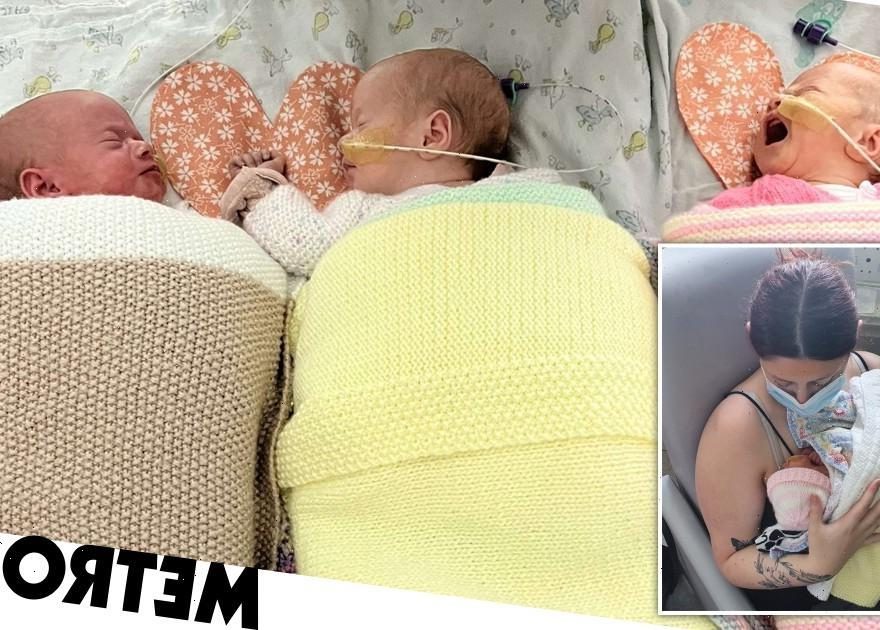 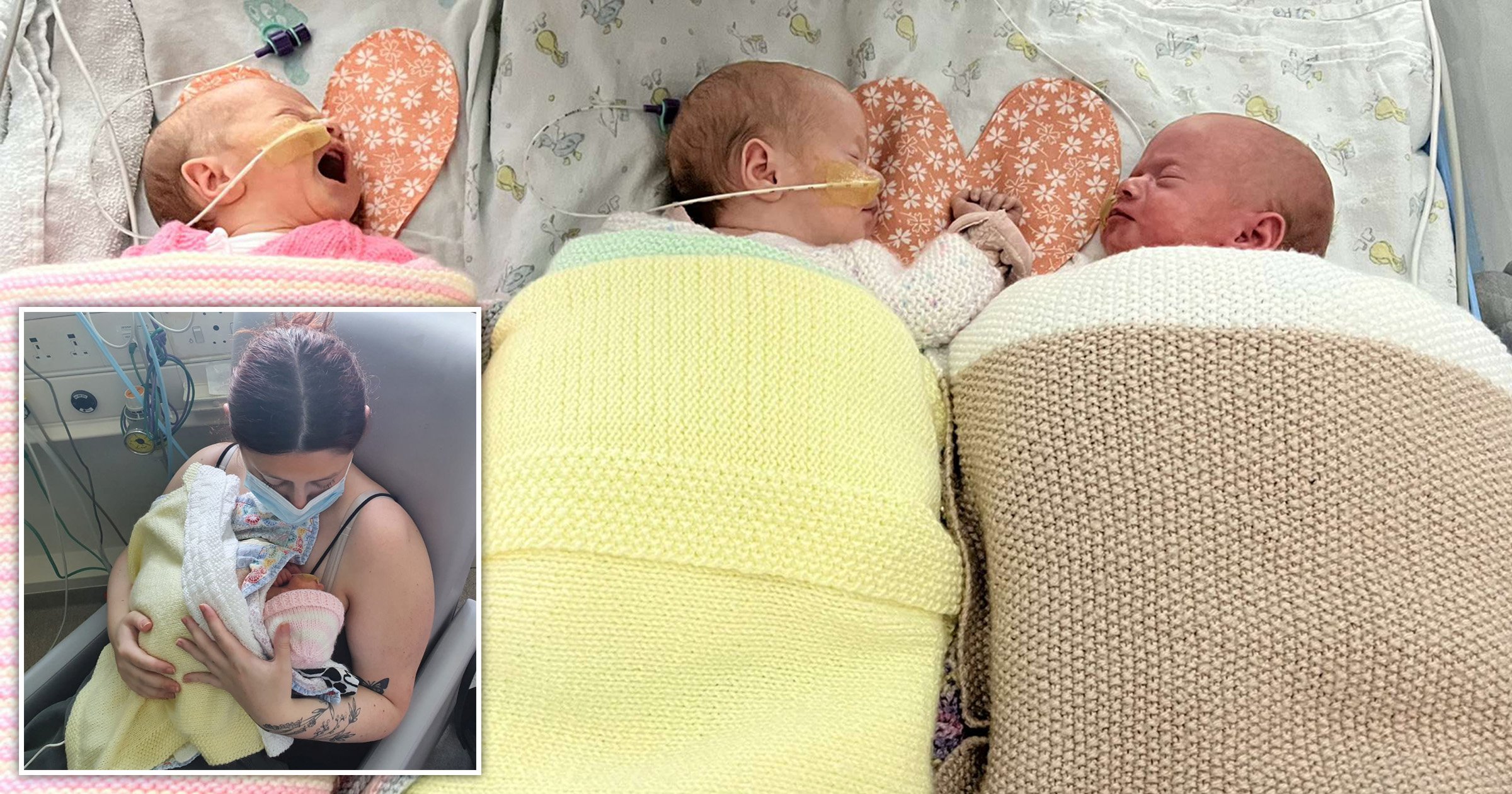 Jake Hammerton, 22, and partner Caitlin Knight, 20, were thrilled when they discovered Caitlin was pregnant for the first time – despite them having used contraception.

They were then more than a little taken aback when, at their 22-week gender scan, the couple were told they were having identical triplet boys – a one in 200million case without IVF.

The pair started to prep for their three new arrivals, picking out names, buying toys, and decorating the nursery.

But when the babies arrived, another surprise was in store: the triplets were in fact girls.

‘It was definitely a shock getting three daughters instead of sons,’ said Jake.

The new parents’ story began back on February 14, when they discovered – despite having not planned to get pregnant and using contraception – that Caitlin was pregnant.

Two months later, on Jake’s birthday on April 5, they were told they were having three children in one go – all boys, and identical.

As the planned caesarean section date of September 2 loomed, the parents-to-be, who are currently in the process of buying a house, selected names for their sons.

They chose Theo, Luca and Jude for their little boys and nervously awaited their arrival.

Caitlin began getting back pains on August 24, and they began fearing something was wrong with the babies – until Caitlin’s waters broke.

She was rushed into hospital for an emergency caesarean section and the triplets were born early in the morning of August 25.

But to the parents’ shock, all three of their newborn ‘sons’ were in fact baby girls.

Jake said: ‘We had no idea until the moment they were born. We checked lots of times and every midwife said they were all boys.

‘Then they began pulling out the babies and when I went to look after, I saw they all had little pink hats, not blue.

‘I told Caitlin and she didn’t even believe me. The doctors had to convince her I was telling the truth.’

Caitlin added: ‘Jake told me and I said “don’t joke like that, it’s not funny!” but he wasn’t joking.”

The baby who was going to be Theo became Thea, Luca was changed to Lily, and Jude got swapped for Esmae.

Thea had to be rushed off for treatment due to her tiny size but Caitlin and Jake had a moment to cuddle with the other two girls before they also were taken to the NICU.

Caitlin said: ‘When I saw the babies for the first time, I just cried. I was so overcome with emotion.’

The parents had prepared a nursery for the triplets, but luckily it was all in neutral tones – so they didn’t have to redecorate.

The toys they bought, however, were quite traditionally boyish, so they donated these to charity. Thankfully, their family bought plenty of toys to replace them.

Jake said: ‘We didn’t really mind the fact the genders were different than what we were told. We were really shocked, but they were healthy which was the main thing.’

The babies remained in hospital in different cots for 18 days, until Thea was finally able to be taken off a ventilator on September 11.

Then, the trio finally shared a cuddle in the same cot for the first time since their birth.

Jake said: ‘We could tell they definitely knew each other when they were together. They kept putting their hands on each other’s faces.

‘They’re all developing their own personalities. Thea is so feisty and keeps ripping out her tubes. Esmae is always smiling, and Lily is so lazy – she just sleeps all day!’

Now, the parents are waiting for the babies to grow stronger so they can finally bring them all home, which doctors say may be as soon as mid-October.

Caitlin said: ‘I can’t wait to bring our babies home, and just get on with it ourselves. Nappies and feeding without all the wires.’

‘It’s been a strange experience but I don’t think there’s anything to compare it to,’ added Jake.

‘We’re excited to have them home together – it will be a shock, but not as much of a shock as finding out our three boys were three girls!

‘Bringing them home will definitely be a challenge, but it’s one we’re ready for.’