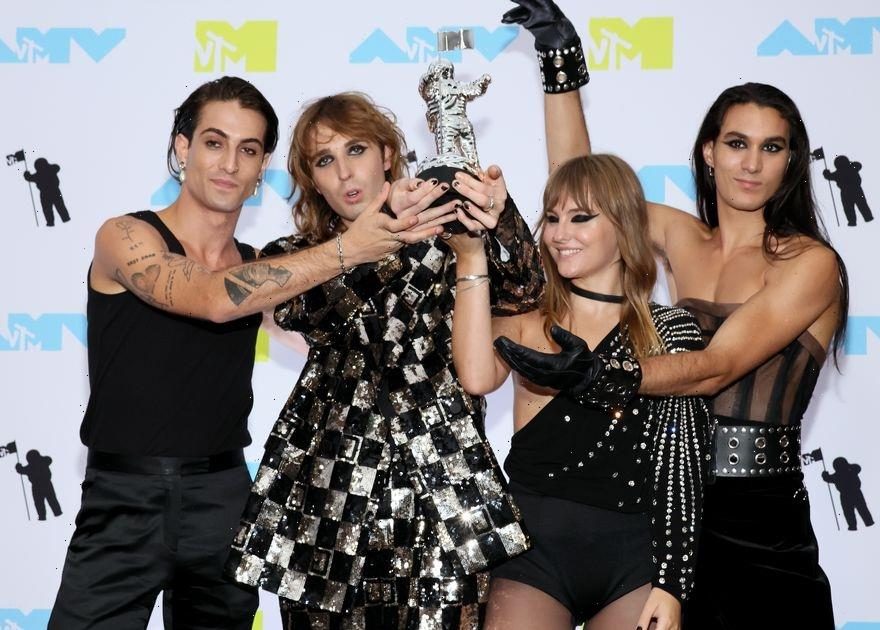 This year’s was led by hosts Nicki Minaj, LL Cool J and Jack Harlow and kicked off with a trip down memory lane as Fergie made a surprise performance.

It ended on a high note too when Taylor Swift announced her new album, with a sprinkling of surprises in between as Johnny Depp showed off a rather different side to himself as he tried a new gig.

Fergie surprised fans when she took to the stage for the first time in years.

The singer, 47, appeared on stage dressed in a glitzy outfit stamped with a “First Class” logo, and sang “Glamorous” alongside co-host Jack who samples her song on his hit Come Home the Kids Miss You.

When the track earned Jack the song of the summer award, he thanked Fergie for clearing the sample and called her 2007 hit one of the “biggest songs, most important songs of my childhood — it influenced my whole style so ‘First Class’ is me!”

Among the show’s biggest moments was Taylor Swift shocking fans with the announcement of a new album set to drop on 21 October.

The reveal came while she was accepting the award for video of the year, which she won for “All Too Well”.

The 32 year old singer said: “You guys, I’m just so proud of what we made, and I now that every second of this moment that we wouldn’t have been able to make this short film if it weren’t for you, the fans.

“Because I wouldn’t be able to re-record my album [‘Red (Taylor’s Version)’] if it weren’t for you. You emboldened me to do that. And I had sort of made up my mind that if you were going to be this generous and give us this, I thought it might be a fun moment to tell you that my brand-new album comes out October 21. And I will tell you more at midnight.”

Johnny Depp made an appearance at this year’s VMAs in a rather unusual form.

The actor, 59, was a Moon Man during the ceremony, popping up with a few lines before floating off again.

He wasn’t there in physical form, but instead his face appeared in the Moon Person’s helmet.

He said: “And you know what? I needed the work”. In a clip posted to his Instagram, Johnny added: “I just want you guys to know that I’m available for birthdays, bar mitzvahs, bat mitzvahs, weddings, wakes, any old thing you need.”

The metaverse was a recurring theme of this year’s show, with plenty of references to the new technology both on and off the main stage.

Eminem and Snoop Dogg gave an unique in-person and “otherside” performance of their track “From the D 2 The LBC” as Bored Apes.

While most of the performances were filmed on location at the Prudential Centre in New Jersey, Bad Bunny made history performing “Titi Me Pregunto” from New York’s Yankee Stadium where he accepted the award for artist of the year.

Italian rockers Måneskin took centre stage with a rendition of their track “Supermodel” at the VMAs.

During the performance, singer Damiano David, 23, showed off his derrière in a pair of black chaps he wore over a jock strap.

Scenes of his bum were censored by MTV, much to the dismay of Twitter users who branded the scenes “pathetic”.

Red Hot Chili Peppers’ Flea got the bleeping machines working overtime with his speech when the band won the award for best rock for their 2022 song “Black Summer”.

Not only did he present many F-bombs throughout his speech, he also confused the audience with what he said.

“I love cockroaches and dirt and trees and every human being in the [bleep]. And fishing, and deers, and deer antlers, and birds, and the sky and love. And everything that isn’t love is cowardice. I love you.”

Harry Styles’ virtual trip despite being down the road

Harry Styles was a winner on the night when he picked up the Album of the Year award for “Harry’s House”.

However, the 28 year old left many confused when he chose to accept his award virtually despite being down the road from the venue awaiting his performance in Madison Square Gardens.

Sheri Easterling aka Addison Rae’s mum made an appearance on the red carpet, though not with her daughter.

Sheri, 42, was on the arm of Yung Gravy, 26, and the pair even shared a kiss before heading to the ceremony.

The musician even bragged to reporters at the event: “I'm into MILFs.”

“I'm into MILFs and she’s kind of the queen of MILFs, so I figured it was just the perfect match.”