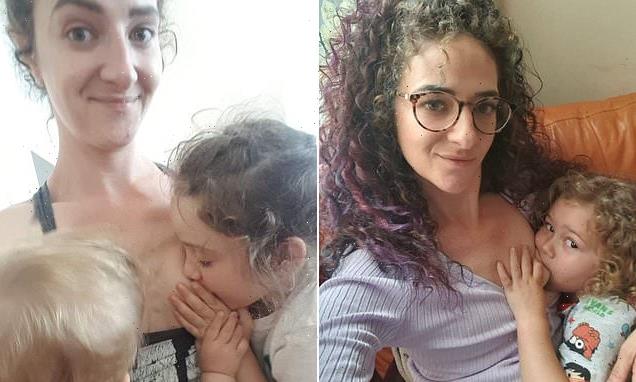 Mother who still breastfeeds her son, 4, and did the same with her daughter until she was 5 claims too many mums bow to ‘peer pressure’ to stop nursing before they want to

A mum who breastfeeds her four-year-old son has said that she ‘doesn’t give a damn what anyone thinks.’

Beccy Ashe, 35, from Mossley Hill, Liverpool, is still breastfeeding Tobias, four, and also breastfed her daughter Daisy until she was five and in school.

The mother-of-two says the emotional bond and closeness breastfeeding can bring, as well as the added nutritional value and health benefits, cemented her decision to continue breastfeeding her children as they got older.

‘My son Tobias, who’s four, still breastfeeds,’ she said, speaking to Liverpool Echo. ‘He’s pretty much down to morning and night now since he started nursery six months ago.

‘With nursery it’s a great way to bond and reconnect at the end of the day. It’s so much comfort, it’s nutritious, it’s got pain relief. It’s more than just giving them a feed.’ 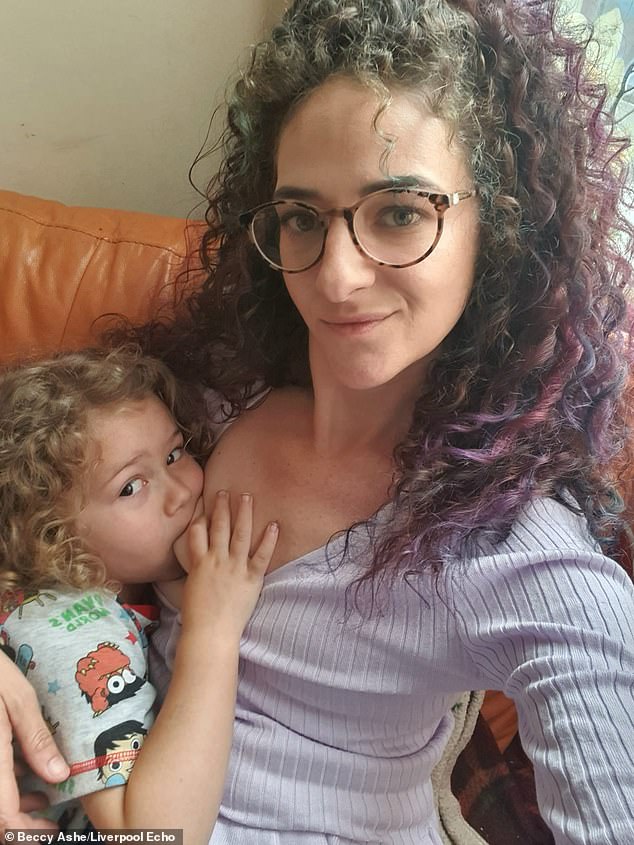 Beccy Ashe, 35, from Mossley Hill, Liverpool, is still breastfeeding Tobias (pictured, together), four, and also breastfed her daughter Daisy until she was five and in school

She continued: ‘The benefits to the mum are big as well. The longer you breastfeed, the risk of some cancers reduce too.’

Becky, who is speaking out to mark the start of Breastfeeding Awareness Month, says when her children got older, she spent six months slowly weaning her daughter off breastfeeding – and is likely to do the same when it comes to her son.

‘I don’t do it as often now, it’s not on demand now he’s older,’ she explained. ‘He has it in the morning when he wakes up and he has some before he goes to bed.

‘He asks for more than that in a day but I tell him no. That’s a lesson for him in teaching body autonomy in the sense that this is my body and I get to say what happens to it.’

Advice in the UK is that women can breastfeed for as long as they and their child want to, and the NHS does not specify a time when women should stop giving their child breast milk. 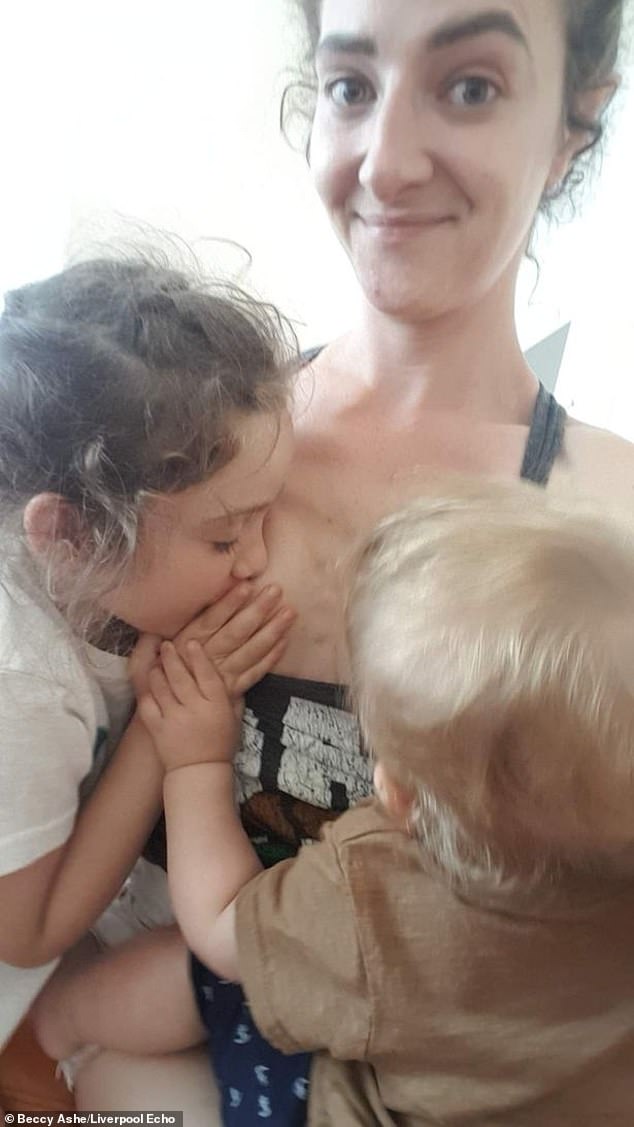 Becky says when her children got older, she spent six months slowly weaning her daughter off breastfeeding – and is likely to do the same when it comes to her son. Pictured, together

Despite this, Beccy believes a lot of mums stop breastfeeding sooner than they want to because of ‘peer pressure’, and what is portrayed as the ‘societal norm.’

She is keen to educate other mums on the benefits of breastfeeding and encourage them to do whatever feels best for them and their child.

‘If you want to ask questions I’m happy to answer them – it’s fine to be curious and ask questions,’ said Becky.

‘I’ve never faced any negativity really or judgement and, in all honestly, I don’t give a damn what anyone else thinks about me, it’s not my problem what they think. I will always advocate for women to breastfeed for as long as they want to.’

Despite championing the benefits of breastfeeding, Beccy said she recognises some of the struggles other mums may have when beginning to breastfeed their child.

In a previous interview with the publication, she said: ‘You get told here’s your baby, you put them on the boob, but people don’t realise it’s a learning journey for mum and baby.

‘You have a baby and they learn to walk, they don’t just know how to walk. And it’s the same with breastfeeding, they have to learn to latch properly and feed efficiently.

‘I’ve heard from women who’ve said they were told by doctors and midwives they can’t breastfeed, just stop and give them formula, and that’s so disheartening to feel like a failure as a mother and like they’re meant to provide this nutrition for their baby.’

As well as support from mother and baby groups, Beccy also became a peer mentor for Liverpool Bambis, an information and support service for breastfeeding families 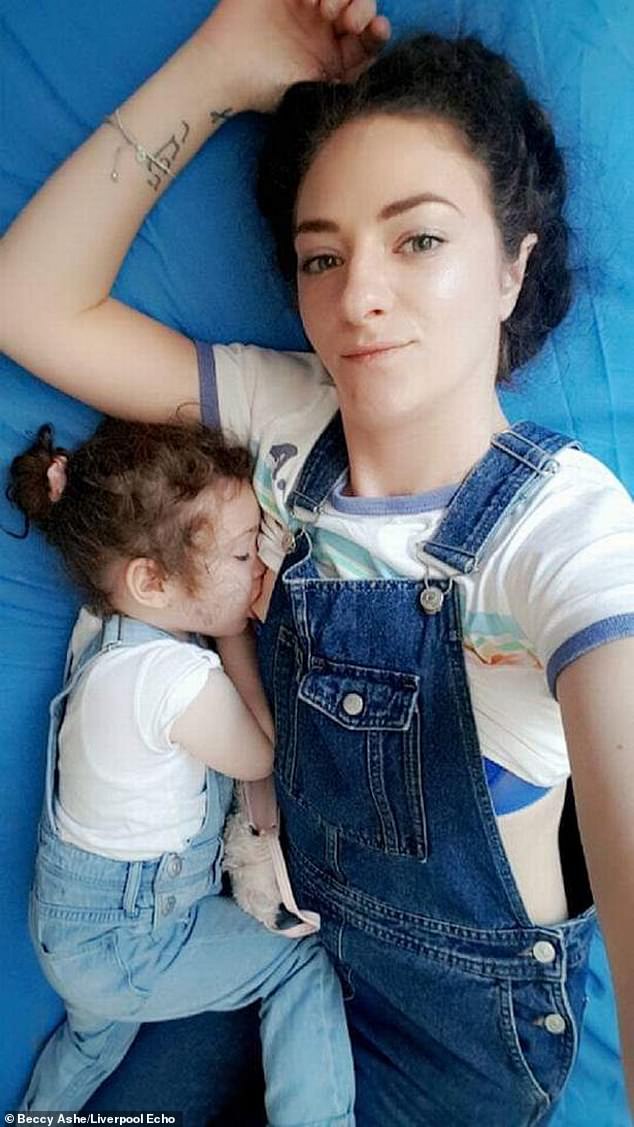 The mother-of-two says the emotional bond and closeness breastfeeding can bring, as well as the added nutritional value and health benefits, cemented her decision to continue breastfeeding her children as they got older. Pictured, Beccy breastfed her daughter Daisy until she was five years old

‘Being able to help other mums was amazing and to share similar stories with other people. Everyone has up and down days, and just to know that everyone has down days the same as you, but then it gets better,’ she explained.

‘People don’t realise that even if you struggle breastfeeding, it means you don’t have to stop and use formula. There’s so many other options before you give up, if you like.’

She added: ‘My advice to new mums would be reach out to every support system you can find, there’s Facebook groups and plenty of websites online.

‘Never be afraid to ask any question no matter how silly you think it might be. And never give up on a bad day, because the next day could be so much better.’

Liverpool Bambis said: ‘Bambis have supported over 26,000 mums on their breastfeeding journey and our rates in Liverpool are increasing yearly.

‘Initiation is now 59% so not far behind the national average of 67%. We are really proud of the support we have offered and continue to offer during these difficult circumstances we find ourselves in during lockdown.’