An amused mother has revealed the very funny results after her young daughter decorated her mother-in-law’s Christmas tree – but could only reach the bottom branches.

The unnamed toddler’s mother, who lives in Florida, posted a snap of the tree on Twitter and explained how the doting grandmother had let the toddler place the baubles wherever she so chose.

The adorable photos revealed that only the bottom of the tree had been generously covered in ornaments because it was the only section the little one could reach, while the middle and top sections of the tree remained empty.

Social media users thought the photo perfectly captured the essence of Christmas and praised the sweet grandmother for allowing the child to pick the decorations. 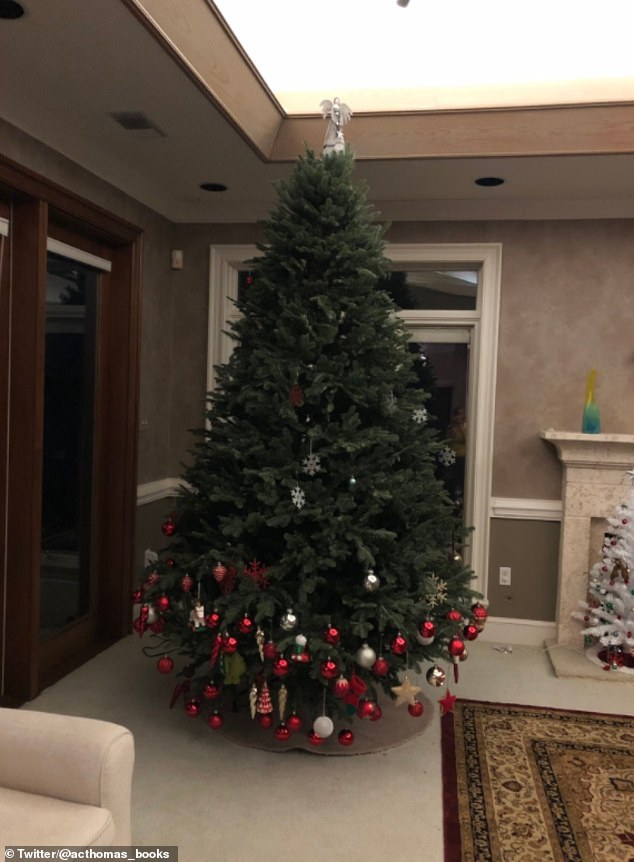 A mother from Florida revealed her mother-in-law let her toddler decorate the Christmas tree, with hilarious and sweet results (pictured)

In the initial post, the toddler’s mother penned: ‘My toddler decorated my mother in law’s tree.’

The picture shows the toddler had selected beautiful golden and red hanging decorations, all located at the bottom of the tree.

However, eagle-eyed fans spotted that an adult had given the child some lift so they could hang decorations a bit higher.

The grandmother supposedly added the tree topper herself, while snowflake ornaments and a lone red bauble could be seen higher up.

The mother shared a plain explanation, along with the picture of the tree, which was empty in the middle section and overflowing with decorations at the bottom

The snap of the tree left many in stitches, while others praised the child’s artistic eye. Others added they hoped the grandma would leave the tree as it was.

‘The bottom looks really nice. Your kid has a good eye. Just needs some height,’ one joked, while a second commented: ‘Adorable. This would make a great Holiday growth chart over the years.’

A third added: ‘This actually looks better than it would be completely decorated It looks like it’s dripping red,’ while a fourth penned: ‘She better not change a thing.’

Another wrote: ‘A fantastic job! I like the rustic simplicity of the top and how it really enhances the elaborate, ornate bottom section,’ while a further commented:

‘Your kid has a real talent for decorating. That looks great.’

People loved the sweet snap of tree, with many saying the child had a good eye, and others advising the grandmother keep the tree as it is (pictured)

'Stranger Things': How Winona Ryder's Relationship With Johnny Depp and a Hometown Murder Case Inspired Her Role in the Netflix Series
World News