Single mother, 49, reveals how empty nest syndrome when her sons left home led her to adopt a girl, six, who had been chronically neglected

A mother has revealed how she adopted a daughter after struggling with being an empty nester when her two sons left home.

Louisa, 49, of Birmingham, found herself rattling around the house when her eldest son Luke, now 31, left for university and her youngest Reiss, now 26, moved in with his girlfriend.

Realising she had the energy, time and love needed to give a child a ‘forever’ home, Louisa registered with Bernardo’s.

In August 2016 – following months of paperwork, interviews and health and safety checks – she was ‘matched’ with a six-year-old girl named Polly (whose name has been changed), who had been taken into care after suffering chronic neglect.

Speaking to Femail, the proud mother-of-three recalled the joys of sharing their first milestones over the last two years – and admitted it feels like she’s ‘always had’ Polly.

‘It’s been a life-changing experience,’ Louisa said. ‘Polly is an absolute dream, a gem, and the centre of my universe.’ 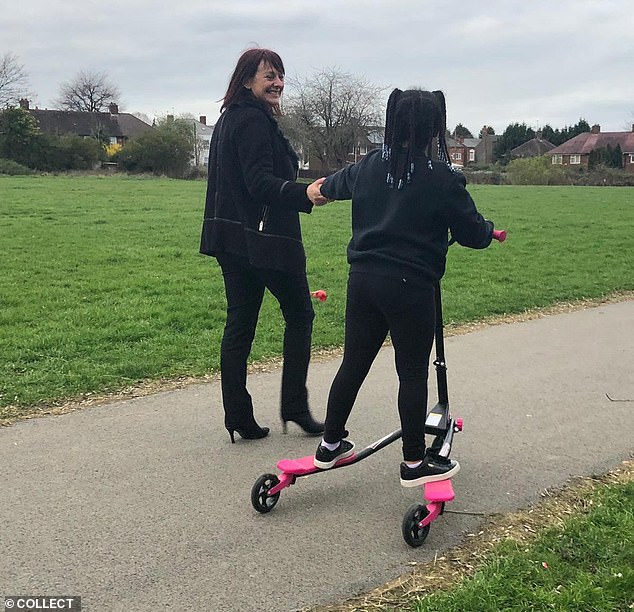 Louisa Palmer*, 49, of Birmingham, adopted daughter Polly after struggling with being an empty nester when her sons left home. Pictured, mother and daughter in the park

It was December 2014 when Louisa, who had been a single mother for most of her life, decided she wanted to adopt.

With the support of Bernardo’s, Louisa attended courses and support groups, receiving training about the difficulties adopted children might have.

‘There was a really good support network and I could speak to other adopters at different stages of their journey, which was a great help,’ Louisa continued.

‘After some 10 months I had to appear before a panel but Barnardo’s put me at ease and told me what to expect, so I was really well-prepared. I was approved to adopt.’

It was 10 months later, while Louisa was on holiday in Wales, that she received the phone call telling her there was a ‘match’. 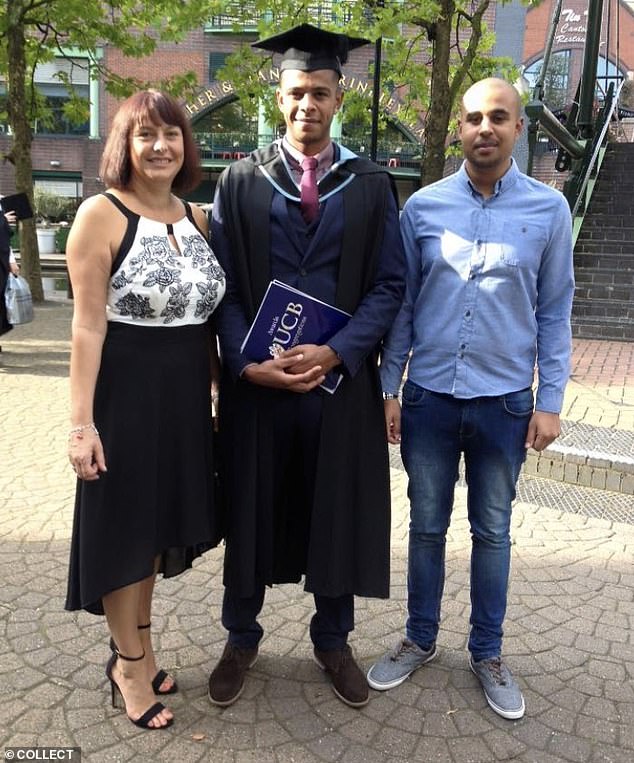 Louisa found herself rattling around the house when her eldest son Luke, now 31, left for university and her youngest Reiss, now 26, moved in with his girlfriend. Pictured, proud mother Louisa with sons Reiss and Luke at Reiss’s graduation in July 2014

‘Everything seems to click into place,’ Louisa recalled. ‘I was sent a photograph of her and was instantly smitten. When I sent the photo to my family they said she looked just like my eldest son when he was younger. She had a cheeky smile and looked like lots of fun.’

Louisa continued: ‘On the first day it was arranged that I would go and visit her for about an hour at the foster carer’s house.

‘I arrived at the house and knocked at the door. My daughter opened the door with a huge grin on her face. I said to her, “I know who you are, you’re Polly!” She replied “and you’re my Mummy!” She took my hand and led me into the room.’ 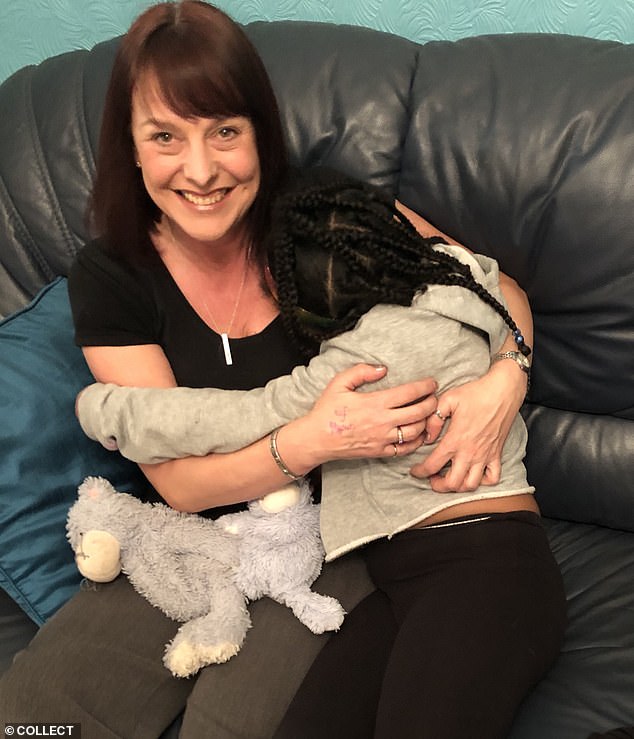 Louisa was immediately ‘smitten’ with Polly’s ‘cheeky’ smile after seeing a photo in August 2016. Two months later she brought her daughter home. Pictured, Louisa with Polly

Ahead of the meeting, Louisa had sent Polly a book filled with pictures of her new brothers, nieces, her pet dog Bobby – and her new bedroom.

‘We sat together on the sofa looking at the book,’ Louisa continued. ‘It was obvious she had spent a lot of time studying it and had apparently been showing everyone her “new family”.’

Over the coming days Louisa and Polly spent more time together, heading out to local attractions as they got to know each other. After a few days Polly and her foster carer visited Louisa’s house for the afternoon, bringing with them some of Polly’s toys to leave in her new bedroom.

A week after the first meeting, Polly moved in.

Louisa continued: ‘She waved goodbye to her foster carers and had a beaming smile on her face. We chatted during the long journey to our new home. I felt I needed to fill the silences so chatted to her about her likes and dislikes. 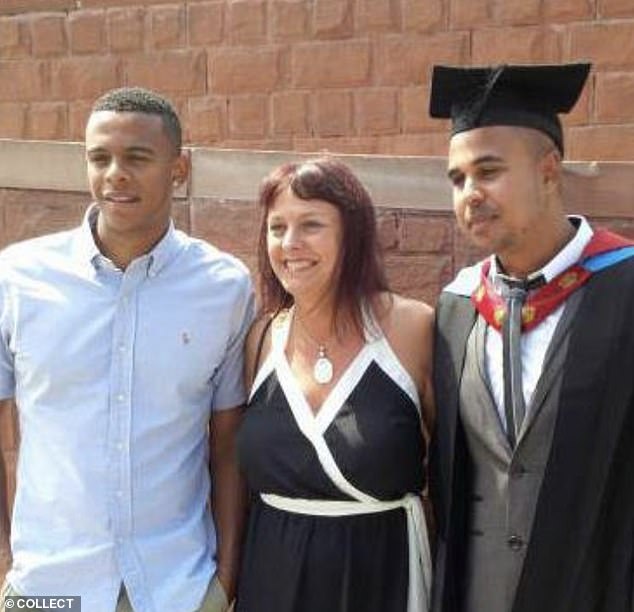 Louisa found it ‘surprisingly natural’ to hear Polly call her ‘Mummy’ and soon started to enjoy their first milestones together. Pictured, Louisa with her sons at Luke’s graduation in July 2013 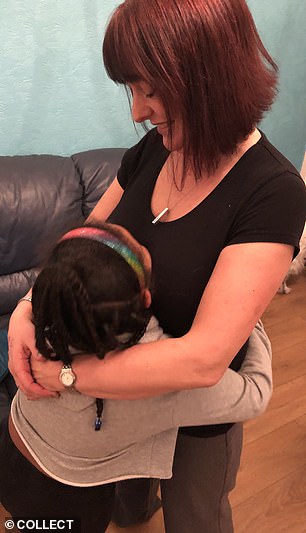 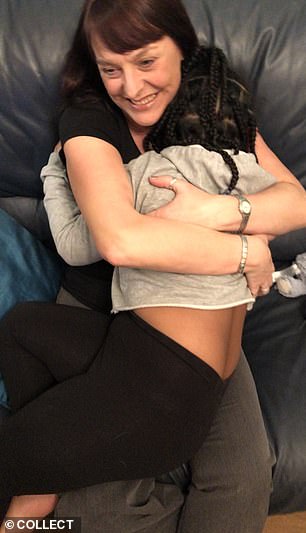 Proud mother-of-three Louisa recalled the joys of sharing their first milestones over the last two years – and admitted it feels like she’s ‘always had’ Polly, pictured together left and right 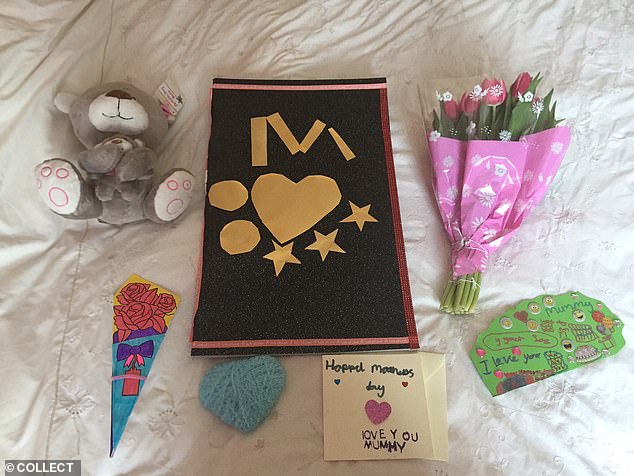 ‘When we reached home I gave her the key to the front door and said, “Welcome to your forever home”. She stretched up onto her tiptoes and put the key in the lock.’

‘She went straight up to her new bedroom to explore. A couple of hours later she was bouncing around and laughing on her new trampoline with her cousins.’

Louisa found it ‘surprisingly natural’ to hear Polly call her ‘Mummy’ and soon started to enjoy their first milestones together.

‘Another morning I came downstairs and she was already in her school uniform and had made a packed lunch for me. It was such a nice surprise and I asked why she’d done it. She said, “To thank you for adopting me”. I said, “You never need to thank me. I should be thanking you”.’

Polly had been born into a large family and had suffered from chronic neglect, but she struggles with the feeling that she hadn’t done enough to ‘protect’ her younger siblings.

Louisa continued: ‘Polly occasionally comes down after going to bed upset as she feels she should have protected her younger siblings, despite me telling her she was only five years old herself and it wasn’t her job to protect them. 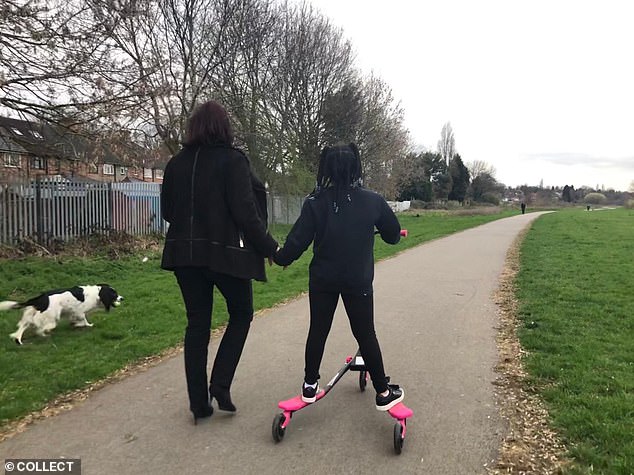 Polly had been born into a large family and had suffered from chronic neglect, but she struggles with the feeling that she hadn’t done enough to ‘protect’ her younger siblings. Pictured, Polly and Louisa hold hands in the park

‘She gets upset and says she misses her siblings. She was with them for the first six years of her life so has got a bond with them. I am hopeful in the future they will all be able to meet up once they are all settled in their own new adoptive homes.’

While there have been ‘bumps along the way’, the ‘pros definitely outweigh the cons’.

Louisa added: ‘Two years on from the adoption, I feel like I’ve always had her. She’s enriched my life, and she’s enriched the lives of my own sons too, who idolise her – and she loves having two big brothers!

‘We now also have a phrase which we both race to say to each other, when she wakes up in the morning or before she goes to bed: “I love you, I love you most … said it first!”

*Louisa’s surname and Polly’s first name have been changed.

Barnardo’s, the leading children’s charity, is calling for more adopters to come forward and welcome a child into their lives. Whether you are single, an LGBT couple, someone with grownup children or have just always wanted to start a family, they want to hear from you. Visit www.barnardos.org.uk/adoption to find out more.