Premier Daniel Andrews’ push for a 12-month extension of Victoria’s COVID-19 state of emergency looks doomed to fail, with the majority of crossbench MPs in State Parliament’s upper house opposed to the move.

All but one of the crossbenchers who spoke to The Age on Tuesday morning said they were opposed to the government’s proposal and would vote with the Liberals and Nationals to defeat the move when Labor brings Parliament back to try to legislate its changes. 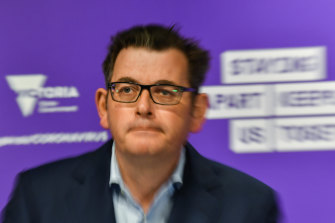 Andy Meddick of the Animal Justice Party is as yet undecided while two more crossbenchers, Rod Barton of the Transport Matters and disgraced former Labor minister Adem Somyurek, who remains in Parliament as an independent, could not be contacted.

But in the likely absence of Mr Somyurek and with the Greens' leader Samantha Ratnam on leave, Labor with its 17 upper house members needs 20 votes to overcome the bloc of 19 MPs – 11 Coalition and eight crossbench – who are now known to oppose the extension.

But there is enough support on the crossbench for three or even six more months of emergency powers to suggest that a compromise deal is possible.

Labor’s parliamentary challenge is further complicated by the advice of Chief Health Officer Brett Sutton that regional and rural MPs should stay out of Melbourne and not attend Parliament, depriving the government of the votes of ministers Jaala Pulford and Jaclyn Symes.

Coalition MPs from outside Melbourne as well as non-metro crossbenchers were prepared to defy Professor Sutton’s advice and turn up to Parliament in early August but it is unlikely government ministers would act against the health advice.

Mr Andrews is facing a broad-based backlash against the 12-month proposal with human rights advocates joining the Premier’s political rivals in criticising the move.

The Premier took to Facebook to stress the state of emergency extension was not the same as the state of disaster and that he was not proposing stage four lockdown measures such as Melbourne's 8pm curfew be extended.

Mr Andrews said the extended state of emergency would prolong "commonsense" rules on face masks and social distancing, which he said had driven down transmission of the virus.

"This is about ensuring that we can legally make the changes our health experts need to keep us safe … These changes are about saving lives and keeping Victorians safe – nothing more, nothing less," he wrote.

“I am not sure the Premier and his team have thought this one through properly, or perhaps they just didn’t see the backlash coming from the community – which you can see reflected in the mood of the crossbench,” Ms Patten said.

“As far as I can tell, the government doesn’t have the numbers to pass this bill.”

“I’m not happy with the legislation in the current form,” Mr Hayes said.

“The government needs to go back to the drawing board and completely rethink this legislation.”

“The extension of another entire year is a huge overreach.”