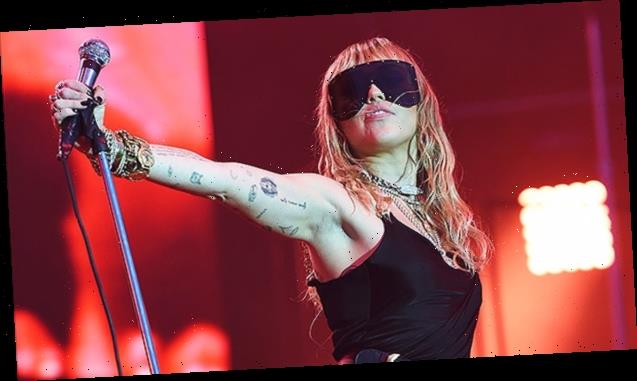 Miley Cyrus helped usher in 2021 with a killer performance of ‘Party in the USA’ during ‘Dick Clark’s New Year’s Rockin’ Eve’ special. We’ve got her amazing patriotic skin-tight outfit.

Miley Cyrus helped fans say farewell to 2020 in a COVID-19 safe way. The singer performed from a Hollywood studio on ABC’s 49th annual Dick Clark’s New Years Rockin’ Eve, hosted by Ryan Seacrest. The 28-year-old kicked off the telecast with a performance of her 2009 smash “Party in the U.S.A.” to get everyone amped for a night of killer music. Miley donned a patriotic outfit featuring skin-tight leather pants with red and white stripes on one leg, and blue and white stars on the other. She matched it with a red, white and blue leather motorcycle jacket as she belted out the tune.

While Miley used a festive party song to kick of the New Year’s Eve telecast, she’s due to appear throughout the show. She has two recent hits with the singles “Midnight Sky” and “Prisoner,” and shared in an Instagram post from her dress rehearsals that she’ll be dressed as a rock goddess later on.

Miley could be seen a black leather lace-up bra-top with studs along the edges. Her black leather pants featured open sides that were held together by a criss-cross lace-up design. She even donned black leather gloves and heavy silver and metal jewelry for the killer ensemble, where she added a dark lined smokey eye. Miley had given fans a sneak peek at her look during dress rehearsals, where she shared her full outfit, hair and makeup in Instagram photos.

Miley’s rocker chic look is one of several several aesthetics she’s gone through in 2020, including a late 1970s style where channeled her inner disco queen into a rocking version of Blondie‘s Debbie Harry, with her brilliant “Heart of Glass” cover. And has somehow Miley made her her amazing mullet hairstyle work with both a style from nearly 40 years ago in the disco age, and one that seems so fresh with her rocker look.

Miley fully embraced being a rock star for her new album Plastic Hearts, which became her first entry into Billboard‘s Rock Albums chart territory. After killing it in the world of pop music and even forays into country, Plastic Hearts debuted at number one on the rock album chart on Dec. 12, 2020. Not a bad way to end the year for Miley, who is quickly becoming the queen of reinventing herself. We can’t wait to see what she has in store for 2021. 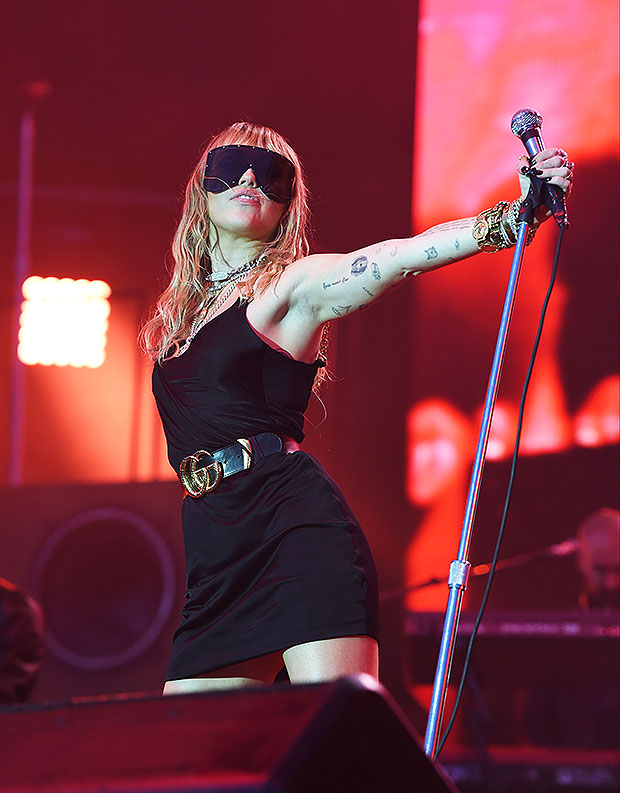 Miley didn’t take part in the New York City festivities for the special, which were highly limited due to crowd restrictions in Times Square and strict COVID-19 protocols for all of the performances. Jennifer Lopez headlined the night from Times Square. Also out of New York, Machine Gun Kelly and Jimmie Allen held their performances, while Billy Porter not only co-hosted hosted with Ryan, but reunited with pal Cyndi Lauper for a duet. Due to the COVID-19 pandemic, the New Year’s Eve ball celebration in Times Square went virtual for the first time in its 114-year history.

With several time zones to cover as 2021 rolled in and an 8 p.m. ET/7 p.m. CT start time for Dick Clark’s New Years Rockin’ Eve, producers promised a whopping five and a half hours of performances. In addition to Miley, JLo and MGK there were plenty of other artists lending their talents to the special, including Megan Thee Stallion, Doja Cat, Maluma, Nelly, Lewis Capaldi, En Vogue, Ella Mai, and Brandy. Ciara got to ring in New Year’s on the West Coast, hosting the show for the fourth year out of Los Angeles and helping celebrate as the clock struck midnight in the Pacific Time Zone.