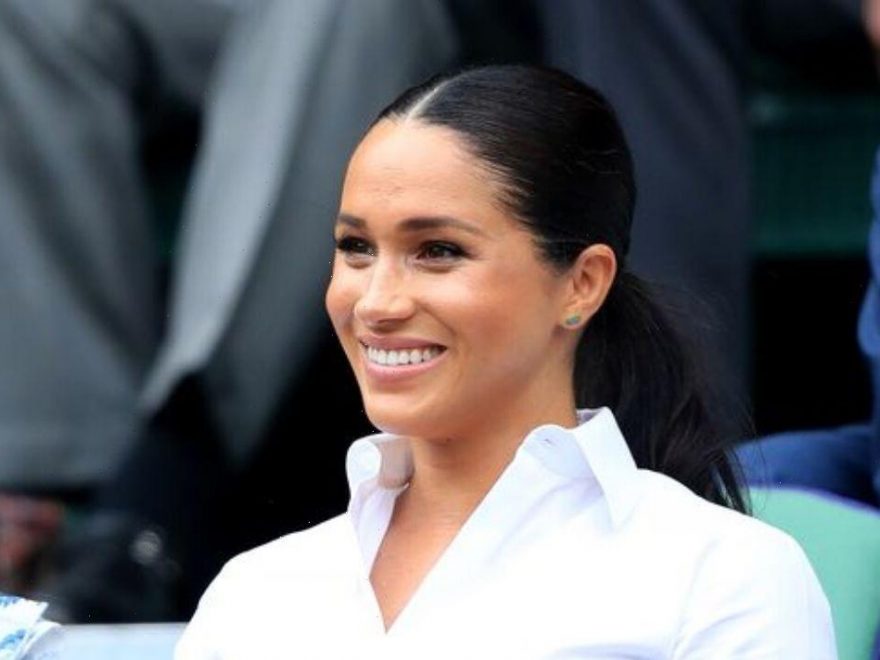 Meghan Markle, 41, attended a Women at Spotify event on Tuesday where she posed alongside other podcasters and activists. In one post by an Iranian women’s rights activist and also the president of Archewell, Mandana Dayani, the Duchess of Sussex could be seen lending her support to the women’s rights protests currently happening over in Iran.

Judi James, a body language expert, spoke exclusively to Express.co.uk to analyse the Duchess’ poses at the Spotify event with her Archewell colleague.

She claimed: “Meghan is making a very emphatic statement of solidarity here, posing using mirrored ‘equality’ body language that suggests the message on her T-shirt is one all women can share.” The T-shirt contains the words “women, life, freedom” in Iranian.

Judi added: “The linking poses with head closeness position her less as an A-lister and more as part of a group,” something which the Duchess may not have anticipated.

Meghan usually uses “her voice” when protesting a human rights issue, according to the body language pro.

Judi clarified: “Meghan’s normal ‘tool’ of campaign and protest is her voice, with her podcast and her speeches.” For instance, on her latest episode of Archetypes, the Duchess criticised her former TV show Deal or No Deal for prioritising her looks, “reducing her to a bimbo”.

The body language expert continued: “But here Meghan shows she is just as adept at making a non-verbal message that endorses the words written on her T-shirt.

“It should align her with the female-driven protests and might even be a lead-in to more active appearances or words from Meghan for this cause.”

The Duchess often lends her voice to issues happening around the world as a social activist that she feels strongly about.

For instance, she wrote a powerful letter to Nancy Pelosi this time last year to advocate for paid family leave.

In the letter, Meghan wrote: “I’m not an elected official, and I’m not a politician. I am, like many, an engaged citizen and a parent.

“And because you and your congressional colleagues have a role in shaping family outcomes for generations to come, that’s why I’m writing to you at this deeply important time—as a mom—to advocate for paid leave.”

Jon Briggs, the voice of Siri, spoke to Express.co.uk about Meghan’s letter and analysed her intentions.

He said: “Meghan’s starting stance is the most obvious. The line ‘I am not an elected official and I’m not a politician’ could almost include ‘but I’d like to be’ in parentheses.

“More interestingly although this is supposedly a letter, it reads as if it was a speech. This was written to be spoken aloud and has the hallmarks of a speechwriter about it.”

The Duchess also demonstrated her activism when she teamed up with feminist activist Gloria Steinem earlier this year to co-write an article for Vogue Magazine.

In the letter, Meghan slammed the US Supreme Court’s decision to overturn Roe v Wade and scale back abortion rights in America.

She wrote: “This is having a very real impact on women’s bodies and lives starting now. Women are already sharing stories of how their physical safety is being put in danger.

“Women with resources will travel to get an abortion, those without might attempt to give themselves one at tremendous risk. Some will have to source abortion pills from unregulated pharmacies.

“Others who are pregnant and find themselves in a medical emergency will be at the mercy of doctors and lawyers to determine if a procedure that is needed to save her life can even be done at all.

“What does this tell women? It tells us that our physical safety doesn’t matter, and as a result that we don’t matter. But we do. Women matter. And this is one of the reasons that I called Gloria immediately. Because in all of it, she reminds me that when you have anger, you have to channel that energy into something that makes a difference.”