The Duchess of Sussex, 38, who is currently living in Santa Barbara, will join a ‘When All Women Vote Couch Party’ with the When We All Vote initiative tomorrow alongside Glamour editor-in-chief Samantha Berry, actor Yvette Nicole Brown, businesswoman Valerie Jarrett and DJ Diamond Kuts.

When We All Vote was launched in 2018 by several co-chairs, including Michelle Obama, and is described online as on ‘a mission to increase participation in every election and close the race and age voting gap by changing the culture around voting, harnessing grassroots energy, and through strategic partnerships to reach every American.’

It comes weeks after Meghan confirmed that she plans to vote in the upcoming US presidential election, while urging others to ‘exercise their fundamental right’ in a rare interview. 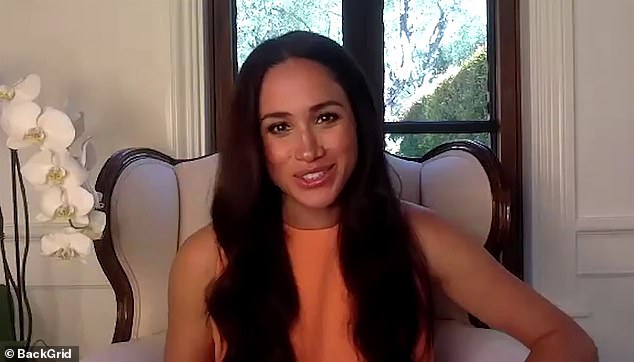 The Duchess of Sussex, 39, will join a virtual summit tomorrow with the When We All Vote initiative which aims to encourage voter participation in the US Online, the virtual summit is described as aiming to ‘honor the 19th Amendment, celebrate the women of color who have fought to make the promise of the 19th Amendment a reality for ALL women, and highlight the need to expand voting rights for marginalized communities.’

Discussions are set to include ‘talking about how we can reach out to as many people as possible to empower them to get registered and make a plan to vote this fall.’

The 39-year-old mother-of-one, who was born in Los Angeles, spoke to Marie Claire earlier this month about the importance of voting.

At the time the Duchess also shared a poignant quote from New Zealand’s most famous suffragist leader Kate Sheppard, revealing that both she and husband Prince Harry ‘have referred to [her words] often’ for inspiration and guidance. 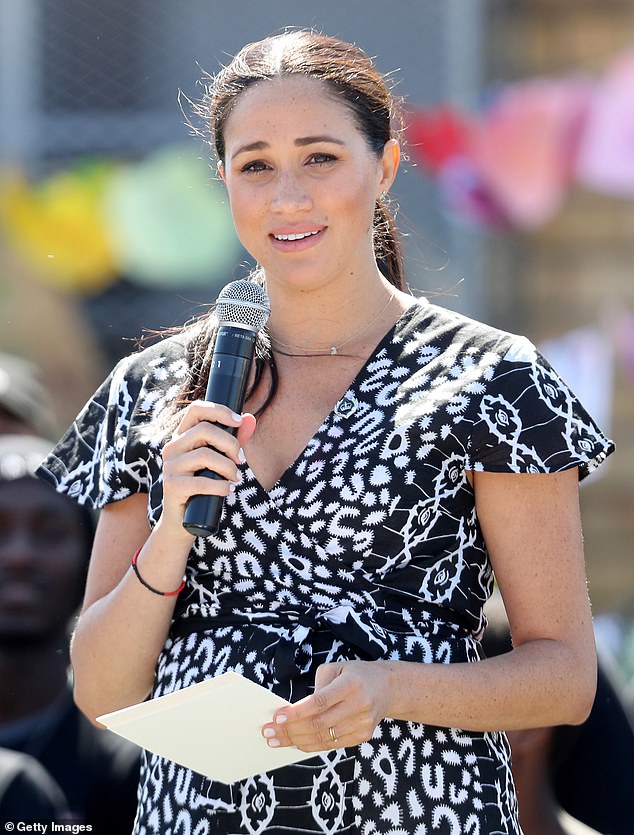 Speaking out: Meghan Markle has confirmed that she will vote in the presidential election this year, while urging others to ‘exercise their fundamental right’ in an interview with Marie Claire

‘I also know that so many men and women have put their lives on the line for us to be heard.

‘And that opportunity, that fundamental right, is in our ability to exercise our right to vote and to make all of our voices heard.’

She then shared a quote from Sheppard – New Zealand’s most outspoken suffragist leader whom Meghan has previously quoted – explaining that it is ‘one of her favorites’ and ‘one that my husband and I have referred to often’. 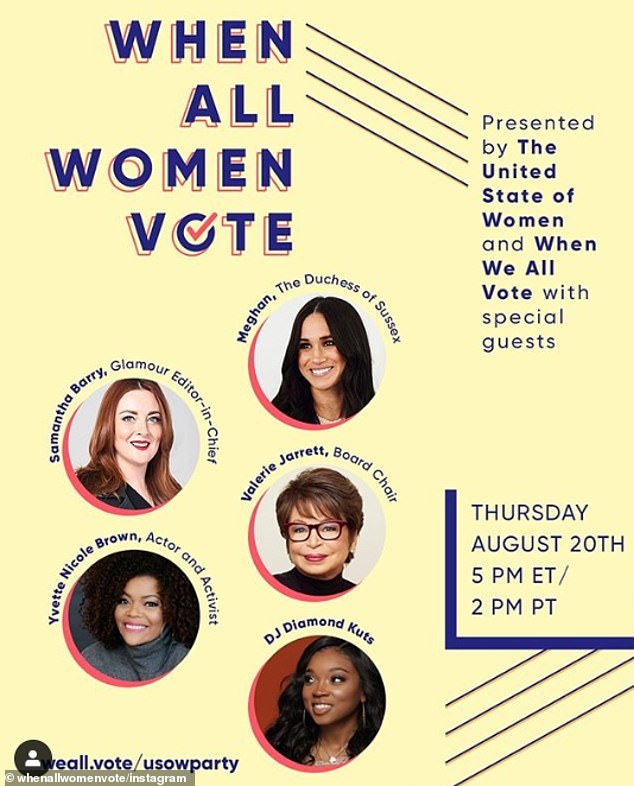 The Duchess will appear alongside several other special guests during the virtual summit tomorrow  (pictured, the poster shared online by the When All Women Vote initiative

‘Do not think your single vote does not matter much,’ the quote begins. ‘The rain that refreshes the parched ground is made up of single drops.’ 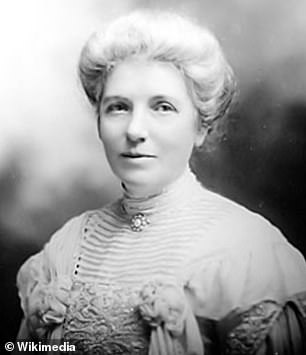 Poignant: ‘Do not think your single vote does not matter much,’ the quote from Sheppard (pictured) begins. ‘The rain that refreshes the parched ground is made up of single drops’

Meghan concluded: ‘That is why I vote.’

The former Suits star’s decision to speak out about her political plans marks yet another major break from royal tradition for Meghan; traditionally members of the monarchy are expected to remain politically neutral, and therefore do not speak out about their opinions in public.

However, Meghan confirming to the world that she will be voting in the presidential election will come as no surprise to those closest to her – particularly after it was revealed by a royal source in January that the Duchess of Sussex was aiming to become more ‘politically engaged’ after she and Prince Harry quit their roles as senior royals at the start of the year.

At the time, an insider told the Daily Mail that Meghan had grown ‘frustrated’ by the fact that she was not able to be actively involved in politics while she was a senior member of the monarchy, and that she wanted to ‘take advantage’ of the freedom to share her opinions with the world.

‘The Duchess is said to be frustrated that she was forced to stay out of politics after getting engaged to Harry,’ the source said.

‘She has strong political opinions and will now take advantage of the greater freedom she has to express them publicly.’ 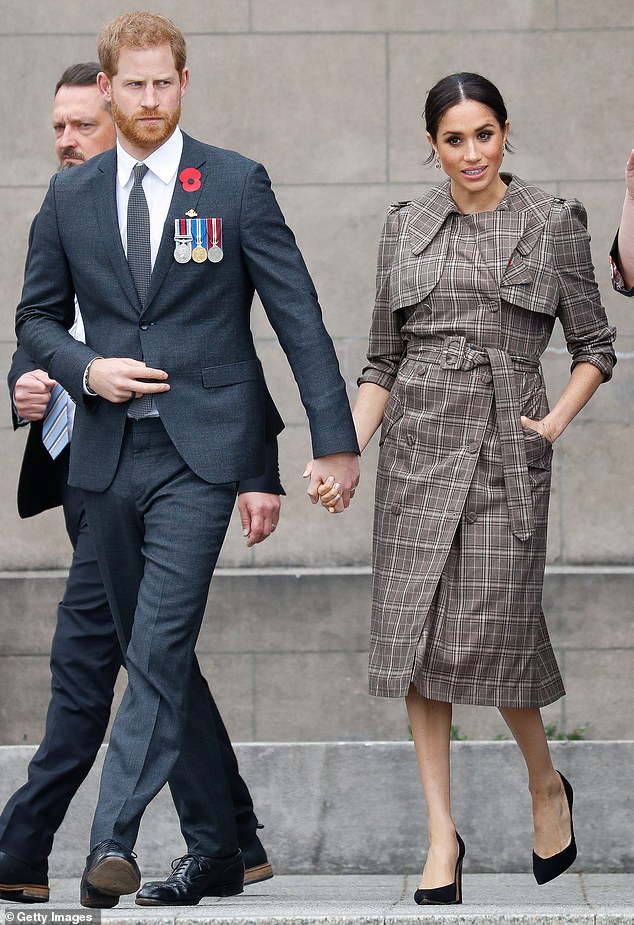 Inspiration: The 39-year-old shared a quote from New Zealand’s most famous suffragist Kate Sheppard, revealing that both she and her husband Prince Harry have ‘referred to it often’

Meghan did not reveal who she is planning to vote for the in the upcoming election – however, before marrying Prince Harry, she was incredibly outspoken about her dislike of President Donald Trump, branding him ‘misogynistic’ and ‘divisive’ during a talk appearance in 2016, shortly after he had won the election.

When Trump made an official state visit to the UK in June 2019, Meghan did not join the other royals in meeting him – a move that some royal sources claimed was her way of showing her disapproval of the President, although officially, her absence was blamed on the fact that she was still on maternity leave.

However, it was revealed in November 2019 that Meghan had invited Hillary Clinton to visit her and baby Archie at Frogmore Cottage – the family’s home in the UK – where the two women were said to have enjoyed a ‘very warm, sweet’ meeting. 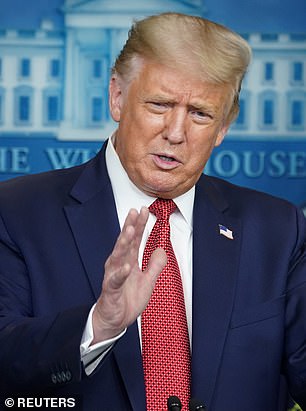 Criticism: Before marrying Harry, Meghan was outspoken about her dislike for President Donald Trump, branding him ‘misogynistic’ and ‘divisive’ in a 2016 interview after he won the election

Meghan’s new interview with Marie Claire is not the first time that she has spoken out about the importance of voting however; during an official visit to New Zealand with Prince Harry in 2018, the Duchess of Sussex marked the 125th anniversary of women getting the right to vote by once again quoting Sheppard during a speech at Government House.

‘The achievements of the women in New Zealand who campaigned for their right to vote, and were the first in the world to achieve it, are universally admired,’ Meghan said at the time, before going on to praise the country’s suffrage movement.

‘Women’s suffrage is not simply about the right to vote for women but also about what that represents: the basic and fundamental right of all people, including those members of society who have been marginalized, whether through reasons of race, gender, ethnicity or orientation, to be able to participate in the choices for their future and their community.’

Meghan then concluded her speech by sharing another quote from Sheppard: ‘All that separates, whether race, class, creed, or sex, is inhumane, and must be overcome.’

The Marie Claire interview is also not the first occasion that Meghan has shared her ‘favorite’ Sheppard quote.

In November 2018, during their official visit to New Zealand, the Duke and Duchess of Sussex shared the suffragist leader’s words on Kensington Palace’s official Instagram account, while posting an image of Meghan cradling her baby bump while surrounded by giant redwood trees in Rotorua.

Along with the quote from Sheppard, the couple thanked the people of New Zealand for a ‘wonderful’ visit.