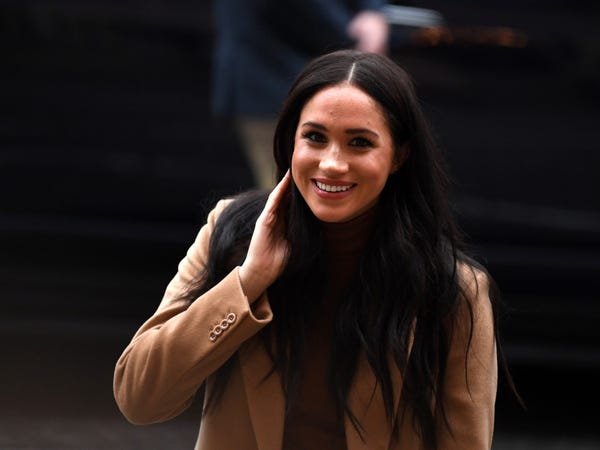 The Duchess of Sussex has been accused of copying ideas from the Netflix documentary "The Social Dilemma."

Speaking at Fortune's Most Powerful Women Next Gen Summit earlier this week, Meghan Markle made a comparison between social media and drug addiction by pointing out that the term "users" is used for both.

"I have a lot of concerns for people that have become obsessed with it," the duchess said about social media during the summit. "And it is so much a part of our daily culture for so many people that it's an addiction, like many others."

The Daily Mail  and The Sun were among the first publications to draw a connection between Markle's words and this quote shown in the Netflix documentary: "There are only two industries that call their customers 'users' — illegal drugs and software."

The quote is attributed in the documentary to Edward Tufte, a statistician and professor emeritus of political science, statistics, and computer science at Yale University.

"The Social Dilemma" also points out the way algorithms are designed to encourage addiction by personifying the concept. The documentary brings to life three characters who manipulate what the user sees to keep them on social media for a prolonged period of time.

"There is something algorithmically that is in there that is creating this obsession that I think is very unhealthy for a lot of people," Markle said of social-media software during the summit.

A synopsis provided by Netflix describes "TSD" as a "documentary-drama hybrid" that "explores the dangerous human impact of social networking, with tech experts sounding the alarm on their own creations."

However, calling social media and "addiction" is not new. While Markle's quote was similar to the wording used in the Netflix documentary, the concept of social media being addicting is something that has been around for far longer.

Prince Harry made a similar comparison during a mental health conference last year, saying: "Growing up in today's world, social media is more addictive than drugs and alcohol."

However, it's worth noting that experts in the field have disputed claims like these in the past.

While the duchess is yet to officially respond to the reports, a source close to Harry and Markle told Insider that the couple "have mentioned before that they are close with Tristan Harris," a computer scientist who appeared in the documentary.

During a video call with leaders in the Queen's Commonwealth Trust in August, Prince Harry responded to one of the participants mentioning Harris during the conversation.

"I love the fact you're quoting Brené Brown and also bringing up Tristan Harris because they are two people we absolutely adore as well," Harry said, according to Town and Country.

"We love them," Markle added.

Harris is due to appear alongside the Duke and Duchess of Sussex at the Time 100 Talks on Tuesday, a series of virtual conversations about the "state of our shared digital experience," according to a press release obtained by Insider.

The duke and duchess are cohosting the event.

Representatives for Netflix, Tristan Harris, and "The Social Dilemma" did not immediately respond to Insider's request for comment.