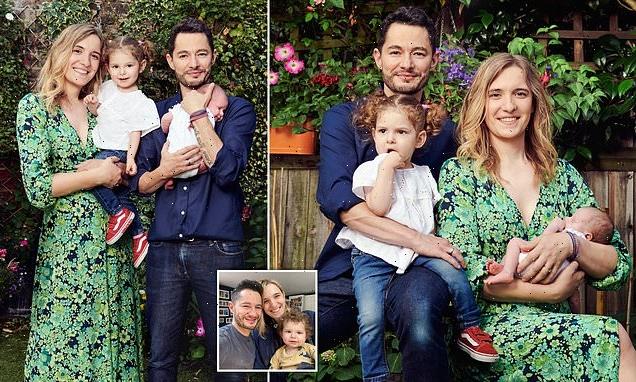 ‘We’d never choose for our kids to be trans because it’s a hard life’: Meet the mum and dad who’ve both swapped gender and just had their second child

Just two weeks after Jake and Hannah Graf welcomed their second child into the world — a sister for two-year-old Millie — they invite me to their home. Hannah, radiant but exhausted, bottle-feeds their newborn daughter as Millie totes her doll’s pram through the kitchen, pausing to stroke her sibling’s head and proclaim: ‘Baby!’

Toys are strewn randomly, there are bouquets, cards, packs of nappies, a crib with pink crocheted shawl; all the happy collateral of a new birth.

Presiding over the merry chaos is proud dad Jake, dispensing drinks and snacks and cajoling Millie to eat her fruit.

It’s the kind of domestic disorder that prevails in a million households up and down the land when a new sibling arrives, and two frazzled parents, immersed in the milky bliss of a newborn, are also juggling the demands of a toddler keen to make her presence felt. 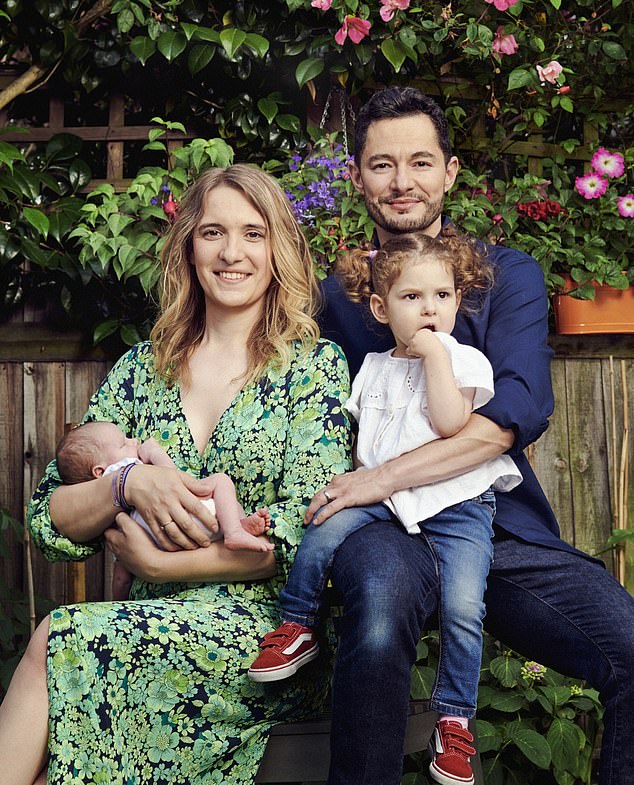 For actor, writer and film director Jake and his wife, Hannah, a former Army captain, the path to parenthood has been somewhat convoluted. The transgender couple have had two children by a surrogate, using eggs Jake harvested during a pause in his hormone therapy 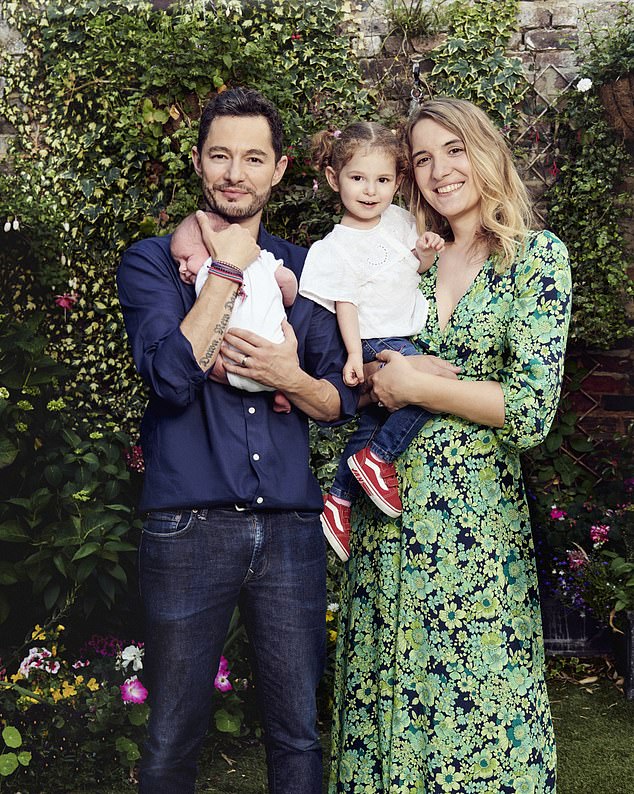 Hannah, who is more measured than her exuberant husband, said: ‘It’s hard to imagine I once doubted this life was possible. There are so many trans people who would love to have a relationship and family like ours. We’re really very lucky’

But for actor, writer and film director Jake and his wife, Hannah, a former Army captain, the path to parenthood has been somewhat convoluted. The transgender couple have had two children by a surrogate, using eggs Jake harvested during a pause in his hormone therapy.

He’d had them fertilised by donor sperm two years before he met Hannah, but by happy coincidence he’d chosen a donor who was just like his wife — ‘a tall, sporty, brown-eyed engineer’, to balance his own shorter stature and more arty aptitudes.

Today, the couple are mildly incredulous at the path their lives have taken.

‘A father of two! It’s more than I ever imagined,’ marvels Jake. ‘Just saying the words seems beyond my reality.’

Hannah, who is more measured than her exuberant husband, adds: ‘It’s hard to imagine I once doubted this life was possible. There are so many trans people who would love to have a relationship and family like ours. We’re really very lucky.

‘Our surrogate, Laura — who carried both girls for us — has given us the most amazing gifts and she did so entirely altruistically.’ 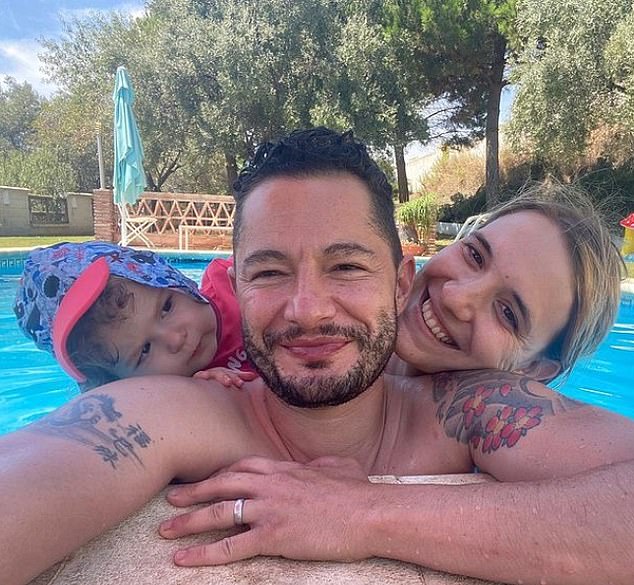 ‘A father of two! It’s more than I ever imagined,’ marvels Jake. ‘Just saying the words seems beyond my reality’

It was, in fact, Laura’s idea that she carry their second baby. ‘She called us and said: “I really loved the experience and I would happily do it again”,’ recalls Jake.

Laura, a single mum of two who lives in Ireland, has become part of their extended family. ‘We speak to her regularly and Millie calls her Auntie Laura, which is sweet.’

Indeed, when the family decamped to Ireland for the birth, Laura’s sister, Lynsey, looked after Millie while Hannah and Jake went to the hospital.

‘Laura asked us: “Do you want to be in the room for the birth?” We felt she should have privacy, but we stood right outside the door,’ says Hannah. ‘All went to plan and Jake was with me when I had my first skin-to-skin cuddle with Teddie.’

I have known Jake, 44, and Hannah, 35, for four years; followed the happy trajectory of their relationship from partners to husband and wife — they were married in 2018 — then proud parents to their first-born, and now as a family of four.

No one, you would imagine, could fail to wish them well: they are a loving, caring mum and dad, all the more devoted to their daughters because their path to parenthood was fraught with obstacles.

Yet today, more than at any time previously, they feel beleaguered. ‘Bigots say: “You shouldn’t have your kids around these people”, and a lot of hatred has been stoked up against our tiny community,’ says Jake. ‘But when people meet us, the myths are dispelled. 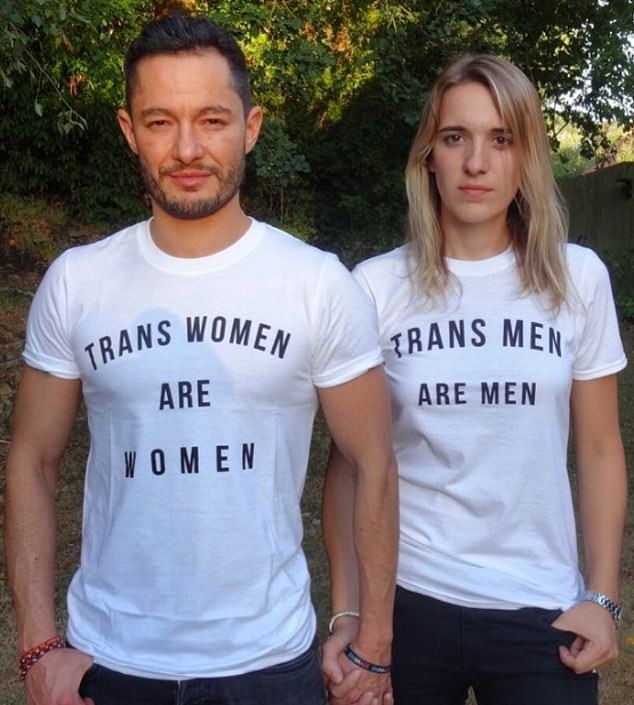 I have known Jake, 44, and Hannah, 35, for four years; followed the happy trajectory of their relationship from partners to husband and wife — they were married in 2018 — then proud parents to their first-born, and now as a family of four

‘We’re just normal — not the freaks and weirdos we’re made out to be. People make ill-informed judgments based on prejudices without even talking to us.’

They feel sharply aware of the need to protect their daughters from misapprehensions about the trans community — one of the more wildly fanciful among them that they will raise their children to be transgender, which, the Grafs point out, is no more possible than raising your child to be gay.

‘We know we have to respect our children’s individuality,’ says Jake. ‘But, honestly, we would never choose for them to be trans. It’s a very hard life. You face more hatred and prejudice and it’s vastly more complicated to have a family.

‘I think people expect us to have rainbow flags draped all over the house and to be bringing up the kids gender-neutral, which has never occurred to us. I love Millie in pink. She wears it all the time.

‘She’s just a child and she loves jumping, playing in the sandpit, picking flowers and painting. We haven’t pushed her in any direction. We’ll just support her in whatever she wants to do.’

The Grafs can now reflect on the subject of trans children from a parent’s perspective. In a debate that has become inflamed on both sides, they appeal for moderation, decency and an end to incendiary rhetoric — both from their detractors and the trans community.

‘There are angry people on both sides who say things that aren’t acceptable, and in the middle are open-minded people who want to find a way forward,’ says Hannah.

‘Do I think there are trans people who say silly things? Yes, I do. But there are many more who are anti-trans saying really horrible things. Let’s not focus on either, take the hate out of it and converse.’

The Grafs are educated, eminently reasonable people. They want to end the slanging match between so-called Terfs (trans-exclusionary radical feminists) and the trans community and its supporters. Hannah feels particularly vulnerable, caught in the crosswinds of the storm that has been whipped up around trans women in female spaces such as changing rooms, and in women’s sport and prisons.

She was the highest ranking transgender officer in the Army before she left three years ago, and now works in finance in the City.

She served her country with distinction for ten years, rising to the rank of captain before coming out as trans in 2013. Her fellow officers and soldiers supported her transition wholeheartedly, and she went on to win an MBE for her work with LGBT Army personnel.

Yet today she feels under siege. ‘All I’m asking for is dignity. I’m more fearful walking down Clapham High Street than I felt in Helmand Province (Afghanistan). I had my comrades there, while here, as a trans woman who’s been in the media, I don’t know whether I’d have support if I was attacked.’

Indeed, she feels so ill at ease in female-only spaces, one of the hottest areas of contention, that she was afraid to be in a women’s ward after Teddie’s birth. ‘It made perfect sense; babies are born and midwives check them out, and it’s natural they should be with their mums,’ she says. ‘But I was all too aware that there might be someone who thought I didn’t belong, as a trans woman, on a labour ward, and in the current culture might be emboldened to kick up a fuss.’

As it happened, Hannah was given a private room. But, says Jake, ‘I was dreading the possibility of her being alone and someone saying something upsetting.’

However, he concedes that ‘most people are kind, unfazed and absolutely accepting of our trans identity, and when she’s out and about most people just see a mother and child. No one has ever said anything in front of the kids’.

Millie, of course, is too young to understand the term ‘transgender’. ‘But we will explain it all to her when she is old enough,’ says Jake. ‘She will grow up understanding that there are all types of people in the world, and to show kindness to everyone, be they trans, black, gay, Christian, Muslim.’

Hannah, with her hand-span waist and long legs, is strikingly feminine, but her deep voice often marks her out as a trans woman.

The very fact she is a mother has inflamed the transphobes: the Grafs have endured death threats against their children, and been condemned for having them at all if they ‘couldn’t have them naturally’.

‘Which begs the question: Should no one have IVF?’ asks Jake.

However, Hannah has been embraced by everyone at Millie’s nursery. ‘They have always been kind and welcoming,’ she says. ‘It remains an angry and vocal minority who attack us.’

While Millie will be starting ballet and football classes in the next couple of weeks, Hannah regrets that even team sport at its most informal is now denied to her.

‘I’m not going to compete in the Olympics, I just want a kickaround on a Saturday morning,’ she says. ‘But I don’t engage any more — it’s too fraught with anxiety.’

Jake adds: ‘You feel doubly vulnerable when you have two small children.

‘I worry about Hannah — about someone abusing or hitting her. On the Tube people have stared at her and loudly announced: “That’s a transsexual.” And I’ll say: “That’s my wife you’re talking about.”

‘Although those instances are few and far between, it makes them all the more shocking and hurtful when they do occur.’

I wonder if they are worried about how their children will handle such situations in the future?

‘We cannot control others’ actions, nor what they choose to do in front of our children, but we remain hopeful that kindness will prevail,’ says Jake.

We sit in their garden, bright with lilies, roses and jasmine: mum, dad and two little daughters, oblivious to the furore that surrounds their parents, happy and secure in their love.

‘The vast majority of us are kind, decent people, and when isolated instances of inappropriate behaviour occur, they should not be considered as representative of an entire community,’ says Jake.

And, of course, the Grafs are kind and decent; a unique family distinguished not by the fact Jake and Hannah are transgender, but by their determination to raise their two small daughters in a home full of love.