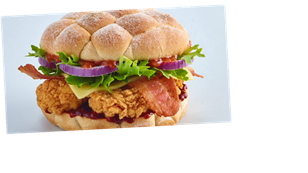 The food chain regularly updates its menu, (usually around the six week mark), with new products that are only around for a short time.

Eagle-eyed fans will already be aware from social media that the Cadbury Creme Egg McFlurry is making its comeback on the new menu just in time for Easter.

As well as the much loved ice cream option, there are other returning items worth getting excited about which will be available to buy from March 24 until May 5. The new items include:

Perhaps one of the showstoppers of the menu is the Chicken BBQ Smokehouse burger. It includes two succulent pieces of chicken with smoky BBQ sauce, cheddar cheese, smoke bacon rashers and various salad – all rolled into a soft, ciabatta-style bun

The Big Tasty is also one of the fan favourites to watch out for, made with 100% British and Irish beef, with melted cheese, tomatoes, lettuce, onions an of course the irresistible Big Tasty sauce. This Big Tasty will be available with or without bacon.

And it's good news for those who enjoy the cheesy mozzarella dippers treats, usually they would be removed from the menu in lieu of new items, but many McDonald's fans were outraged, calling for mozzarella dippers to become a permanent fixture on the menu.

One less than pleased Twitter user wrote to the food chain saying: “I’m going to annoy your Twitter until you keep mozzarella dippers on the menu or make the salsa dip an option all year round".

Luckily for us, mozarella dippers will indeed be staying on the menu, making the sixth item to return.

The introduction of new items means saying goodbye to some of the old favourites. It will be the last time fans will be able to order the likes of the Grand Big Mac with and without bacon, Homestyle crispy chicken, McFlurry Flake and McFlurry raspberry flake for a while.

This week the fast food chain also been confirmed that the popular McDonald’s Monopoly game will be going ahead this summer.

It was cancelled last year due to coronarvirus and whilst an exact launch date hasn’t been confirmed, McDonald’s fans are excited as ever.