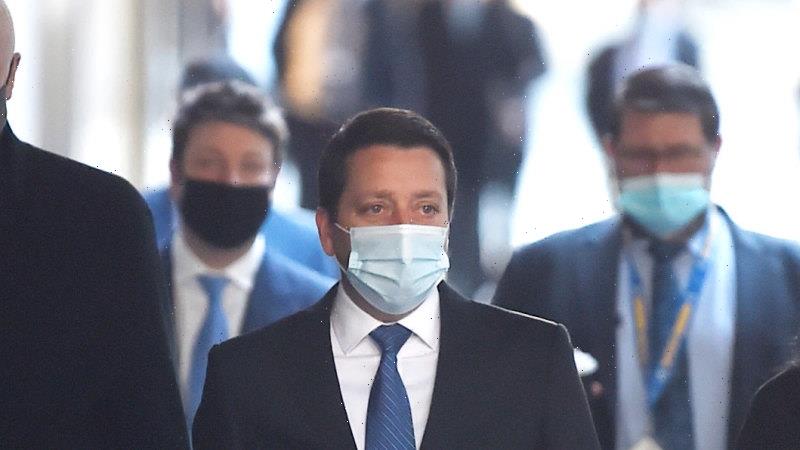 Former Victorian Opposition Leader Matthew Guy has been returned to the leadership of the Liberal Party after the incumbent, Michael O’Brien, decided not to contest a leadership ballot during a vote of MPs this morning.

A motion to spill the party’s leadership positions was put forward by Tim Smith, a supporter of Mr Guy, and carried 20 votes to 11. Mr O’Brien then decided not to contest the leadership ballot.

Member for Caulfield David Southwick was elected deputy leader. He defeated Opposition Treasury spokeswoman Louise Staley in the final round of voting.

Mr O’Brien arrived at the meeting of Liberal MPs at the party’s Collins Street headquarters at 7.15am ahead of a scheduled 7.45am start and declined to speak to waiting journalists. 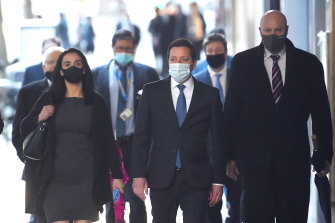 Matthew Guy arrives at a Liberal Party meeting flanked by his supporters.Credit:Justin McManus

Upper house MP Craig Ondarchie, a supporter of Matthew Guy, arrived shortly after and said it “was time for change”.

Mr Guy arrived with an entourage just before 7.30am, looking jubilant, but did not predict the outcome of the vote.

“Give us an hour or so and we’ll let you know,” Mr Guy said. 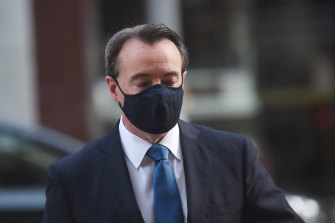 Michael O’Brien arrived early to the meeting that ended his run as Opposition Leader.Credit:The Age

Mr Guy and his backers moved against Mr O’Brien after months of speculation and discontent about his leadership, in which some colleagues derided his inability to “cut through” to the Victorian public and improve the party’s position against the Daniel Andrews-led Labor government.

Ryan Smith and David Southwick, who have been touted by colleagues as potential deputy leaders, arrived at the meeting together but did not comment to waiting media. The party’s current deputy, Cindy McLeish, did not say whether she would contest the deputy position.

Upper house leader David Davis declined to comment on the ballot and said the party needed to focus on providing good government for Victorians. Mr Davis is one of the key MPs who is expected to switch support away from Mr O’Brien.

Before the meeting, Mr Guy and his supporters believed about two thirds of the 31 MPs would vote for him. A Liberal source said Mr O’Brien had “more or less conceded” on Monday afternoon he would not remain leader, though he had not entirely given up hope.

Close supporters of Mr O’Brien had been urging him to quit in recent days, but he had been resisting the pressure and wanted to test his support in a party room meeting.

Several Liberal MPs told The Age they decided to vote against Mr O’Brien to end leadership tensions that have plagued the party for much of this term.

Mr Guy’s elevation to Opposition Leader comes less than three years after he led the party to a crushing defeat at the 2018 election, where the Coalition won just 27 seats in the lower house to Labor’s 55.

The Coalition has lagged in the polls since the 2018 defeat.

As leader, Mr Guy also faced criticism of rezoning decisions he made as planning minister and the infamous “lobster with a mobster” scandal sparked by his dining with an alleged mafia leader.

The Liberals have struggled to shift attract support during the pandemic, replicating a national trend where incumbent governments have been able to maintain their support.