The upper house has sat all night for a marathon debate into the Andrews government’s pandemic bill, continuing into dawn – more than 14 hours after it began in the Victorian Parliament.

Despite clinching a last-minute deal with Rod Barton of the Transport Matters Party, who pushed for significant concessions, a final vote still appeared distant by 5.30am on Wednesday when the upper house was still limping through only the 12th of all 58 clauses. 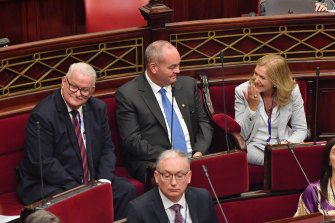 Debate on the Public Health and Wellbeing Amendment (Pandemic Management) Bill 2021 had started a day earlier, on Tuesday, at 3.05pm after the Opposition failed in its attempt to delay the draft legislation.

The bill is expected to pass with the support of four crossbench MPs — Mr Barton, Fiona Patten of the Reason Party, Animal Justice MP Andy Meddick and Greens leader Samantha Ratnam — before it returns to the lower house as a formality where Labor holds a commanding majority.

Under existing laws, which expire on December 15, the Chief Health Officer makes binding health orders under a state of emergency. The government bill transfers those powers to the premier and health minister of the day who are accountable to Parliament and the Victorian public.

There were fears the government would fail to secure an extra vote to pass the bill, which could have led to Victoria becoming the only jurisdiction in the country without powers to enforce health orders, including mandatory quarantine of COVID-19 cases and vaccine mandates, after the surprise re-emergence of ousted Labor minister Adem Somyurek who threatened to tip the vote against his former party.

Under the deal with Mr Barton — which the government hopes will quell public turmoil that has led to daily protests on the steps of the Victorian Parliament — a new independent panel would be established to review detention orders imposed during a pandemic.

A joint parliamentary committee, chaired by a non-government MP, would also be established to review public health orders, and aggravated offences would be erased in changes decried by the Opposition as “Mickey Mouse amendments”.

Legal and human rights groups broadly welcomed the concessions, but president of the Victorian Bar, Roisin Annesley, QC, and Paul Hayes, QC, one of the 60 barristers who signed an open letter opposing the government’s proposal in its original form, raised concerns it fell short on two significant fronts.

Ms Annesley and Mr Hayes separately said it should be judges and magistrates who routinely presided over hearings about the infringement of people’s civil liberties — not appeals officers — who reviewed detention orders.

The Human Rights Law Centre, Law Institute of Victoria and Centre for Public Integrity said the latest amendments made significant improvements and the bill, although imperfect, was worth supporting.

The Victorian Opposition had sought 18 amendments to the bill and has vowed to repeal it if elected next year, with leader Matthew Guy on Tuesday accusing the government of playing politics using “the politics of fear, the politics of division”.