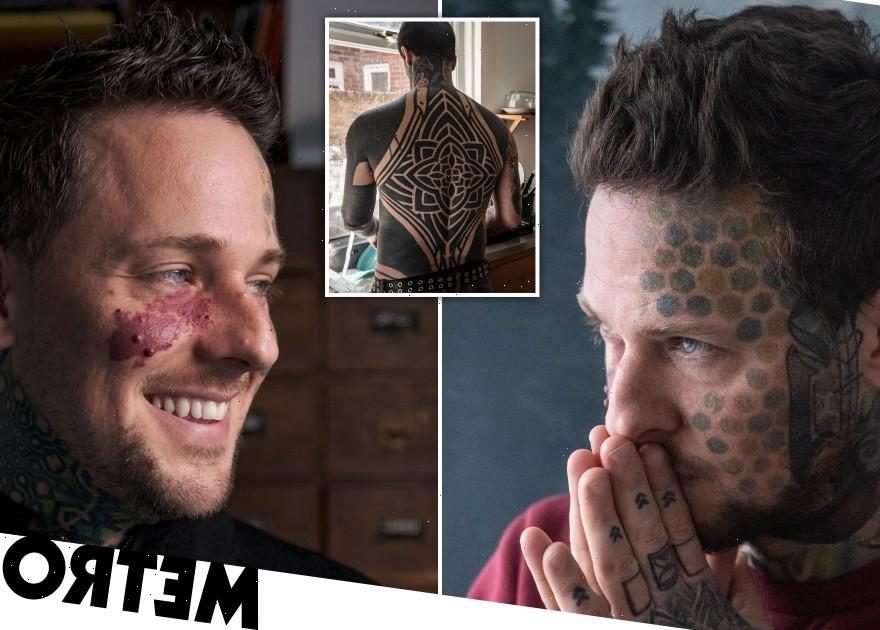 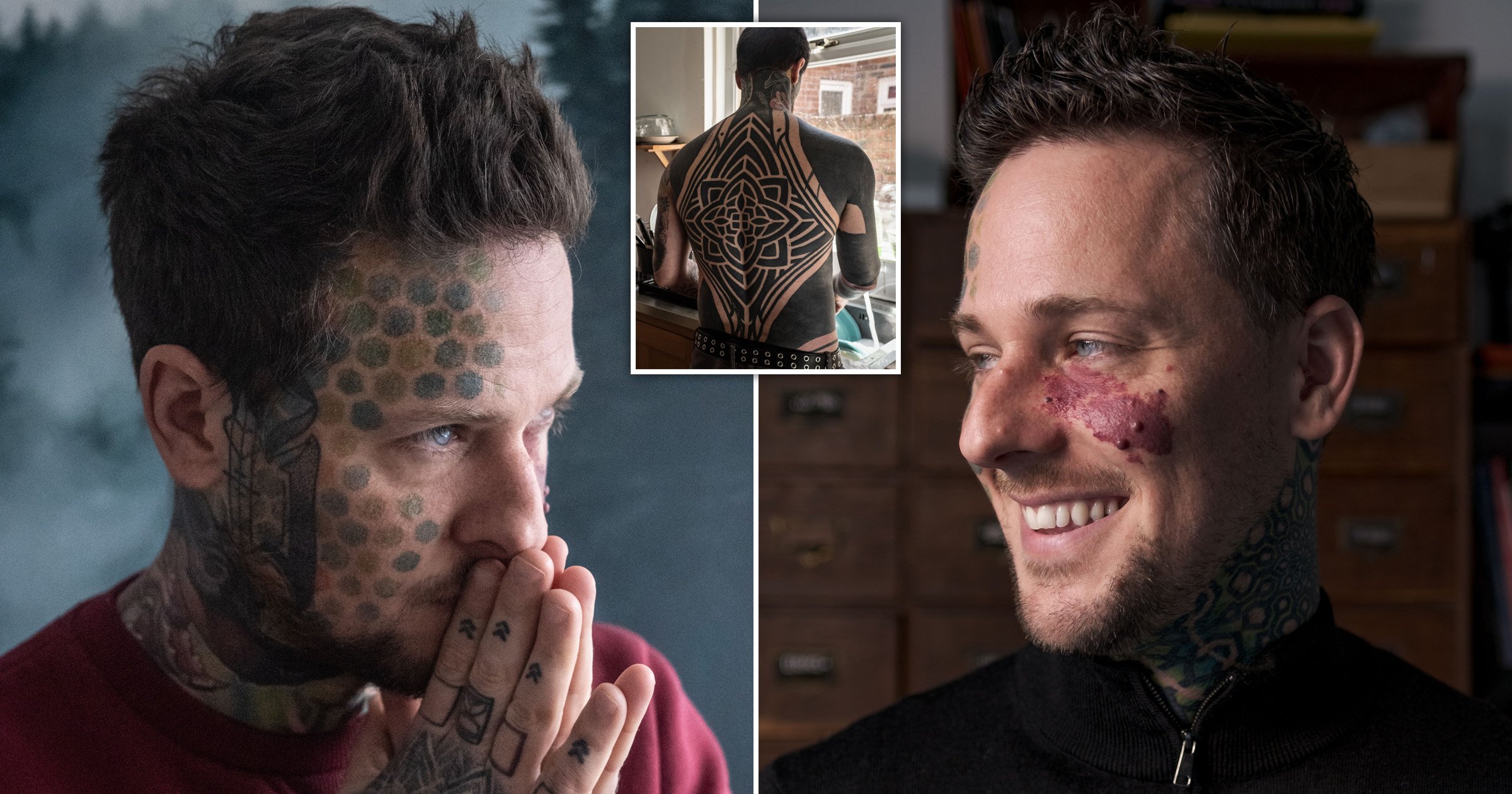 For years Heywood Taylor dealt with strangers looking at the birthmark on his left cheek – but now he has ‘taken control’ and given them something else to stare at.

The photographer and videographer, from Newcastle, UK, has spent £10,000 ($14,000) covering himself in tattoos, and gained heaps of confidence.

He said: ‘Initially, the tattoos were not something that I was consciously getting because of my birthmark in any way but once I started getting my hands and neck tattooed, there was a shift.

‘I was very aware that getting these tattoos had and still has great significance in society, and that the way people may look at me or judge me might change.

‘Fast forward to today and I have half my face tattooed, and I can safely say I have never felt more comfortable with the way I look.

‘I have definitely regained ownership of the way I appear and in part, I have taken control back over the stares I get in the street.’

He first noticed comments about the birthmark as a child, with other children asking if it was an injury.

‘People often mistook my birthmark for a bruise or a burn,’ said Heywood.

‘I remember people staring and often asking me if I was ok.

‘A couple of times I was told it was ugly and that I should get it removed, but at the time I didn’t pay it much notice.

‘I don’t remember too much anguish regarding having my birthmark though.

‘It wasn’t until my late teens and early twenties that I really began to struggle with having a birthmark.’

As he got older, he worried about looking different from his peers and struggled with his appearance.

‘I remember getting very paranoid when in public and uncomfortable, not because people would or had ever said anything, but simply because of people staring,’ he said.

‘I felt awkward as a teenager as many people do, so the added stares of the birthmark enhanced this awkward anxiety.

‘By my twenties, I developed agoraphobia – particularly of public busy places.

‘I would never be in public alone and if for example I had to travel, I would often feel very vulnerable within myself.

‘I could not stand people looking at me and then looking away awkwardly. It made me feel horrendous and I suffered from cold sweats.’

When he was 25, his mother passed away and he became depressed. This combined with his anxiety and struggles with alcohol led Heywood to contemplate suicide aged 26.

He turned to exercise to help and was soon in better shape. As his confidence grew, so did his desire to add body art.

Although already having one or two tattoos before this, in his mid-30s Heywood decided to get tattoos on his hands, neck and face and has felt increasingly confident about his appearance ever since. Now he has over 30 tattoos across his body.

‘I found myself overweight and miserable, contemplating the end so I joined a gym and it saved me at that time,’ he said.

‘I would gradually regain my self confidence and after a few years, I had learned to believe in myself again, and with a good boost of ego I grew in confidence.

‘It was at this point that I started really getting tattooed.

‘I had had a few tattoos before, but once I was getting in better shape and my confidence grew, I actually felt more comfortable to start getting tattooed more.

‘As the skin got gradually covered in permanent ink, I found my confidence grew even further.’

Although the 36-year-old still receives plenty of stares from strangers, he says that by covering such visible parts of his body in artwork, he has managed to ‘take back control.’

Heywood hopes that sharing his story will help normalise facial differences and make them less taboo.

He said: ‘Facial difference awareness is important to me because I think the more people see and learn and experience other stories, the less taboo people with facial differences become.

‘I am quite privileged in this regard that my birthmark is comparatively small.

‘Many people have much greater facial differences than me, and I know first hand from speaking with them that they have experiences that are far darker and harder to digest.

‘Nevertheless, everyone’s story is valid and so I feel my ten or so years of struggle with my birthmark is still worth sharing.’

Heywood now sees his birthmark as key in shaping the person he has become.

‘To those who are self-conscious about their birthmark, it can really suck and the mental health implications are real,’ said Heywood.

‘The only thing that has changed for me with my relationship with my birthmark is that I am no longer anxious about it and that’s because I worked on myself.

‘I love the little red thing, and I’m grateful for it because it has shaped me in far more positive ways than negative.

‘As people, we are all much much more than just a face – just some of our faces are a little less boring than the norm.’