A man has become an internet sensations after getting hundreds of celebrity signatures tattooed on his back — including Will Smith, Chris Rock and even the man who voices SpongeBob SquarePants.

Instagramer Funky Matas, 31, from Miami, Florida, has 225 tattoos on his back that consist of the signatures of the people he has met throughout his life.

Funky broke a ‘RecordSetter’ world record in 2017 with 190 tattoos signatures on his back and is currently waiting to be verified by the Guinness World Records. 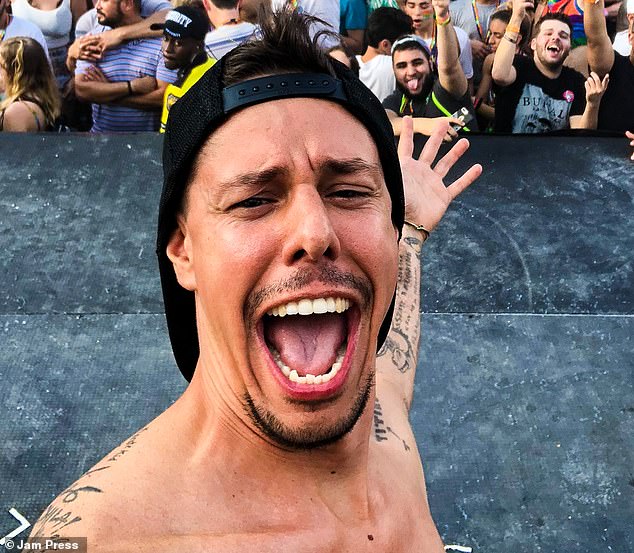 Making a name: Instagramer Funky Matas, real name Jorge Matas, became an internet sensation with his 225 tattoo signatures on his back 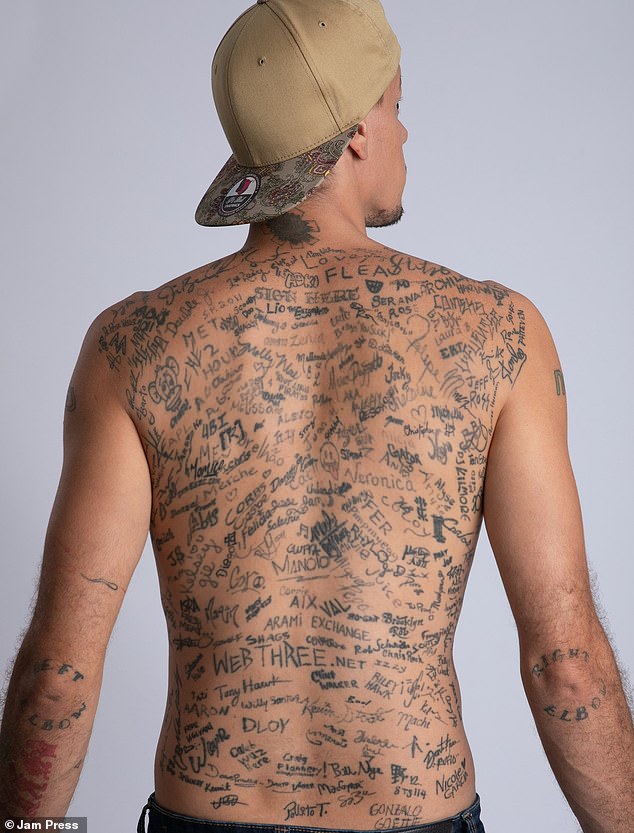 His canvas: The signatures include ones from Will Smith, Chris Rock and Gerald Butler 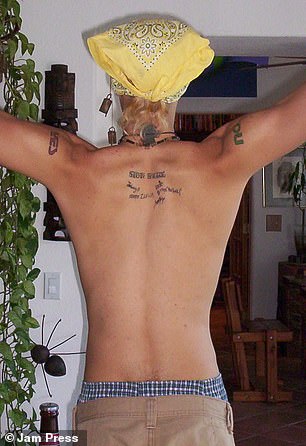 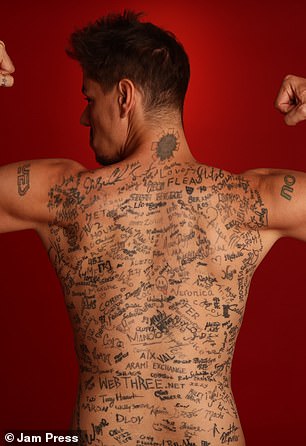 Then and now: The man originally came up with the idea because he thought it would be fun for his friends to sign his back with sharpie. Pictured left is before all the signatures 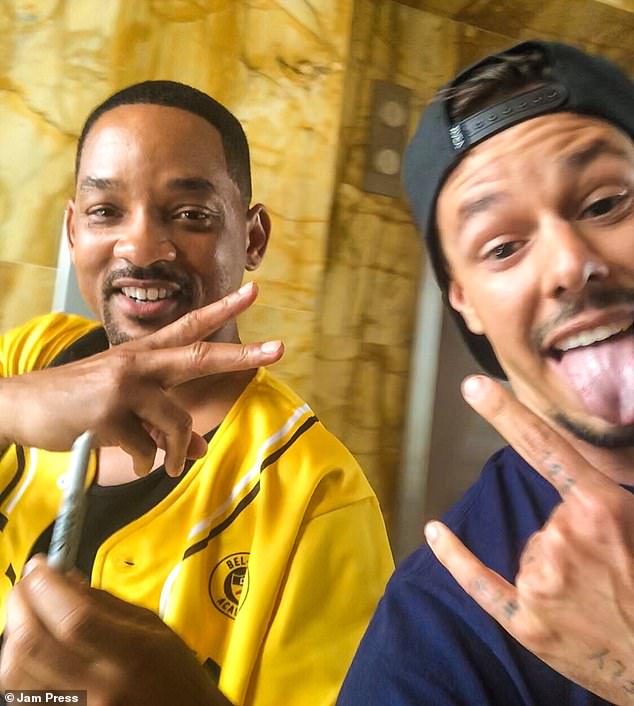 Fresh prince of ink! One of the celebrities Funky got to sign his back was Will Smith

The tattoo artist and entertainer, whose real name is Jorge Matas, was born in Caracas, Venezuela and spoke about how the idea first came about for tattooing his back. 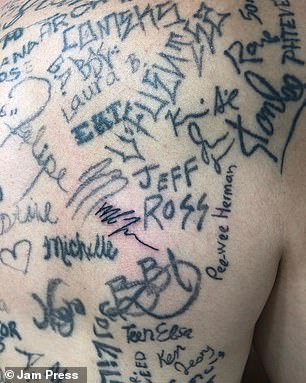 Proud: ‘Before anyone tattoos me, we usually talk about what is going to be done, but I have had to decline a few important people who wanted to sign my back,’ Funky said

‘I was in between these two ideas: a survey like the ones MySpace had with questions and the answer parts in blank so people could personally fill them out with a sharpie or having my friends sign my back with an actual tattoo machine,’ he said.

‘I thought the second idea was more interesting and more fun,’ Funky continued, adding: ‘Since I am a tattoo artist, it wouldn’t be too difficult to set these occasions up.

‘As far as anyone trying to talk me out of it, most people already knew my wild lifestyle and the fact that I never let anything stand in my way. So nobody really tried to prevent anything from happening. I’m pretty hard headed when it comes to things I want.’

A wide range of celebrities — including Will Smith, Chris Rock, Mike Tyson, Usain Bolt, Tara Reid, Gerard Butler and the man who voices of SpongeBob Squarepants — have contributed to making Funky the most signed person in the world.

Some of the stars have even tattooed Funky’s back with their own hands.

‘Before anyone tattoos me, we usually talk about what is going to be done, but I have had to decline a few important people who wanted to sign my back,’ Funky said.

People have also turned down Funky for having their name tattooed on his back.

‘A few people have turned me down because it probably wasn’t the right time, etc,’ he said. ‘The man who played Chewbacca in the original Star Wars movies was very hesitant because he was afraid of how it would turn out.’

Funky has 225 names tattooed on his back and said he thought hard about who he wanted to sign the area.

‘If you signed my back it’s because you inspired me in a way or we lived a cool moment together,’ Funky said. ‘Those moments are forever engraved in my head and I will never regret a signature even if that person and I stopped talking.’

Funky’s love of ink started at an early age when he and his friends used to practice on pig skin.

‘The first tattoo I ever did was at 14 years old,’ he said. ‘My friend and I built a tattoo machine out of a can opener motor, a guitar string and a pen case.

He continued: ‘I am also a graphic designer. I work a lot in Photoshop superimposing pictures and whatnot.’ 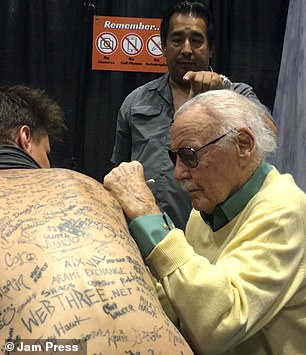 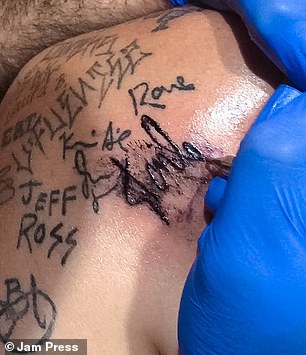 Incredible: Funky now has 225 signatures, including one from Stan Lee (pictured), on his back and thinks he can fit a total of 300 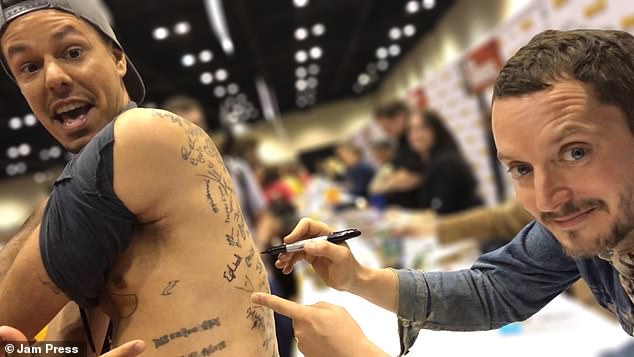 Chosen one: The man will specifically seek out specific celebrities to sign his back, including actor Elijah Wood 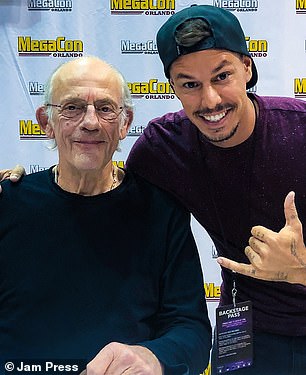 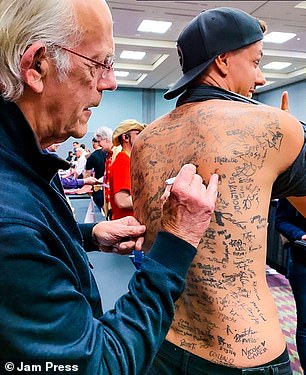 Embracing the ink: Another man who signed his back was Christopher Lloyd, who played Doc in the Back to the Future movie series 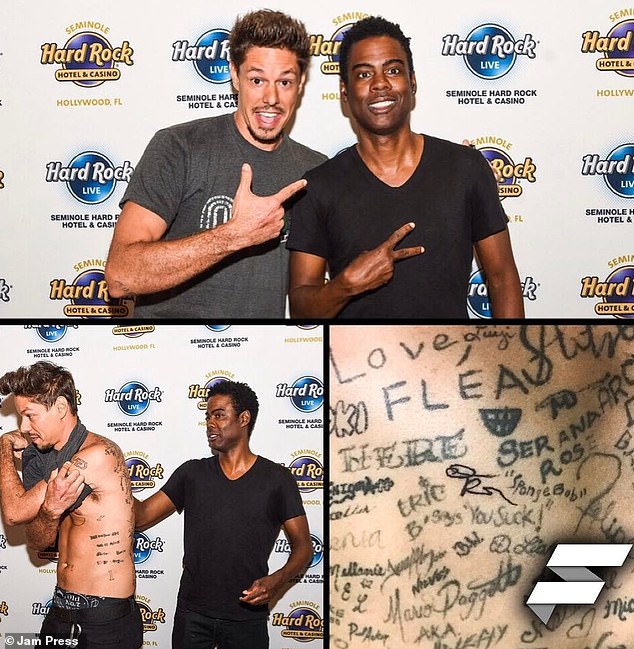 Happy: ‘Those moments are forever engraved in my head and I will never regret a signature even if that person and I stopped talking,’ Funky (pictured with Chris Rock) said 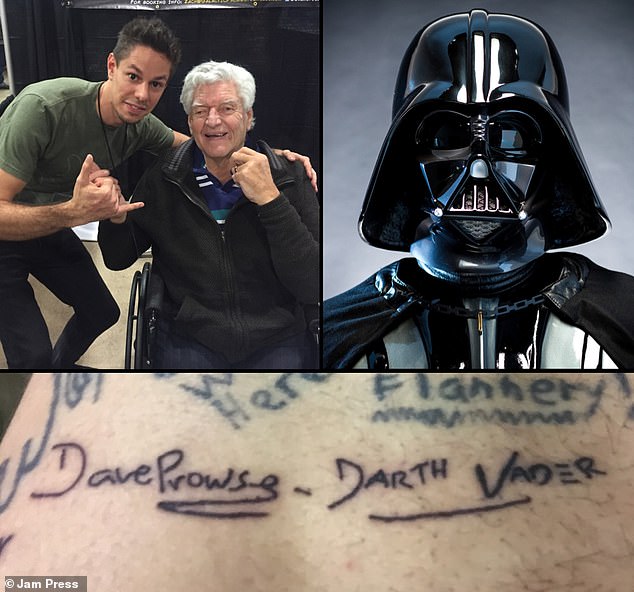 The force is strong! Another celebrity who signed his back was David Prowse, the body of Darth Vader 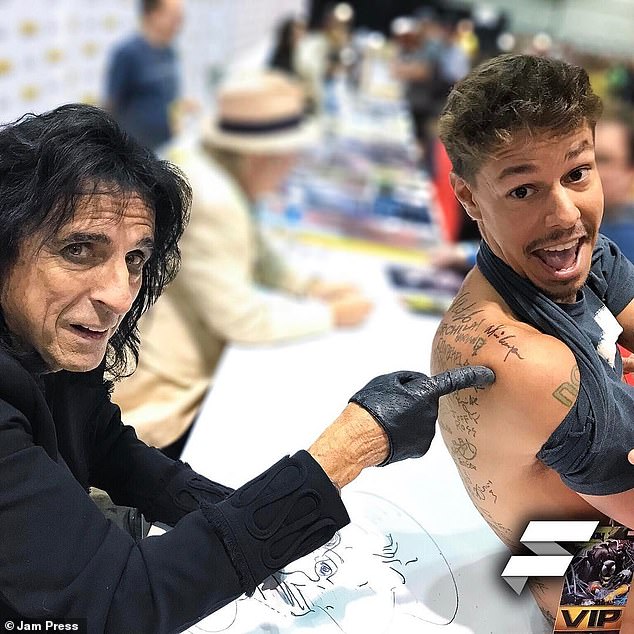 Ready for more: Other celebrities Funky wants on his back include Jim Carrey and Ellen DeGeneres. Pictured is Funky with Alice Cooper

His father was also artistic and spurred him on to do something creative with his life, Funky also works as a graphic designer.

‘I grew up with a very artistic father,’ Funky said. ‘He is a graphic designer, painter and also sculpture maker. I was in art classes from a very young age.’

There are still a number of people Funky hopes will eventually sign his back so he can then turn that signature into a tattoo.

‘I would love to meet and share some time with Jim Carrey, Russel Brand and Ellen DeGeneres. Those are just three off of the top of my head,’ he said.

The ink fan estimates that he still has space to make the signature count up to 300.

Funky’s back is not the only area of the man’s body that has been touched with ink. He claims to have a tattoo on his penis.

‘I’ve gotten a lot of tattoos. Even on my privates,’ he revealed. ‘Remember the movie Mary Poppins? Remember the word “Supercalifragilisticexpialidocious”? Well I changed it up a little and got “SupercaliFUNKYLICIOUSexpialidocious.”‘

Considering his claim, the most painful area he has been tattooed might surprise you.

‘The most painful tattoo I’ve ever gotten by far…the ribs. I felt like I got vertigo throughout the process.’

All this time spent being inked you can expect Funky to find himself in some strange situations, but he has always found himself in his comfort zone.

‘I don’t think I’ve ever had an awkward tattoo moment,’ he said. ‘The tattoo community is pretty wild. One time I was getting tattooed next to a girl that was getting her a**hole tattooed. Literally. She was getting her ex’s name covered up which is even crazier. Interesting situation.’