The business plans of disgraced politician Daryl Maguire are in ruins, with one prospective partner recently found dead in a swimming pool, while another is in debt to Chinese business figures featured in a corruption inquiry.

The current corruption inquiry into Mr Maguire has heard the former Wagga Wagga MP misused his parliamentary position to enrich himself by advancing the business interests of a number of Chinese-born associates, one of whom is Jimmy Liu, also known as Jimmy Yang. 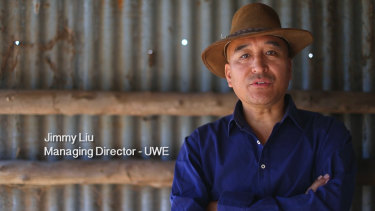 Daryl Maguire hoped to go into business with his long-term associate Jimmy Liu once he left politics.

The Independent Commission Against Corruption has heard Mr Maguire planned to join Mr Liu's business when he retired from politics in 2019 and at the same time the Liberal MP wanted to make public his personal relationship with NSW Premier Gladys Berejiklian.

However, Mr Liu's business has since unravelled spectacularly, as has Mr Maguire's reported five-year romance with the Premier. Asked by counsel assisting the inquiry this week if he was still in a relationship with Ms Berejiklian, Mr Maguire quipped, "Not after this I wouldn't be."

The Shanghai-born Mr Liu, 63, recently gave evidence to the ICAC that his agri-business company United World Enterprises (UWE) paid for Mr Maguire to travel to China. He also wrote a $1400 cheque for Mr Maguire that the MP used to pay off his credit card. 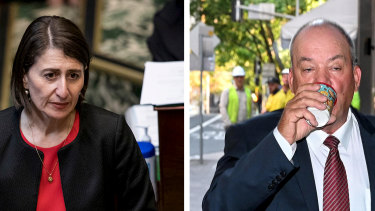 The inquiry also heard that in August 2017 Mr Maguire used government letterhead to write a threatening letter to a senior communist party official who was heading up Bright Food, one of the largest Chinese government-owned agricultural companies and the majority owner of Mr Liu's hay exporting company.

Mr Maguire said in his letter the company's action was causing "loss of face by my political leaders", which might lead to "very serious questions by our government about future ventures" with China.

Giving evidence on Monday, the Premier audibly gasped as she read the letter, saying it was a "shocking thing to write" and "highly inappropriate".

Mr Maguire was heard on phone tapes talking to Ms Berejiklian about UWE but the Premier claimed she knew nothing about the company. "If I understood that anything wrong was going to take place, of course I would have taken action but can I make clear I had no idea what UWE meant," she told the inquiry.

Several of UWE's subsidiaries – including the hay exporting venture that Mr Maguire had championed and Currabubula Station near Tamworth, which was to export beef – went into receivership in 2018 owing millions of dollars to creditors, including a number of angry farmers. 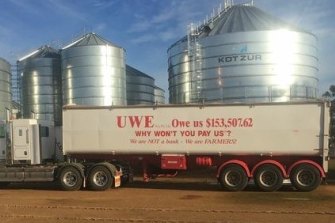 Cherilyn Bird is one of the many angry farmers owed money by Jimmy Liu’s company.

Cherilyn Bird, a farmer from Rennie, near Albury, had a sign painted on a truck that outlined the $153,507 UWE owed for hay. "Why won't you pay us? We are NOT a bank. We are FARMERS!" it read.

Mr Liu and his wife Freda Feng are being sued in the NSW Supreme court over $1.53 million from Cooma businessman Alan Du, which the couple are claiming was an investment rather than a loan.

There are five separate caveats registered on the title to Mr Liu and Ms Feng's Blakehurst house, which reflect loans done with a number of Chinese business figures.

One caveator is Peter Chen, also known as Chan, who is owed $1.3 million. Mr Chen, who has been a senior member of a Chinese Communist Party lobbying group in Sydney, was also a former business partner of billionaire property developer Huang Xiangmo, who Australian security agencies have banned from entering the country.

Mr Huang was alleged to have given $100,000 in cash in an Aldi shopping bag to a Labor party official, an ICAC inquiry heard last year.

Wu International has a caveat protecting a $2.6 million loan to Mr Liu and his wife. The company's boss Alex Wood, also known as Wu, is a property developer and an associate of former NSW Labor MP Ernest Wong.

The Herald has obtained a letter sent to the Australian Tax Office in October 2019 that refers to allegations the couple ran a "black business", which included not paying proper tax to the ATO.

"Be careful," warned the whistleblower. Attached to the lengthy letter was a USB drive containing details of allegations including fraudulent invoicing.

Mr Maguire admitted to ICAC on Friday that he received tens of thousands of dollars in cash, some of it delivered to him in Parliament House, in what ICAC has described as an illegitimate cash-for-visas scheme. He did not declare that money.

Mr Maguire was also believed to be pursuing business interests with his long-term associate Humphrey Xu, who paid for the politician to visit China for 11 days in 2002.

Mr Xu, who was found dead in the swimming pool at Fitness First in Sylvania at the end of June, was the businessman who was allegedly pressured by Chinese intelligence agencies to cultivate senior Labor MPs.

When Mr Maguire was first exposed in 2018 over allegations he was trying to collect commissions from Chinese property developer Country Garden, Labor demanded the ICAC also look at his involvement with Mr Xu, who had attempted to establish a $400 million trade centre in Wagga Wagga.

Mr Wu's business partner in the venture was the Chinese state-owned company Wuai. Although Wagga Wagga City Council approved the sale of land to Mr Xu's company ACA Capital in October 2013, the deal collapsed, with a council report citing community concern over "lack of transparency".