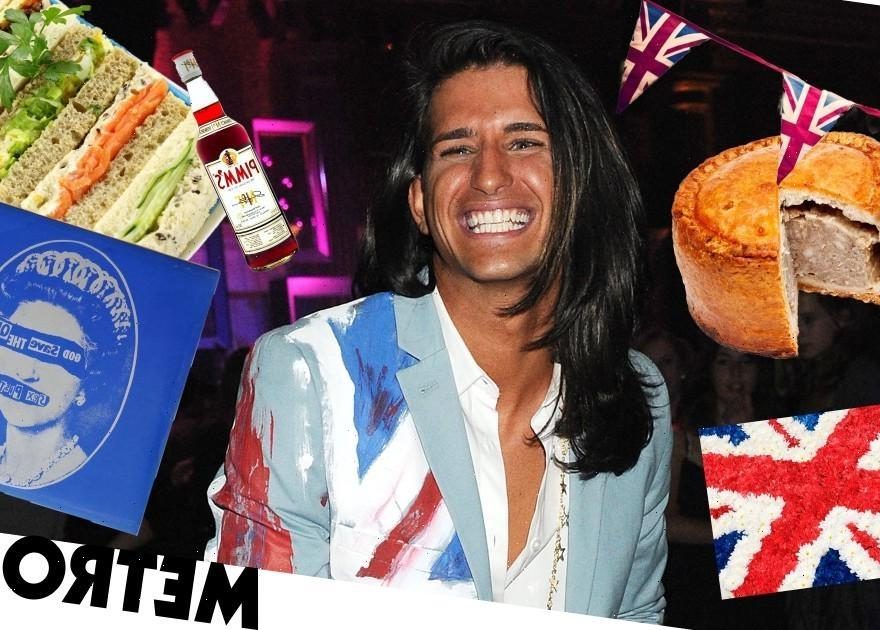 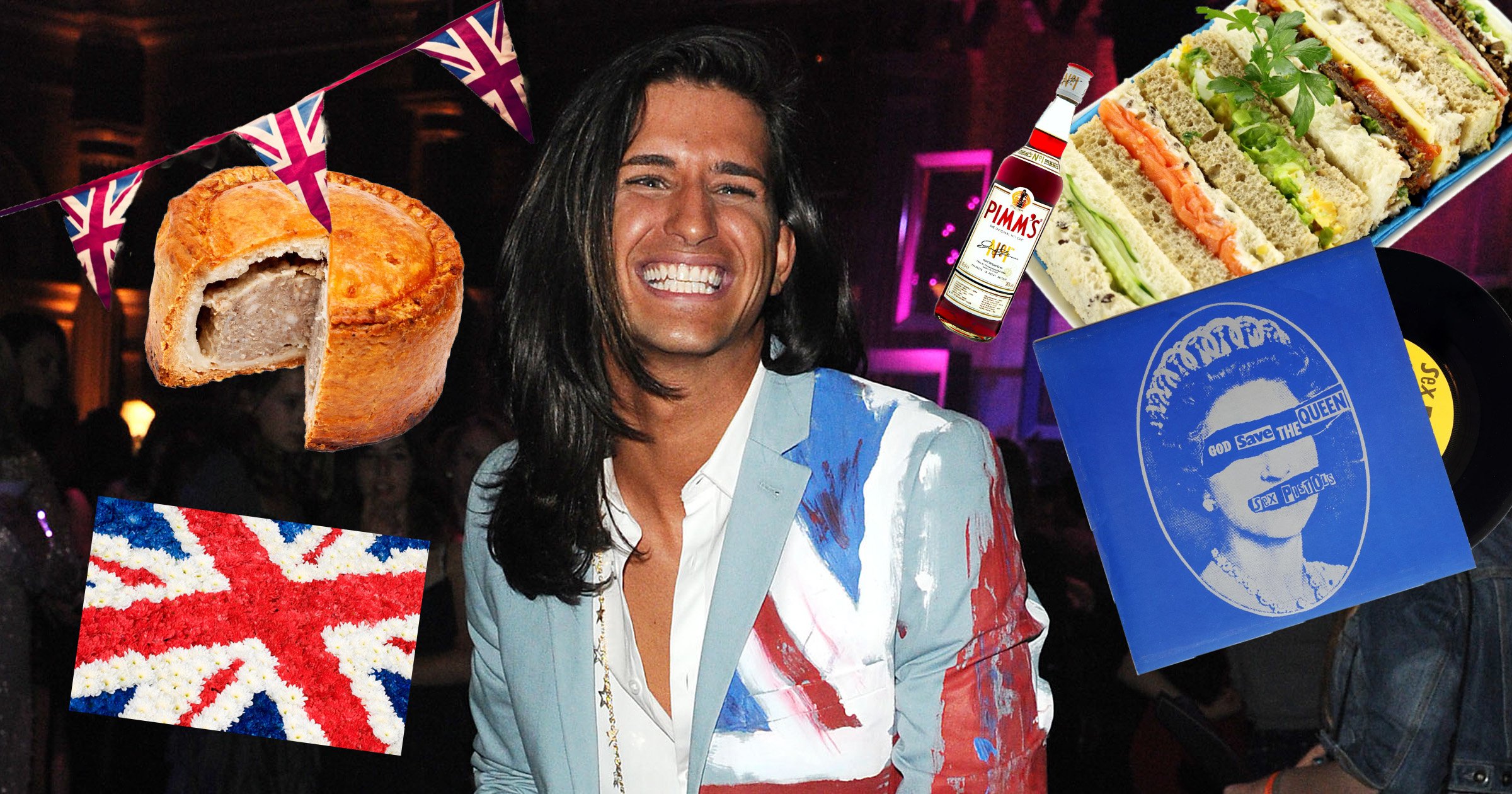 Reality TV star and royal superfan Ollie Locke has been at the forefront of the last two of the Queen’s jubilees. At her Golden Jubilee, marking 50 years on the throne, he was performing in a musical parade on The Mall.

For her Diamond celebration ten years later, he was invited to lunch in Buckingham Palace gardens.

‘Then I watched the concert sitting five rows down from the Queen,’ says Ollie. ‘I’m a huge royalist and that was one of my fondest memories ever – it was so wonderfully special.’

So Ollie is gutted that he won’t get to attend this year’s four-day extravaganza to mark the Queen’s remarkable 70-year reign, as he’s currently in Majorca filming the next series of Made In Chelsea.

But the posh party boy has no intentions of missing out – he and husband Gareth are planning to throw a bash on the Balearic isle for their well-heeled chums and co-stars from the show.

Ollie says: ‘I firmly believe the Queen is the backbone of the country, and almost everyone alive now has only seen her as the head of state.

‘She is very much Britain’s grandmother and this will possibly be her last jubilee so we need to make it go with a bang!’ Ollie is also firm friends with Princesses Beatrice and Eugenie. ‘I actually taught Princess Eugenie how to curl her eyelashes, while outside a nightclub in Chelsea!’ he laughs.

‘She didn’t believe mine were real, so I showed her my curling tricks.’

Here, the prolific host shares his tips for the perfect garden party…

The key to hosting a successful party is your guests, says Ollie. ‘You need a mix of fabulous friends and family who love celebrating as much as you do.

Send invites out via Paperless Post – then everyone can get excited by who else is on the guest list. Dress code: to the max!

‘This is a one-off event that will create memories – and great Instagram posts – so get those expensive shoes out of their box and don that fancy frock or suit you always feel your best in.

‘I would wear my Union Jack jacket but my house was burgled and that was the only thing that was nicked! Don’t forget to invite the neighbours so they can’t complain if the celebrations go on after dark.’

Nothing says summer in the UK like the smell of freshly cut grass to set the scene of a British daytime soirée. ‘Mow the lawn in the morning before your guests arrive. When dressing the garden, make bunting with the kids – it’s a wonderful nod to a bygone British era when the Queen first came to the throne.

Lots of tea lights and candles will give off a glorious glow when the sun goes down. Solar-powered fairylights are sustainable and will add to the magical atmosphere.

Get the fire-pit set up and ready to light to ensure the party stays outside when it gets chilly.

Have a pile of blankets and umbrellas at the ready – it wouldn’t be a British summer without the chance of rain, and if it does, smile, get wet and drink though it!’

Presentation is everything and the table is the star of the show at a garden party.

‘Don’t be afraid to go all out on the patriotism – this is a big deal in the UK. Deck your table in a red, white and blue colour scheme, have Union Jack napkins – you could even use a Union flag as a table cloth or runner to make your table sing the
National Anthem.

‘I love wild flowers as they serve such an English countryside feel. Present them in old jam jars on the table – a walk in the woods will find some lovely wild flowers or foliage and will save a fortune at the florists.

‘Don’t use throwaway cutlery, plastic glasses, plastic or paper plates as not only is that bad for the environment, they look cheap and spoil the taste of the food. Use your best crockery and glassware to style your table and showcase your delicious food.’

‘There’s nothing like a Pimm’s to get a garden party started. Prep in jugs or bowls so after the first glass, your guests can help themselves. The trick to perfect Pimm’s is to double up on the measures; two shots per glass, a slug of gin and diet lemonade so it’s not too sweet. Forget cocktails – they will take up too much time.

‘The Queen loves her gin and there’s nothing quite like a simple gin and tonic in between the showers of rain or the glorious sunshine. Don’t forget champers for the toast – no need to splash out £40 a bottle when you can get good bubbles at Lidl or Aldi for a tenner.

‘Keeps all the drinks chilled in a traditional wheelbarrow filled with ice. Assign roles to the teenagers to help serve food and drinks so you can relax with a glass of something bubbly!’

With Ollie’s highbrow background, it may come as a surprise to know that his favourite party food is ham and Philadelphia cheese swirls. ‘My husband Gareth says they’re naff, but my sister and I think they are beyond delicious.

‘If everyone is bringing a dish – less hassle and more economical in the current climate – then start a WhatsApp group so guests don’t double up. They’ll take the dish home, too, so less washing up for you! If you prefer a hot meal, a hog roast is an impressive way to feed a crowd at a garden party, but don’t forget your veggie guests!’

‘Celebrate great British bands and music through the decades – think The Beatles (left), Rolling Stones (below left), Madness, Queen – and fill your playlist with fun anthems to get your guests dancing. Don’t forget to add Jerusalem as everyone will join in at the top of their voices after a few drinks.

And it wouldn’t be a royal celebration without God Save The Queen – whether you prefer the National Anthem or The Sex Pistols version!

Ollie says: ‘Leave clearing up until the next day, darlings – there’s fun to be had and the mess is tomorrow’s problem!’

Ollie has partnered with Tyrrells Crisps to re-launch their limited-edition Coronation chicken crisps for the Platinum Jubilee.