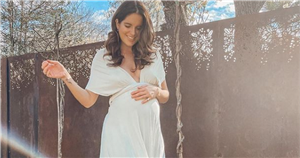 Former Made In Chelsea star Binky Felstead has been making the most of the gorgeous sunshine, by posing up a storm in her lovely London garden.

The pregnant media personality, 30, took to Instagram on Wednesday to share a series of stunning snaps of herself wearing a long flowing white dress, as she cradled her baby bump.

Binky lives at her London pad with her fiance Max Darnton and her three-year-old daughter India, who she shares with ex boyfriend and former co-star JP Patterson.

In the background of the new shots, we are given a sneak peek at her enviable outdoor space. We can see that the star has fake grass in lieu of a lawn.

This is preferable in smaller city gardens, as real grass has a tendency to get trampled, and requires a lot of upkeep to stay green.

The brunette beauty also has a stone border to the astroturf, and then built up flowerbeds, with green plants sprouting from the soil.

Are you part of The OK! VIP Club? If not, why not? It’s free and gives you backstage access to stories like this, exclusive home tours, special discounts and so much more!

However, perhaps the most unique aspect of the garden, is the bronze-coloured metal fencing, which has intricate designs carved at the top which serve to scatter the light.

There are also twisting thin trees, which look fantastic.

Binky, who has a three-year-old daughter called India with ex boyfriend and former co-star JP Patterson, must have been very thankful of this space during the multiple lockdowns we have all endured.

The star was recently asked is she has chosen a name for her unborn child.

During an Instagram Q+A, Binky, explained: “Yes we know the name. It took a few weeks, obviously it’s still really early but we’re pretty dead set on a name now.”

Opening up about how her second pregnancy has been different, Binky said: “First trimester with this pregnancy was a little bit more hardcore I didn’t really feel sick or tired with India, I guess I was a bit younger and I didn’t have a toddler already but I’ve definitely felt more sick this pregnancy than last.”

“I think you’re always going to be a bit anxious being pregnant and of course after a miscarriage there is that extra element of being anxious, especially going to scans,” she said.

“But you’ve just got to have faith and trust that everything is going to be good.”

The new-mum-to-be announced she is having a boy in sweet gender reveal video in January.