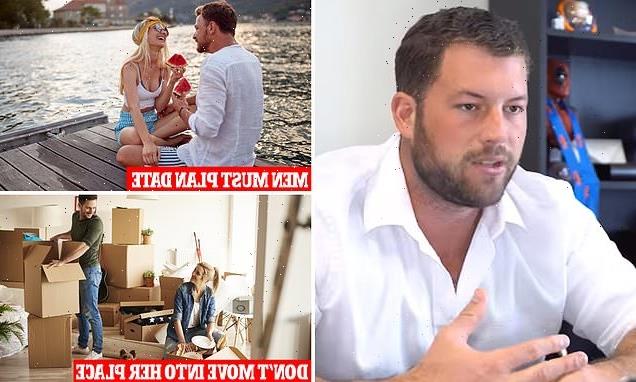 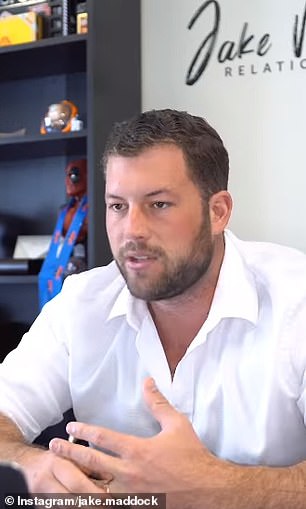 Men should plan and pay for every date, and never move into a woman’s home according to Australia’s self-described ‘tough love dating coach’.

Jake Maddock believes he has cracked the code when it comes to finding and building a ten out of ten relationship after struggling for years to get it right.

And it all starts with men and women slotting into their masculine and feminine roles, he claims.

Speaking to FEMAIL the popular relationship coach revealed learning how to navigate a relationship efficiently has been the greatest accomplishment of his life.

‘There was a good ten-year period in my life that was pure hell because I didn’t understand relationships at all,’ he said.

‘So, I decided to learn about and become a master at them. After years of studying under mentors and reading books and putting information into practice, I achieved a 10/10 relationship,’ he added.

Jake believes men struggle in relationships because they ‘aren’t good at verbalising their wants and needs, or even understanding them’.

‘The greatest mistakes people make are not being intimate enough, not communicating effectively, ignoring masculine and feminine energy, not going on enough dates and disrespecting each other,’ he said. 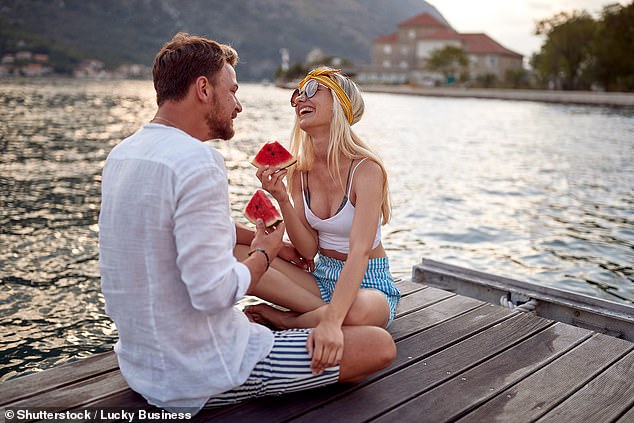 Jake shares his five pillars for a 10/10 relationship:

1. Raise attraction. It’s easy to fall into lazy habits when you feel comfortable with your other half. Don’t. Yes, you have to be loved for you who are but keep the best parts of who you are at the forefront, the parts they fell in love with.

2. Masculine and feminine energy. We’re not all the same. Respect each other’s differences. Men and women don’t think or act alike. Understand and appreciate differences and use them to build a relationship that’s richer rather than using them to tear a relationship down.

3. Courtship. Remember the thrill of dating. Don’t stop that thrill. A relationship will wither it lapses into a monotonous routine. Boredom makes people look for excitement. That’s one thing we’re all wired to do.

5. Communication. This one is tricky. Men and women often communicate differently. Allow honesty to come without being defensive. Conversely, be kind not cruel. Mostly, talk. Don’t bottle things up, especially hurts, slights and anger. You can be vulnerable. Talk can be forgiving. And conversation can make understanding and togetherness grow.

These views are backed-up in Jake’s Instagram and TikTok videos where he says it is never a woman’s job to ‘ask a guy out’.

‘The guy should plan the date, come up with the idea, he should execute the date and pay for the date. Your job is to sit back and have fun,’ he said in one video.

He also suggests women look for red flags about commitment, explaining men will let you know if they are keen for something longterm.

‘If I guy says let’s go with the flow it says he doesn’t know how to date effectively,’ he said – adding that it can be a cop out and show he just wants to ‘keep sleeping with you’.

‘If a guy says I eventually want something with you but he isn’t making any progress, keeping you on sidelines then you are a plan B.’

He also coaches people after the first few weeks of dating and says when it comes to moving in with a partner there are rules. 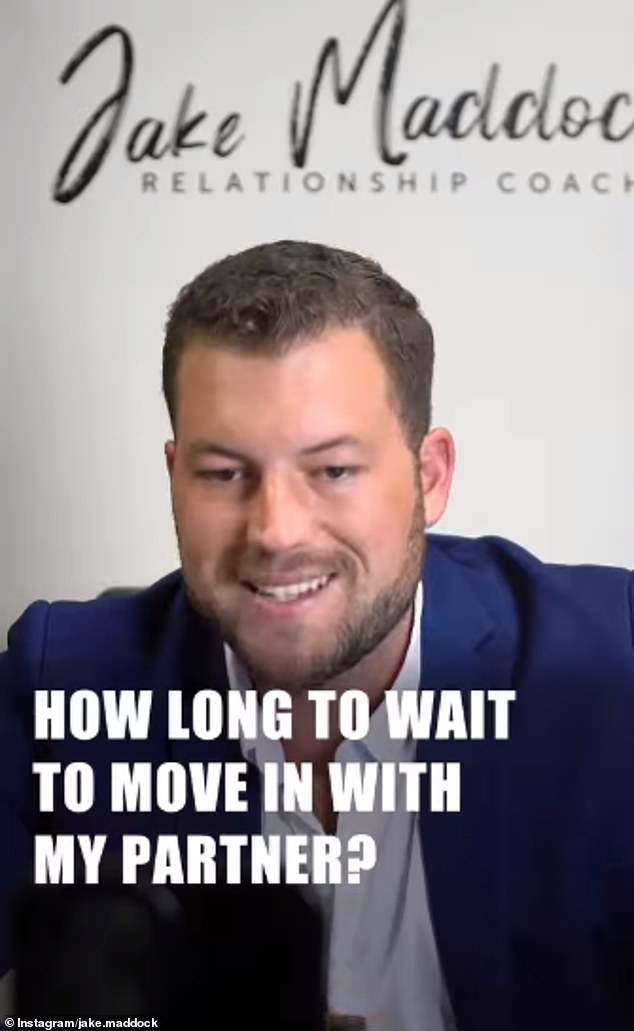 This appears to be so the woman can ‘take the man’s lead’ at home, without having to ‘surrender’ her own space.

The former soldier and builder was always in ‘blokey’ industries which he says gives him a unique insight into how men can bury their emotions.

He decided to pursue his love for love after an horrific car accident four years ago.

‘It was a pivotal moment. I could have died,’ he recalled.

‘What followed was a lot of soul-searching and then the decision to go after what would really make my life worthwhile. A few days after I came out of hospital, I decided to go all in and become a relationship coach. I love this business.’

2- Couples have ‘no excuses’ not to be intimate three times per week.

3- Relationships aren’t about equality – they are about love and happiness – which is why you shouldn’t deman things to be 50/50.

4- Men must plan, pay for and execute the entire date – and women should never ask a man out first.

5- Relationships don’t need to be fought for. No fighting involved in an ideal relationship because you both want it.

But the formal soldier’s ‘man’s man’ view appears to have had a polarising impact on some of his audience – with many women claiming his advice stretches the void between offensive and dangerous.

One such piece of advice is that couples should be intimate between two and three times per week, minimum, throughout their whole relationship.

‘There is no **qualified** sex or relationship therapist who would give such blanket advice…from, a sexologist in training,’ one woman said.

Clementine Ford commented: ‘You have no qualifications to present yourself as a ‘relationship coach’. Not only is advice like this really dangerous and predatory, but you don’t even offer a reason why? These are just your personal opinions,’ she said.

In the controversial video he said there are ‘no excuses’ for letting intimacy slide.

‘Of course there’s no excuses. Because you don’t need an excuse to not have sex. A simple no is enough. Please learn what consent is,’ one woman said.

In another video Jake says women shouldn’t ask men out – but can make suggestions about dates.

‘You want to say things like I love talking to you, when are you going to ask me on a date,’ he said.

But his followers argued this advice goes against his masculine, feminine rule.

‘If you are trying to be feminine you wouldn’t ask him for a date backwards or forwards, that’s being masculine in my opinion,’ one woman said.

‘This is kind of passive aggressive and not very attractive to me,’ said another.

While others slammed the tactic for ‘rewarding lazy, low effort men.

‘I normally agree with you, but not on this one. Does a masculine man need prompting about taking you out on a date? I don’t think so.’