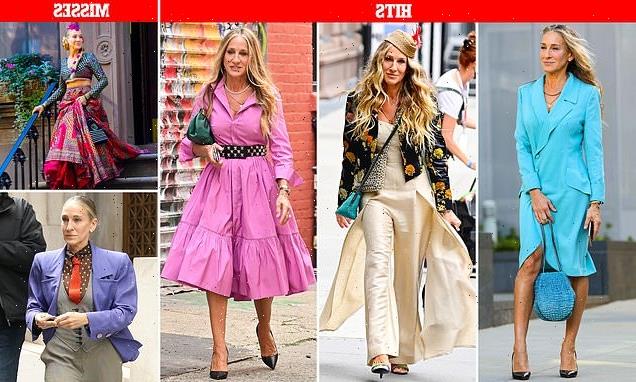 Proof that you can still Carrie on as a style icon after 50: Sex And The City is back – and there’s not an ‘old lady’ outfit in sight! LIZ JONES profiles Sarah Jessica Parker’s dazzling array of dresses

As a young woman I had a morbid fear of growing old. Looking back at how middle-aged women were portrayed on TV at the time, it’s easy to understand why.

The only show with older women as lead characters was The Golden Girls, a U.S. comedy about a bunch of snowy-haired, cardigan-wearing divorcees and widows who lived together in what felt like some kind of asexual care home.

I saw turning 50 as a death sentence. 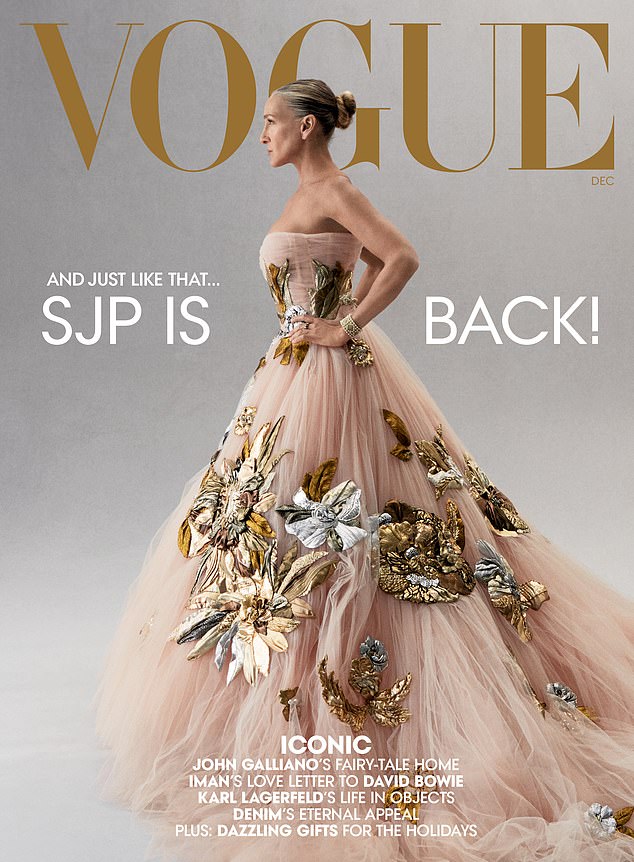 This is what fiftysomething looks like: In wildly romantic and escapist Dolce & Gabbana 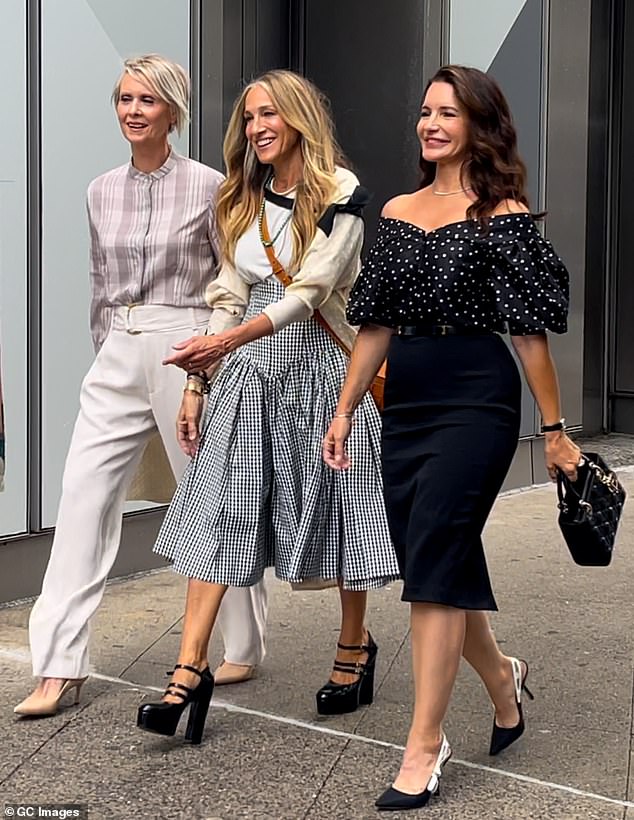 But, oh, how things have changed. ‘Older’ women are no longer gently going into that good night. And the full, Technicolor, televised proof, comes in the glorious, ballgown-clad form of Sarah Jessica Parker.

As the 56-year-old stuns on the cover of Vogue ahead of next month’s much-anticipated Sex And The City revival series, And Just Like That, SJP isn’t just ageing gracefully — she’s ageing proudly.

‘There’s so much misogynist chatter in response to us that would Never. Happen. About. A. Man,’ she says, describing the reaction after the show was first announced.

‘She has too many wrinkles, she doesn’t have enough wrinkles. It almost feels as if people don’t want us to be OK with where we are.

The corsage is back! Along with an on-trend midi teamed with those iconic blue satin Manolos worn in the first episode of the first series

At home on the range: A winning pink prairie shirt dress by Carolina Herrera (£392) and £500 Manolo Blahnik pumps

‘I know what I look like. I have no choice. What am I going to do about it? Stop ageing? Disappear?’

No, Carrie and her crew are not disappearing. Instead, they are giving us a much-needed portrayal of fabulous, feisty 50-plus women who wouldn’t be seen dead in sensible lace-ups and a home-knitted woolie.

And how lucky today’s 20 and 30-somethings are to have something positive as their reference point for middle age.

It’s too easy to dismiss SATC as fluffy nonsense about heels and handbags. Yet with women’s rights being eroded around the globe, the new series could not come at a more prescient time.

When it first aired in 1999, SATC liberated a generation, featuring women who didn’t need a man to rescue them or buy them nice things and put female friendship first. 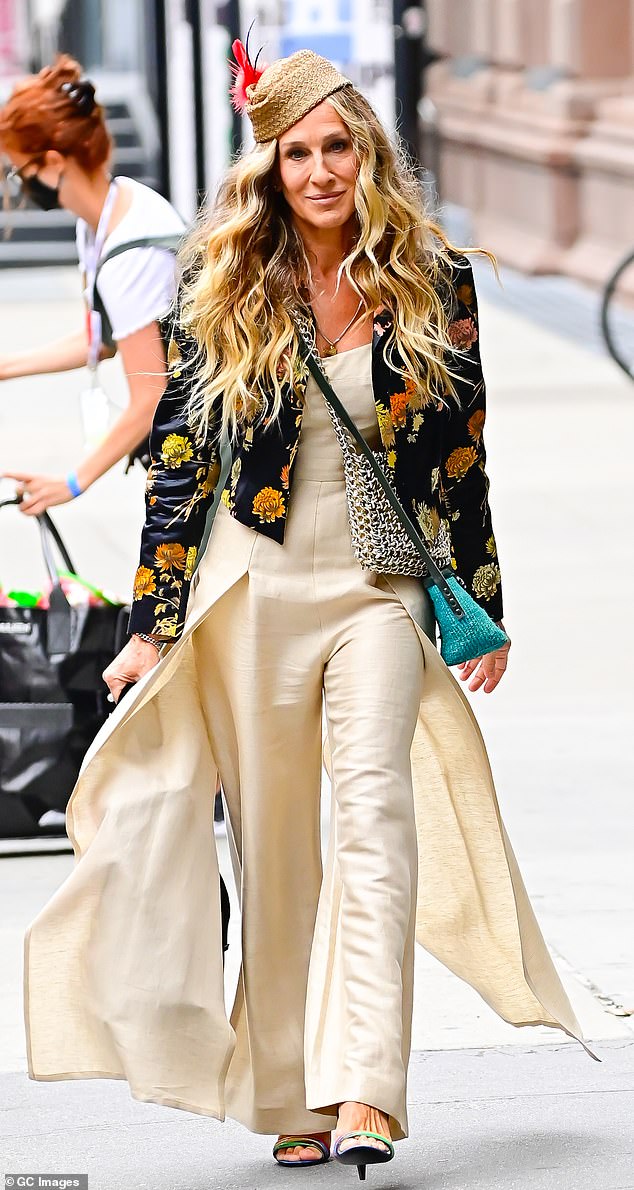 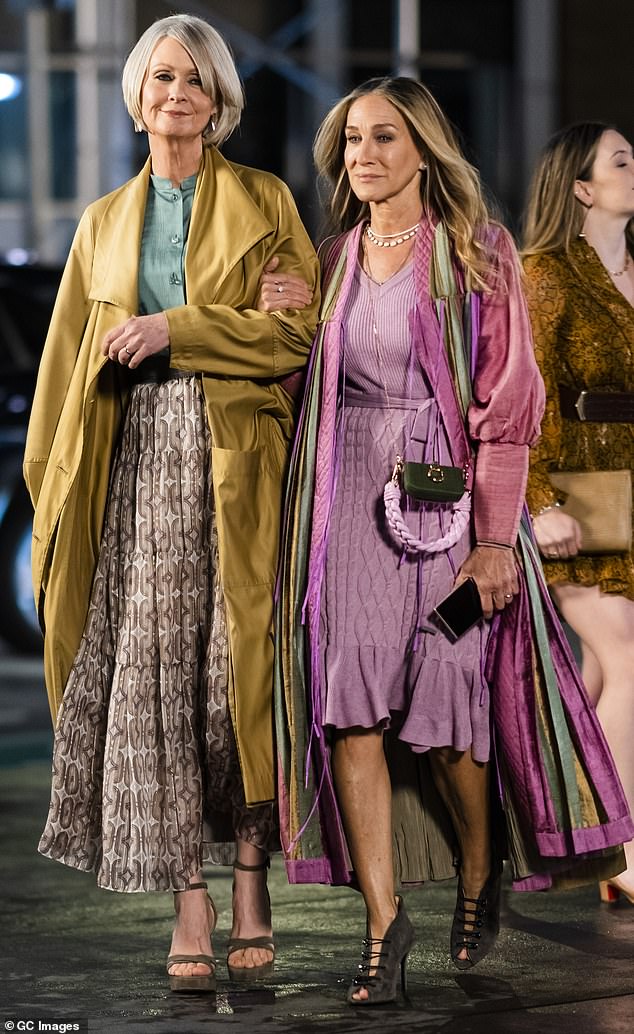 Today, we need it more than ever.

That a new series has been made where the heroines are hurtling happily, and unapologetically, towards 60 is revolutionary.

To see Sarah Jessica Parker with a clearly lined face, unashamed to enjoy fashion that is more out there than ever, is groundbreaking.

Hopefully this new series will remove the fear of ageing (surely the last shackle to bind us in the West?) from a new generation of girls.

Life isn’t over once we hit 60 — in fact, we become more powerful, more single-minded, more determined to grab life by the horns because we have nothing to lose.

We no longer need a man to give us a child, a home, or status, and we still feel 21 years old inside.

I cannot emphasise enough the impact when SATC first hit our screens.

I was in Milan, a 30-something fashion editor, attending the catwalk shows in my minimalist black trouser suit and big black bag.

I turned a corner to find a long, over-excited queue of young women outside Fendi — formerly, a fusty fashion house no one cared much about. 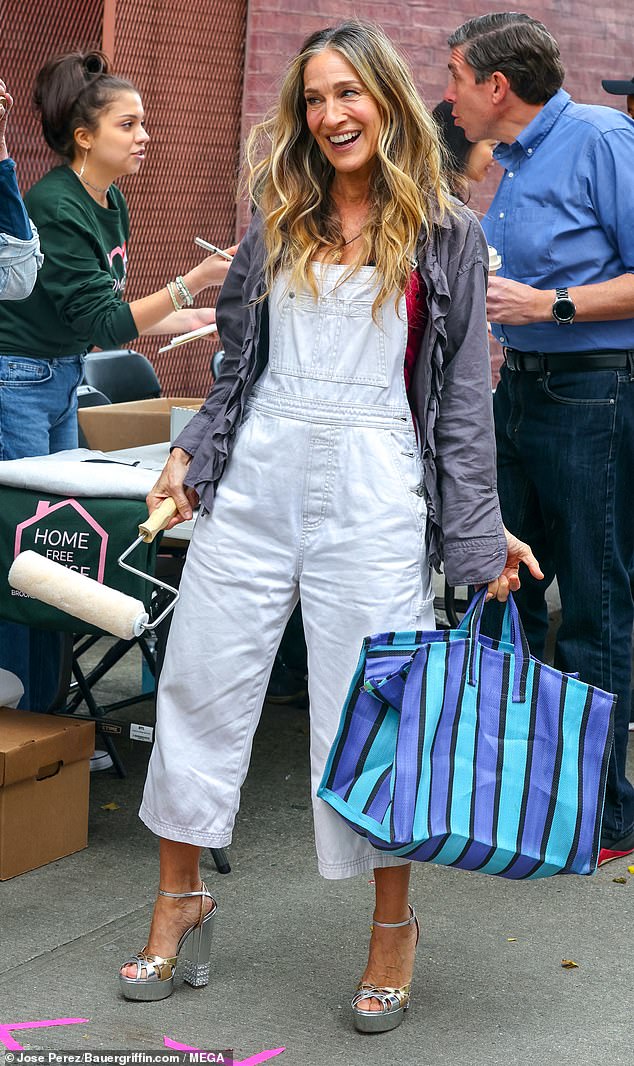 Seriously? Dungarees, in your 50s? Let’s hope she doesn’t break a hip in those shoes! 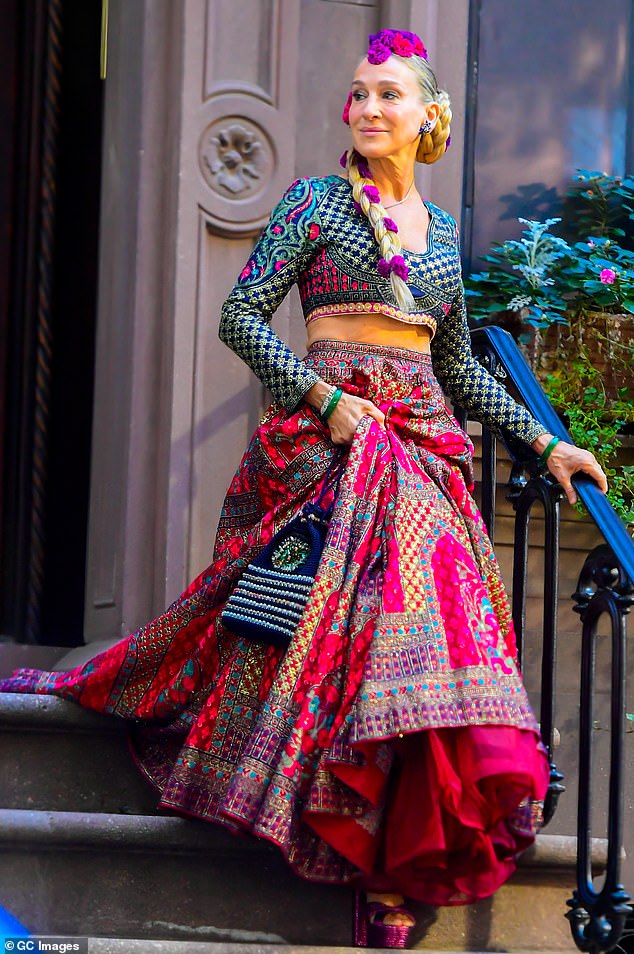 Too much material, girl! She could be Madonna at a fancy dress bash in Falguni Shane Peacock ‘Lekha’ lehenga set

Each woman wanted to get her hands on the baguette, a little bag, or the croissant, an even littler bag. And the more bling the better: mine was orange with tiger stripes picked out in sequins.

It was the accessory that gave us the best line in all six seasons of the original show. When Carrie is mugged at gunpoint, told to hand over her bag, she tells the hoodlum briskly that it is, in fact, ‘a baguette’.

Such details are more important than life itself.

The show was an education. We became literate in formerly niche labels — Manolo Blahnik was catapulted into the stratosphere, while John Galliano became a household name when Carrie emerged in his monochrome ‘newspaper’ dress.

We learned about sexual positions, and the precise ingredients of a cocktail.

Carrie, Samantha, Miranda and Charlotte may have looked like simpering fools, staggering in their heels, but they had cores of steel.

Their men were mere foils, with not a scintilla of the girls’ wit or joie de vivre.

However, I would wager the show, if not responsible for global warming, at least paved the way for fast, disposable fashion. Shopping became no longer joyful, but a disease. 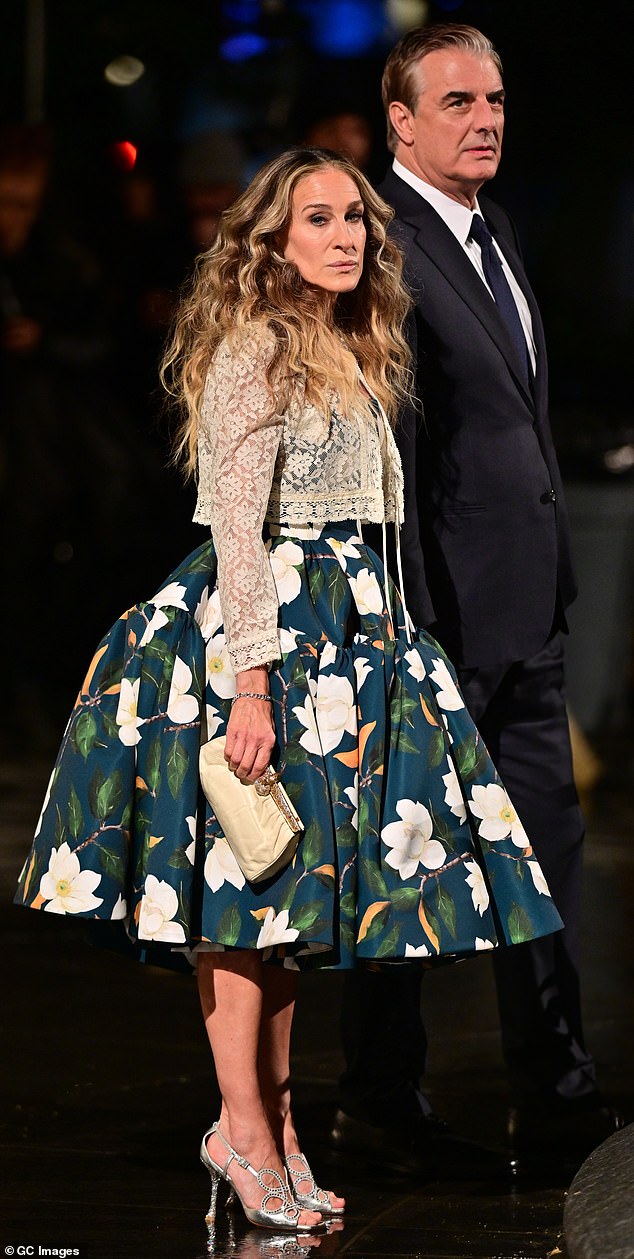 A Big mistake: In Paris with her main man. But is this Oscar de la Renta dress too bloomin’ much?

Risky business: But the shoulder pads (outfit by Gaultier) are way too 1980s

I remember being in LA for the Oscars and demanding Barneys fly the silver Manolos with Swarovski buckle to my hotel room from New York. I had Carrie’s Apple laptop.

I had her job as a dating columnist. I was damned if I wasn’t going to own her shoes, too.

So it would be an underestimate to say I’m excited about the reboot, which will air on Sky.

Photos show that Carrie’s clothes are more theatrical than ever. In charge of the wardrobe are Molly Rogers and Danny Santiago, protégés of the legendary Patricia Field, who masterminded the wardrobe for all six SATC seasons and subsequent two films.

They have injected some new labels that weren’t even born last time around, such as eco-brand Gabriela Hearst.

Yet there is a joyous nod to the original, with Carrie re-wearing old favourites, such as her blue Manolos — as familiar to me as my own face.

And, of course, she still carries that purple baguette.

But I wonder what Millennials and Generation Zs, unable even to get on the property ladder, let alone buy bags full of designer goods, will make of it all.

I hope they will be grateful we older women blazed a trail, not just for combats worn with stilettos, or multiple crossbody bags, but for friendship.

For being there for each other through thick and, in Carrie’s case, very thin indeed.