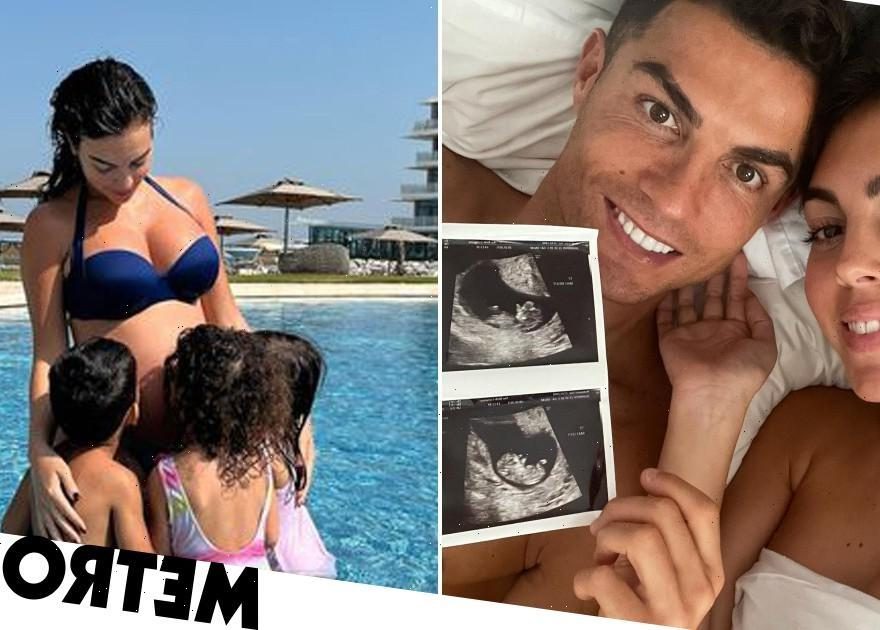 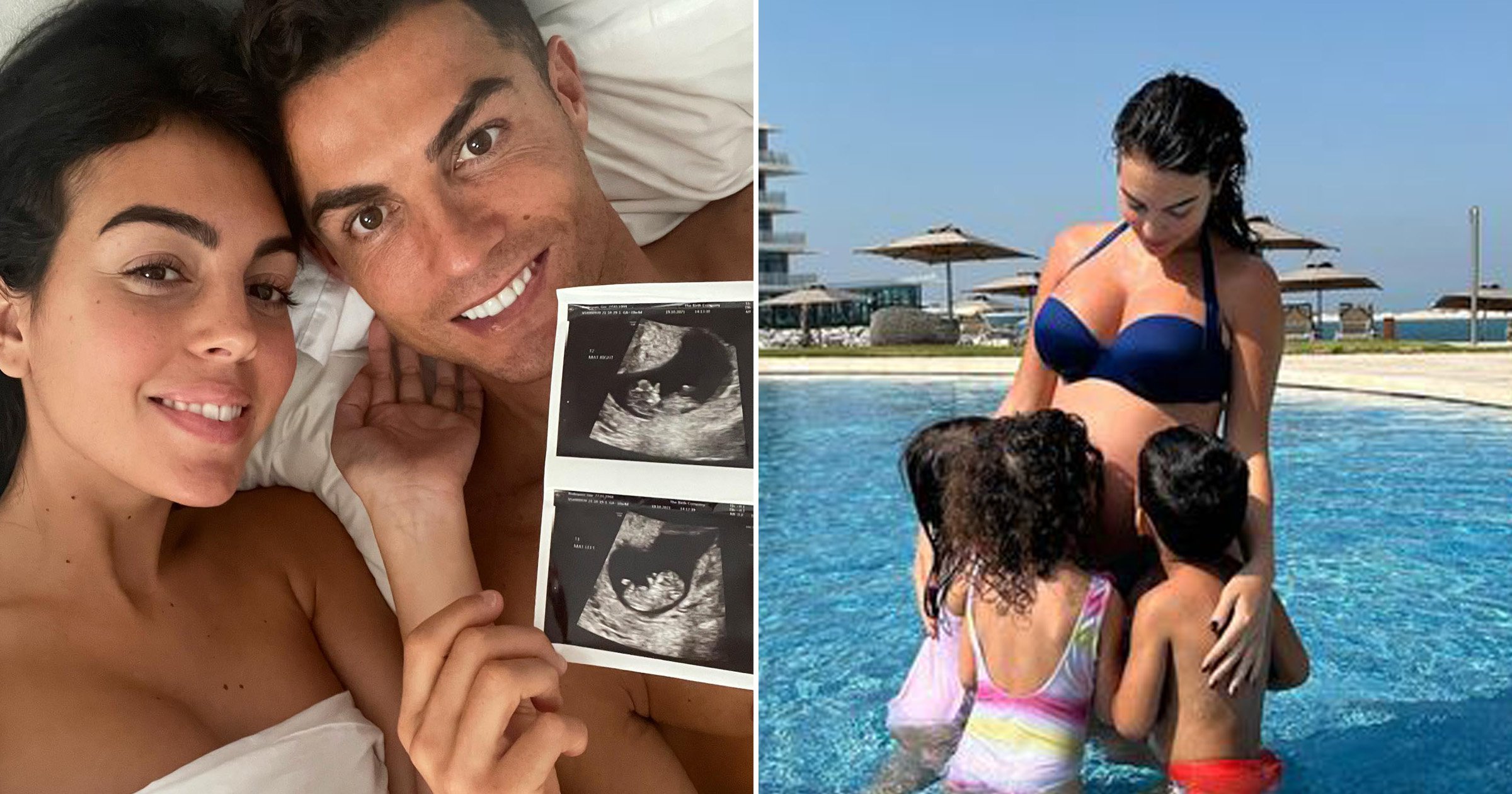 Last night, my husband and I were sitting together after putting the children to bed.

Suddenly, he looked up from his phone and said: ‘Have you seen this? Ronaldo’s baby boy died, he was a twin’.

I heard the words, but sat in silence as they echoed around my head. I understood what my husband had told me but it took a while for a response to leave my mouth.

‘Like me? Like us?’ I thought, the last six years flooding back in a rushing moment, remembering as clearly as if it was yesterday.

My heart sank for Ronaldo and his partner Georgina Rodriguez as I read the footballer describing the moment as ‘the greatest pain any parents can feel’. And he’s right.

I remember the surprise and tears of joy running down my face when the sonographer told me there were two heartbeats, back in March 2015.

My husband and I had been trying for a while to get pregnant again, and were excited for our daughter Ria, then three, to become a big sister.

We fell pregnant after our first IVF procedure and were told there could be a chance of carrying twins – with chance becoming a reality six weeks later.

Aside from the fact that I’d always wanted to have twins since I was young as my mother had twins in her family, we never expected it to happen to us.

We decided to go on holiday to celebrate, travelling around Holland as my husband was going to be working there for five weeks.

The excitement kept growing and Ria would constantly talk to my tummy. Life was good, and the future looked perfect.

At 18 weeks, I woke up in the middle of the night and felt a bleed. The wonderful lady who was hosting us looked after Ria while we rushed to the hospital. After an examination we were told everything was fine, and revealed that one baby was definitely a boy.

Discovering the gender made it feel more real for us, and we were delighted at this point that we had one of each. We decided to only share this news with our immediate family who were all very happy for us.

However, these episodes of bleeding started becoming more frequent, with another at 21 weeks. During a scan on our return from Holland, it was confirmed we were expecting twin boys. That was the good news. The bad news was that twin two may have a hole in his heart.

I felt helpless and scared for my baby but knew the hospital had a plan. They had a long meeting with my husband and I and explained everything step by step, how they have treated many babies with this condition and answered any questions we had. This really helped me feel prepared and that we were in good hands.

This led to further anxious hospital appointments where I was told that my twins’ amniotic fluid had to be tested to look for any abnormalities, but I was also told this procedure could be fatal for my babies.

I found myself in a very difficult position, torn between life and death, but decided to go ahead with it because I owed this to my babies to give them the best possible chance at survival.

I knew how easily I could end up thinking of the worst, so I tried my best to think positively and that if there was a chromosome defect then we would deal with that because several other parents do. The results came back fine and there were no abnormalities, which was a huge relief for us.

At 26 weeks, my twins were delivered early by C-section, due to a haemorrhage and they were transferred to a level three hospital. I followed a few days later.

Two weeks later, Roop (twin two) had sepsis, amongst other factors working against him. He was on a ventilator, fighting for his little life, and I knew he wouldn’t be with us for long.

After our meeting with the consultant and nurse telling us that Roop’s health was not looking good, I said: ‘He’s going to die, isn’t he?’ I was waiting to hear these words but no one was saying them, so I did.

The morning of his passing, we saw his toes had started to change colour to a dark purple. He was so small and helpless with so many wires and tubes around his body but the doctors told us they were ‘very surprised he lasted as long as he did’. That he was ‘a fighter’.

On October 9 2015, baby Roop was given to me in my hands for the first time. I waited until my husband was ready to let him go. Once we said our goodbyes we told the nurses and they took off his manual ventilation. As his ventilator was switched off, I was overcome by his calmness and strength. I didn’t shed a tear.

As I spoke to him, telling him how proud we were of him fighting for so long and that he will always be remembered, he opened his eyes and smiled at my husband and I. He made me so happy that I didn’t realise when he passed as he lay in my arms.

The same day I held his brother Guraj for the first time, and it was a wonderful moment for us both on one of the darkest days of our lives. Later that afternoon, we held Roop’s coffin in our hands, too. I thought to myself that this was God’s way of telling us he was too special for this world.

Going through such trauma can have massive affects on your mental health. I was already on antidepressants from having PND with my first child so I had a safety net, but I still felt heartbroken.

A massive piece of me had been taken away, the other half of my son had gone. I muddled through as Guraj spent just over three months in NICU before coming home.

Guraj is now six years old and I decided to tell him about his twin earlier this year. He had many questions, like: ‘Which star is he mummy? Where is Heaven? I miss Roop, Why did he die?’ and with each one I felt he was the closest person I could ever share this story with.

Talking to Guraj about his brother Roop really helped to bring a little bit of closure for me. I wanted to share as much as I could with him. We decided to choose a plant, a peace lily, for their plant pot, which was given to us by a charity from the hospital that had hands and foot prints of both brothers as a keepsake.

Every year is bittersweet when celebrating birthdays and reaching milestones. When we celebrate Guraj’s achievements, we remember Roop, too.

I know Ronaldo and his family will soon do the same. It’s impossible to ignore the dates looming on the calendar. Impossible to forget the child you should have had sitting next to your twin, blowing out the candles on their birthday cakes, opening their matching presents.

I am always growing, learning and discovering about trauma, and how it has shaped my life. I knew, deep down, that my experience would lead somewhere – that Roop would give me life, somehow.

It’s why I started a clothing brand called Hello Look At Me Now, to create awareness and celebrate the journeys of women who have been through trauma to empower them and share their stories with the world.

Ronaldo’s story is one of many – one of too many. It’s a pain I know all too well. It sometimes encompasses every fibre of my being, but I stay strong for Guraj.

As he grows up, I’m sure I’ll study his face for signs of Roop. Wondering what could have been, but what we have lost will give us strength.

I hope Ronaldo finds the same strength that I have, and learns to celebrate what he has gained, too.