Melissa Thompson, an activist for gay rights, clashed with Afsar, telling him views were poisoning children.

Viewers largely agreed, with some taking to Twitter and calling him ‘cold’ and ‘rude’ for appearing not to look at Melissa throughout the segment. 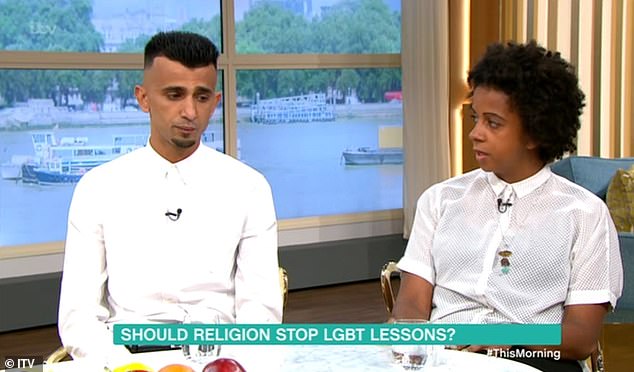 Muslim protester Shakeel Asfar was slammed by This  Morning viewers for his arguments against LGBT inclusion lessons, following seven weeks of protests at Anderton Park Primary School in Birmingham. He was joined in debate by gay rights activist Melissa Thompson 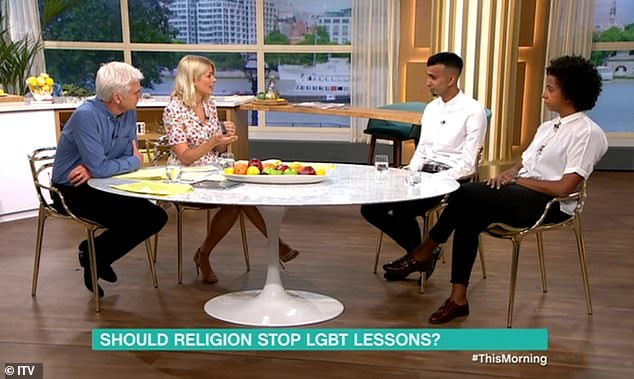 Asfar was slammed for ‘poisoning children’ by activist Thompson, who appeared on the programme to discuss whether religion should stop LGBT lessons being taught

Viewers were quick to slam Afsar, with one suggesting he was ‘cold’ and ‘rude’ for not looking at his fellow guest

One wrote: ‘If children in schools learn about different religions and faiths as part of the curriculum despite their own beliefs, why should teaching them about the LGBTQ+ community be any different? #ThisMorning.’

While another commented: ‘How cold and rude is Shakeel Afsar? He did not even look once at the woman debating with him, that behaviour shows exactly who he is #ThisMorning’

It comes after seven weeks of protests by Muslim parents who claim LGBT inclusion lessons are a breach of their religious values and are aggressively promoting homosexuality.

Earlier this week, Labour MP Jess Phillips was involved in a furious row with Asfar  outside a school in Birmingham today amid ongoing protests about LGBT education.

And today LGBT activist Melissa Thompson slammed him on This Morning, telling him he was ‘poisoning children.’

Asfar told Holly and Phil that ‘parents feel that at a primary school age, the child is not of an age to understand such complex relationships as LGBT.’

The Muslim man, who previously said teaching children about LGBT issues ‘planted a seed in them’, said: ‘Parents feel at primary school age we should be teaching the children about humanity and respecting humanity.’

Melissa called his argument ‘a bit rich’ and told him that his protest was causing great offence to the LGBT community.

She said: ‘You are being intolerant and discriminatory towards gay people. It’s hugely damaging to the LGBT community.’

She went on to say that children’s literature featuring LGBT characters didn’t brainwash them, but in fact: ‘It will give children an appreciation of the Britain we live in today.’

But Asfar retorted: ‘If a group of people feel religious, moral or family beliefs are being infringed on, for example, If they think their children are going to school and being taught something that is contradictory to their religious belief. Now this is their opinion.

‘We have a parent who is a Christian catholic, according to his morals homosexuality is not acceptable morally to him. 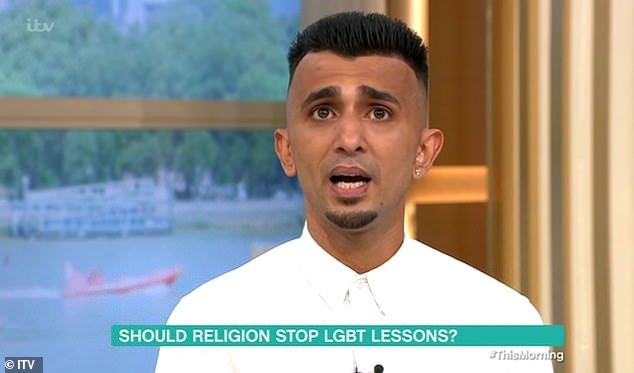 He argued that Islam wasn’t the only religion that disagreed with teaching children lessons about LGBT issues, and referred to a Christian parent at the school

Meanwhile Phil pointed out that he was discriminating against them, by teaching the children to be ‘less tolerant’ about different relationships.

While Asfar attempted to defend himself by saying he had never had an issue with LGBT people in the past, Melissa went on to suggest that some of the children in the school could well be gay.

As the segment was swiftly brought to a close, the LGBT campaigner passionately told Asfar ‘you are poisoning children.’ 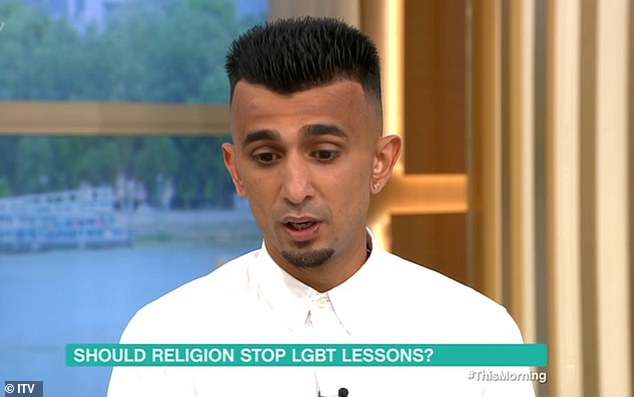 Asfar, who attracted attention earlier this week when a clip of him arguing with Jess Philips MP went viral, argues that he isn’t homophobic

Viewers were highly critical of the Muslim protestor, and took to Twitter to slam his views.

‘We are a same sex married couple with two adopted children who will grow up to be extremely tolerant,’ one person wrote.’Surely they would find it confusing same sex relationships aren’t spoken about in school?’

One wrote:’You can’t coexist if you don’t have any understanding!’

Another commented:’Just watched that segment on #ThisMorning, it’s clear the man is just homophobic. 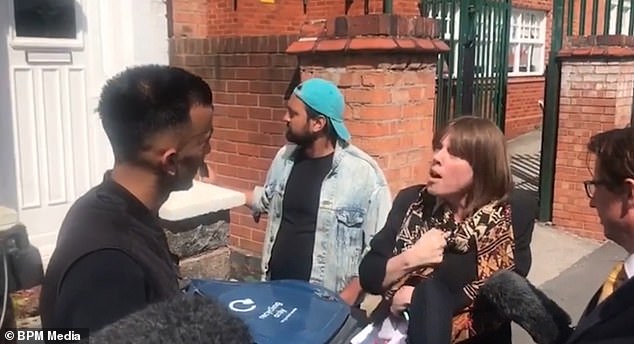 Many viewers took to Twitter to slam Asfar’s arguments, with some suggesting it was ‘homophobic’ of him

Other viewers agreed with Asfar, arguing that teaching children about  different sexualities would be confusing 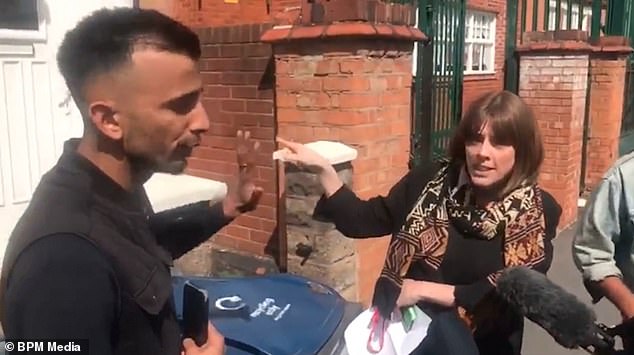 Birmingham Yardley MP Jess Phillips gestures towards parent spokesman Asfar, who believes ‘Parents feel at primary school age we should be teaching the children about humanity and respecting humanity.’

A third suggested:’Children get taught about other peoples religions in school but God forbid they’re taught about LGBTQ rights #ThisMorning

But some agreed with Asfar, with one writing: ‘I think teaching young children about the sexuality continuum would be confusing. I worry that children who are heterosexual may be concerned internally about a false sexuality that isnt actually there. #ThisMorning’

The Birmingham parents’ anger was originally aimed at another Birmingham school’s assistant headteacher Andrew Moffat, who is behind the No Outsiders lessons.

He created the scheme to teach children about the Equality Act and British values.

Pupils at the school – rated outstanding by Ofsted – have five of these lessons a year, covering areas outlined in the Act: age, disability, gender reassignment, marriage and civil partnership, pregnancy or maternity, race, religion or belief, sex and sexual orientation.

The programme was first piloted at the school in 2014 and is now also taught at dozens of other schools in the country.