Domestic violence victims would get 10 days of paid leave under new rules Labor is expected to put to Parliament soon.

Shadow cabinet is considering legislation for the change on Monday night and, if approved, it will go to caucus on Tuesday. It's expected to get the nod as the increased leave provision was part of the platform Labor took to the last election. 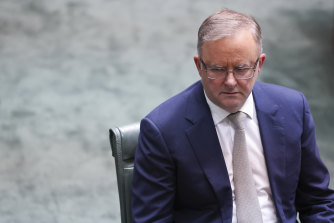 Opposition leader Anthony Albanese has called domestic violence an epidemic and said Australia must confront the awful truth of its existence.

At the moment, domestic violence victims can get up to five days of unpaid leave each year under the national employment standards, after the Fair Work Commission ruled in mid-2018 it should be part of all modern industry awards.

The leave is seen as making it easier for victims to leave abusive relationships by giving them time off work to attend court hearings, appointments with counselling, medical or legal specialists or find alternative housing or accommodation.

The latest data from the Workplace Gender Equality Agency, released last Thursday, shows more than a third of companies already offer some form of paid leave, a "solid increase" from a year ago. Two-thirds of employers had a formal policy or strategy to support employees experiencing domestic violence.

Domestic violence campaigners have warned of a spike in abuse during the coronavirus lockdowns. Legal services and advocates have been pleading with the government for extra funding, revealing they were already turning away thousands of women before the pandemic struck.

A survey of 15,000 women found one in 20 experienced violence between March and May this year, and more than one in 10 reported at least one form of emotionally abusive, harassing or controlling behaviour. Of those who were violently or sexually abused, two-thirds said it had happened for the first time.

Consultants KPMG estimated in 2016 that domestic violence costs the economy $22 billion a year, including $860 million in absences from paid and unpaid work and the inability to perform household tasks and voluntary work.

A separate analysis from the Centre for Future Work found offering paid leave to victims would reduce absenteeism and turnover of employees, therefore saving employers the costs of hiring and training new staff. It also estimated offering universal domestic violence leave would cost between $80 million and $120 million a year across the economy.

Unions have been pushing for the extra leave for years. Mr Albanese has also publicly backed it since at least 2018.