Rising star Kingsley Ben-Adir, whose portrayal of Malcolm X could win him an Oscar, reveals he asked for a racist scene to be removed from US series The OA – but was told ‘it’s a reality’

Kingsley Ben-Adir, who shot to fame in Vera and Peaky Blinders and has more recently tackled the roles of Malcolm X and Barack Obama, says he wishes producers wouldn’t always draw attention to racism unless they’re willing to explore it properly.

The 34-year-old, who was raised in Kentish Town, is being tipped for an Oscar thanks to his role as Malcolm X in his latest film One Night in Miami, which was released on Friday, and says he’s faced awkward discussions about how racism is portrayed on screen.

The star told The Sunday Times he now wants to see ‘people seamlessly existing in drama without drawing attention to what colour they are’.

Kingsley Ben-Adir, (pictured) who shot to fame with his portrayals of Malcolm X and Barrack Obama, has opened up about on-screen racism

Speaking about his role in Netflix’s American mystery drama The OA, he said he’d asked the shows creators, Zal Batmanglij and Brit Marling, whether a scene of racial abuse against his character was necessary.

He said:  ‘I remember talking to the Zal and Brit about a bit where, randomly, I’m racially abused. I just asked if we needed this.

‘Why do I need to be racially abused? And not stand up for myself? If we’re not fully exploring the issue, you don’t need to keep throwing the idea in.’

Kingsley, whose mother’s parents are from Trinidad and Tobago and whose father is English, said he was told the scene was ‘a reality’.

The actor also discussed the inclusive casting in new Netflix hit Bridgerton, saying he struggled to understand why period dramas with all white casts are still being made, referencing last year’s period adaptation of Jane Austen’s Emma.

The feature, which follows the antic of a young woman in Georgian-era England as she occupies herself with matchmaking, was criticised at the time for its ‘whiteness’.

The actor simply said: ‘Why are we f***ing making Emma?’ 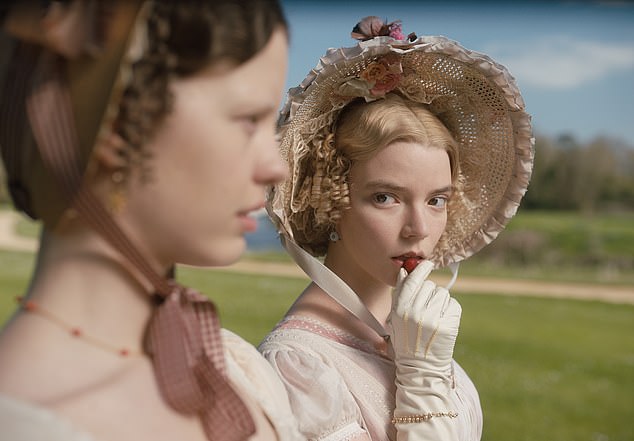 He instead praised High Fidelity which is a story of people of colour in love rather than caught up in conflict.

Kingsley added: ‘Dramas about social justice have their place but we need to do normal stuff too. You need people seamlessly existing in drama, without drawing attention to what colour they are.’

Kingsley’s most recent project is One Night in Miami, directed by Regina King on her feature directing debut.

It is a fictional tale set in 1964 that sees Malcolm X meet with Muhammad Ali, Sam Cooke and American footballer Jim Brown to discuss the responsibility of being successful black men during the civil rights movement.

The film wrapped just months before the death of George Floyd which sparked racial tensions and rioting across the United States after footage emerged of the 46-year-old being restrained by white police officer Derek Chauvin. 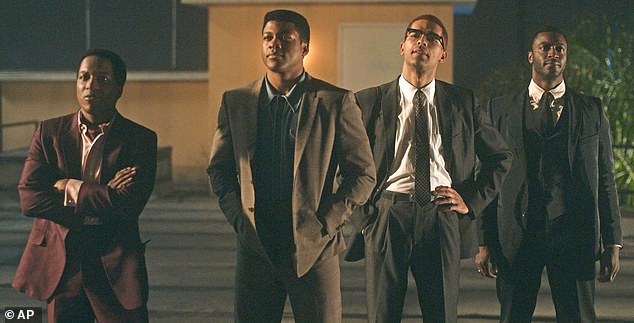 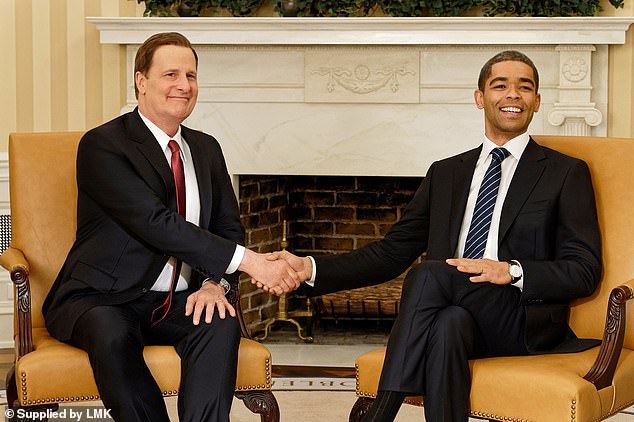 Last year, he played Barack Obama in drama The Comey Rule (pictured) in which FBI director James Comey takes on challenges in politics and ethics as he serves under United States President Donald Trump

Kingsley said he appreciated how important the film could be long before the death of George Floyd and the Black Lives Matter protests.

The star opted to portray Malcolm, who died in 1965, as sweet and bashful – based on a lesser-appreciated description used by friend Dick Gregory – but said he wondered what he would be thinking now if he was still alive.

But Kingsley, who revealed he was forced to move to America ‘where opportunities are in a different league’, is no stranger to tackling roles that carry great heft.

Last year, he played Barack Obama in drama The Comey Rule in which FBI director James Comey takes on challenges in politics and ethics as he serves under United States President Donald Trump.

He admitted that he was anxious about the performance as Obama remains one of the most famous men on the planet: ‘So much Obama anxiety was around sounding like him because his voice is so recognisable.’