“Definitely didn’t see anything coming that came,” said Clarkson of her divorce.

2020 has been challenging for a lot of people, or as Kelly Clarkson summed it up in her show’s Season 2 premiere, “2020 has been a dumpster fire. Yup, all the words I can’t say on this show just piled together and on fire. That’s really what it feels like.”

As she’d indicated prior to the relaunch of her eponymous talk show, Kelly did not dive too deeply into her recent decision to divorce, but she did reveal that she “definitely didn’t see anything coming that came.” 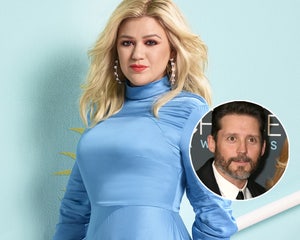 As children of divorce themselves, both Kelly and her husband Brandon Blackstock have kept their primary focus during these challenging times on their own four children.

“What I’m dealing with is hard because it involves more than just my heart, it involves a lot of little hearts,” Kelly told her virtual audience. “I’m usually very open and I usually talk about everything, but in this case I will talk a little bit here and there about it affects me personally, but probably won’t go too far into it because, you know, I’m a Mama Bear and my kids come first.”

That isn’t to say the bigger story won’t come out, just perhaps not on her show. As Kelly explained, it was her mother who first taught her that she could express some of those emotions that were too hard to talk about through a pen.

“I probably won’t speak about it too much, but you will definitely will hear it musically, probably. That’s how I became a songwriter,” Kelly explained. “Music’s always been my outlet to help me get through difficult times.”

It also explains why Bob Saget was hanging out at the beginning of her monologue, as he was part of helping her get through and process everything that 2020 has wrought. Him and the classic sitcom he represents.

In fact, while Bob was in the studio with Kelly, she was also joined by fellow “Full House” stars Jodie Sweetin and Bob Coulier, “Cheers” stars George Wendt and John Ratzenberger and even “Mary Tyler Moore” star Ed Asner.

They all showed up as part of her new innovative virtual audience. Where the live audience usually sat was instead several rows of massive digital screens sharing the smiling faces of fans from around the country, including the aforementioned sitcom legends front and center.

They were there as part of her celebration of the comfort we find in these old shows during troubling times. Plus, she sang snippets from all of those theme songs in her latest Kellyoke sequence (with an assist from Bob), as well as “The Golden Girls.” 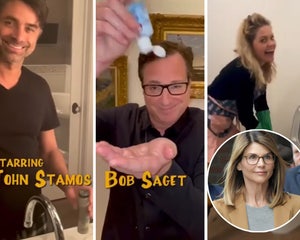 “I wanted to sing those classic TV theme songs because in hard times when we’re separated, it’s those nostalgic moments with family and friends that hold us together,” she said. “Plus, we’ve all been on lockdown with nothing else to do but really binge the old shows because we’re out of all the new ones because nobody can tape anything, it’s fine.”

But hey, Kelly is among many shows ramping back up to some semblance of normal, with scripted productions resuming and even a hint of a television fall season coming over the next several weeks on television.

It’s not what we’re used to by any means, but it’s something. And in 2020, we’ll take almost anything positive!