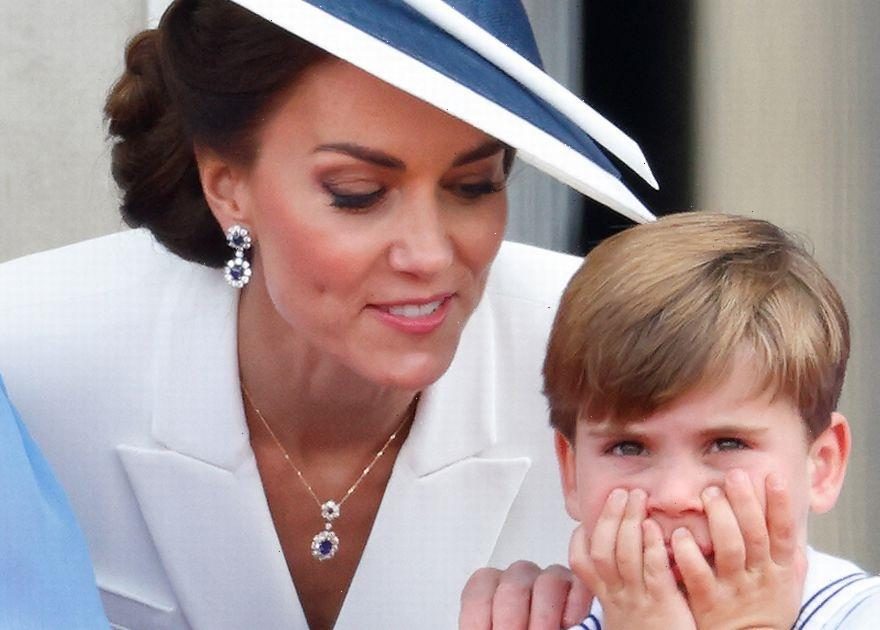 All eyes were on Prince George, Princess Charlotte and Prince Louis when the Queen's Platinum Jubilee celebrations kicked off on Thursday 2 June, with the trio attending their first ever Trooping the Colour carriage procession together.

The Duke and Duchess of Cambridge's three children were joined by mum Kate, 40, and grandmother Camilla, 74, as they rode in a carriage through the crowds.

There's no doubt that the procession was overwhelming for George, eight, Charlotte, seven, and four year old Louis, but Kate had a number of clever tricks to ensure they remained calm during the celebrations.

As they travelled towards Horse Guards Parade, Kate could be seen pointing out flags in the crowd and explaining to her children where they were going, according to The Mirror.

Get exclusive celebrity stories and fabulous photoshoots straight to your inbox with OK!'s daily newsletter

The Duchess appeared to exclaim: "This is wonderful, look at all these people!" according to a lipreader, before continuing to chat to George, Charlotte and Louis to keep them calm.

George reportedly turned to the crowd and said: "Wow", with Charlotte later saying the same as they saw the thousands of people who had come to celebrate their great-grandmother's 70-year reign.

As the carriage entered Horse Guards Parade, the trio respectfully bowed their heads before then heading up to join the Queen and other royal family members on the balcony.

Kate continued to ensure they were calm in front of the crowds, and could be seen keeping an eye on Louis on the balcony.

The four year old could be seen holding his ears as the planes came past, before pulling a series of hilarious facial expressions as he chatted to the Queen.

According to Jeremy Freeman, an expert in lipreading, Louis asked the Queen: "Are the Red Arrows coming?" to which she replied: "I hope so."

They continued to chat, and then a proud Kate turned to Prince William to say, "look at him", as Louis covered his ears, according to Jeremy.

Later on, the mum-of-three could be seen telling her youngest son to stop sucking his thumb as he slowly removed his hand from his mouth.

On Sunday, the Duke and Duchess of Cambridge attended the Platinum Jubilee Pageant with their three children too, and Louis' cheeky antics stole the show again.

He was distracted as the show got underway, and he was spotted pulling plenty of faces before covering Kate's mouth with his hand to shush her.

Kate did her best to keep her composure as she removed his hand from her face, before the duo shared an adorable hug.

For all the latest celebrity gossip, sign up to our daily newsletter here .