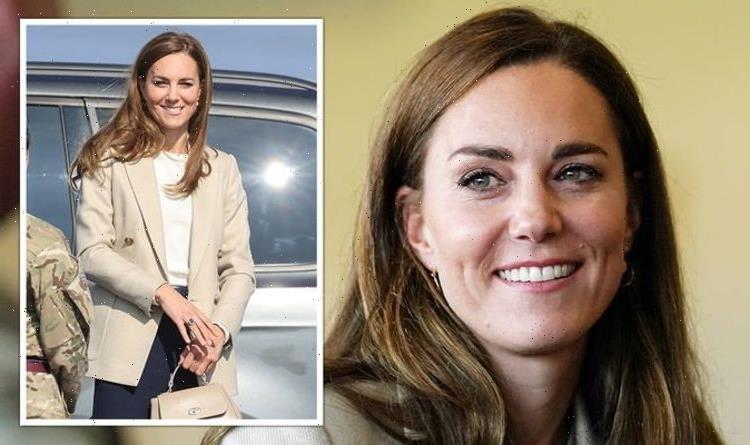 Kate, Duchess of Cambridge visited RAF Brize Norton on Wednesday to meet the personnel who assisted with the evacuation efforts in Afghanistan last month. The Duchess had not been seen publicly since July when she attended the Wimbledon men’s singles final and Euro 2020 showdown with Prince William and Prince George.

Over the last two months, Kate has enjoyed a summer break away from the royal spotlight.

And according to a royal expert, Kate’s time away from engagements has served her well, as she returned this week looking very happy to be back at work.

Body language expert Judi James told Express.co.uk: “Looking healthy and relaxed after her break, Kate’s body language does show the signs of a return to those signature barrier gestures she often used prior to some of her more assertive-looking appearances.

“Her smile registers genuine pleasure here to be returning to duties but both her hands and that small bag are being held in front of her torso here, while that unusually over-sized jacket does a lot to smother her famously slim frame.

“Fans hoping for a pregnancy might love the look of the jacket being worn open in the way that both Kate and Meghan have masked their bumps in the past but this could of course just be a new bit of styling for the Duchess.”

Kate met with people involved in Operation Pitting, which oversaw the evacuation of more than 15,000 people from the Afghan capital of Kabul.

Kate is said to have expressed her “thanks and her pride” in the job all those involved in the operation had done.

While speaking to a group of personnel, Kate commented on how some of the rescue flights included “babies, tiny babies”.

Corporal Guy Watts, who did seven flights to Kabul to help with evacuations, said: “She appreciates that some of it wasn’t easy.

“And she appreciated how smoothly we managed to keep things running.”

For the meeting at RAF Brize Norton, Kate donned a beige blazer which she paired with a cream top.

She also wore a pair of navy belted trousers and accessorised her outfit with a matching beige handbag.

Kate hasn’t been seen in public for more than two months due to the summer holidays.

Kate and her husband Prince William reside in Norfolk at their Anmer Hall residence a lot of the time, while Kensington Palace is their base in London.

This summer, the Cambridge’s are believed to have spent a lot of time with family members.

The family reportedly made the trip up to Scotland to visit the Queen, who is in residence at Balmoral.

And Kate’s brother James Middleton got married last weekend in France, with Cambridge family thought to be in attendance for the big day.

The Cambridge’s two eldest children Prince George and Princess Charlotte attend St Thomas’s Battersea, so the Cambridges live in London during much of term time.