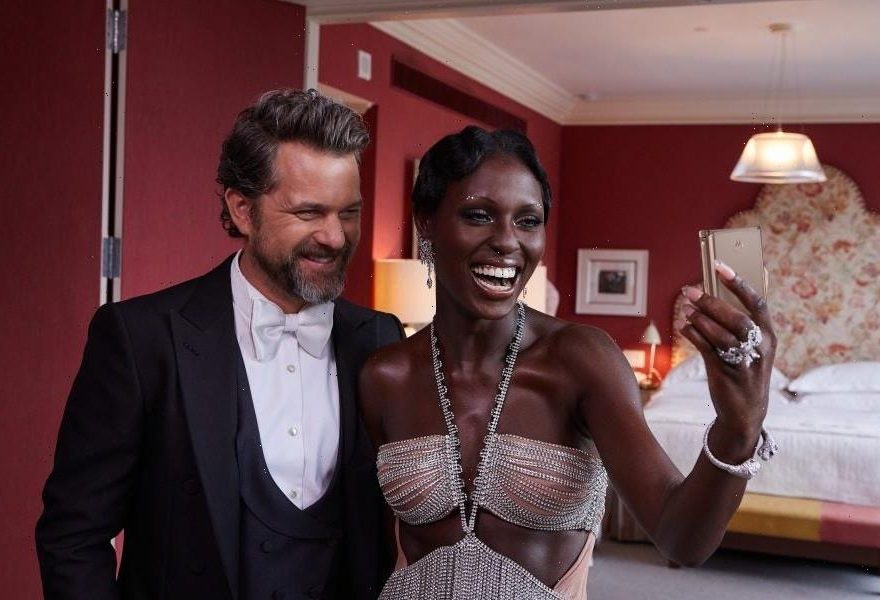 It’s not every day that you come across a fierce couple, but Jodie Turner-Smith and Joshua Jackson are certainly that. The stars, who met at a party in 2018, are known for their good vibes and openness, including, as Jackson shared, that they started as a “three-night stand” that just never ended. The two went on to get married in 2019 and welcome their first child in 2020. Since then, they’ve become a favorite Hollywood couple of many. And while more attention can bring negativity, the pair is hanging up on it.

ESSENCE spoke to the couple ahead of the Met Gala about the campaign they’re taking part in with the classic Motorola razr phone called #HangUpOnIt. For those in the dark, the campaign was created to encourage people to “hang up on” the status quo, break down barriers and embrace positivity, which embodies the flippable attribute of the razr phone. Those characteristics are also attributable to the couple, who live and love unapologetically.

We spoke to the starry-eyed husband and wife duo about why they chose to partake in the campaign, how they encourage one another and what they love about getting ready for big events together, like the Met Gala.

ESSENCE: What appealed to you about Motorola’s#HangUpOnIt campaign for razr?

Jodie Turner-Smith: What I really love about the campaign is this idea [of] hanging up on what’s not working for you. We are in this time where there’s so much stimulation from the outside–social media, so much content, the internet, a lot of different voices.

I love this idea of hanging up on that, being your authentic self and seeing your vision come to fruition. I feel like that’s where I’m at right now in my life. It felt really personal.

ESSENCE: What are you hanging up on as a couple?

Joshua Jackson: We’re hanging up on people’s expectations of what we’re supposed to do or be. Like so much of this stuff comes with parenting–in a way that has been both surprising and not–and you don’t need to listen to those voices. You just need to be present with your partner and present with your baby.

ESSENCE: What’s your favorite thing about getting ready together for shows like the Met Gala?

Turner-Smith: I love seeing him get all dolled up. I love it. I think he’s so sexy in a tuxedo, in a suit and I just love seeing him get pampered. It’s beautiful to see someone that you adore be adored. I want the whole world to see him the way that I see him.

Jackson: Well, for me it is an opportunity to watch my wife enjoying herself. And I love seeing Jodie’s joy—I love seeing how excited she gets by it and how it actually creatively inspires her. It is just a joy to be around that joy.

ESSENCE: What’s your favorite color or clothing item to see on one another?

Turner-Smith: I love when he wears green, okay. His eyes look so beautiful.

Jackson: Honestly my favorite thing that Jodi wears is nothing at all.

ESSENCE: How do you encourage one another as a couple when you’re faced with negativity and doubt?

Turner-Smith: Well, I can say how he encourages me when I have negativity and doubt, which is that he always tells me to be nice to myself. You know, he’s always there reminding me that what I need to do is be kind to myself and I just love that. It’s always this beautiful reminder that really grounds me and lets me see what is important and what is real. Also cuddles. Yeah. Lots of cuddles.

Jackson: Well, I think, I think that be nice to self thing is very key. There’s so much pressure and stress and strain in just being alive, whatever that means to each individual. And I think we forget oftentimes because we are–almost all of us–our own worst critic. I think we forget to be nice, to be kind, to find grace for ourselves.

And certainly I try to remind Jodie of [this] because she is so driven and so passionate and sometimes you just need to take a breath. I have never ever come across anybody, let alone been married to someone who encourages and meets me with grace wherever I am. It’s just the most beautiful thing to have someone really have you and hold you like that.