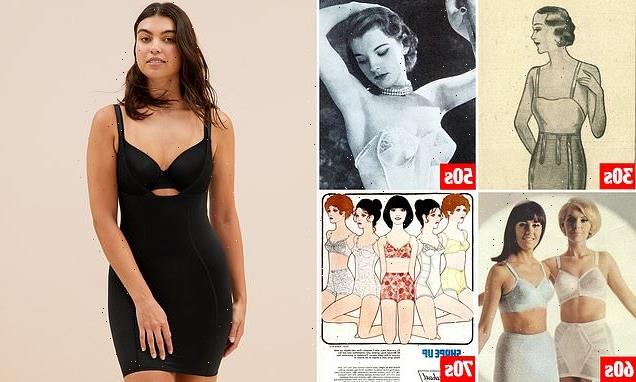 As M&S launches a new range to mark 90 years of control corsetry, why post-pandemic…It’s time to get back into shapewear

When someone asks me, ‘What size are you?’, I want to answer, ‘It depends on my underwear.’ If I’m wearing a Vivienne Westwood corset, my vital statistics are a sculpted and uplifted 35-25-35 and my stomach is flattened to oblivion.

But if I’m slobbing around my house braless, then it’s more like 32-27-35, with my breasts tumbling into my armpits.

Like most women I know, over my 54 years I’ve developed a complex, love-hate relationship with what we now call ‘shapewear’: the garments that squish and squeeze us to a trimmer version of ourselves without recourse to the gym or surgery. I adore the magic of having a whittled waist, uplifted bottom and youthful, pert breasts, but it can also sometimes seem like a tyranny. 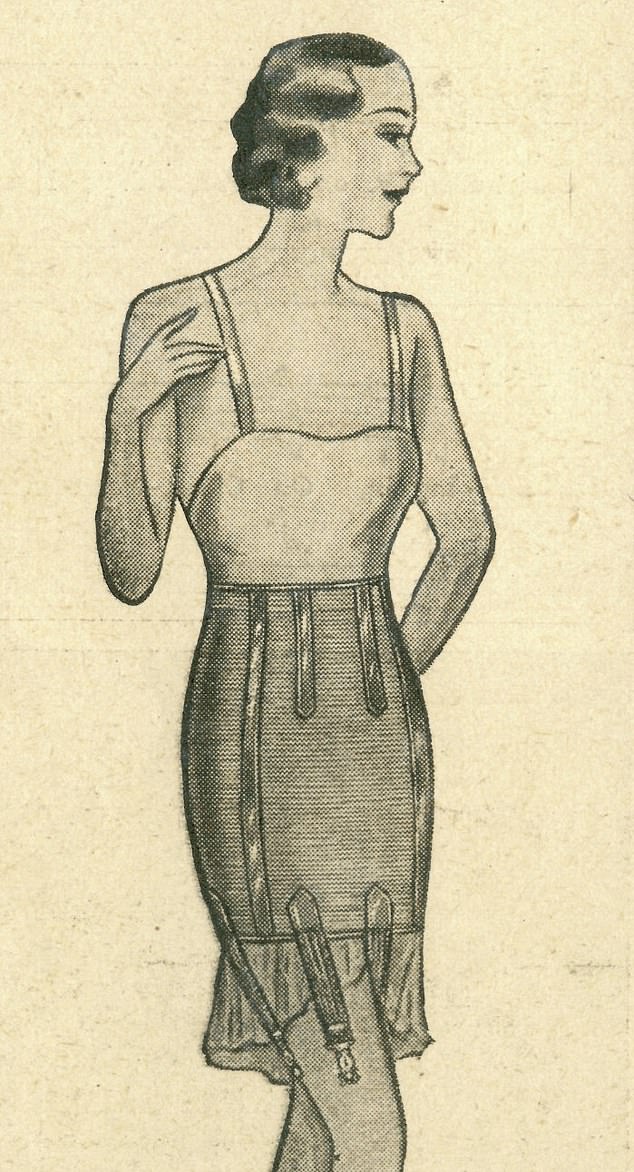 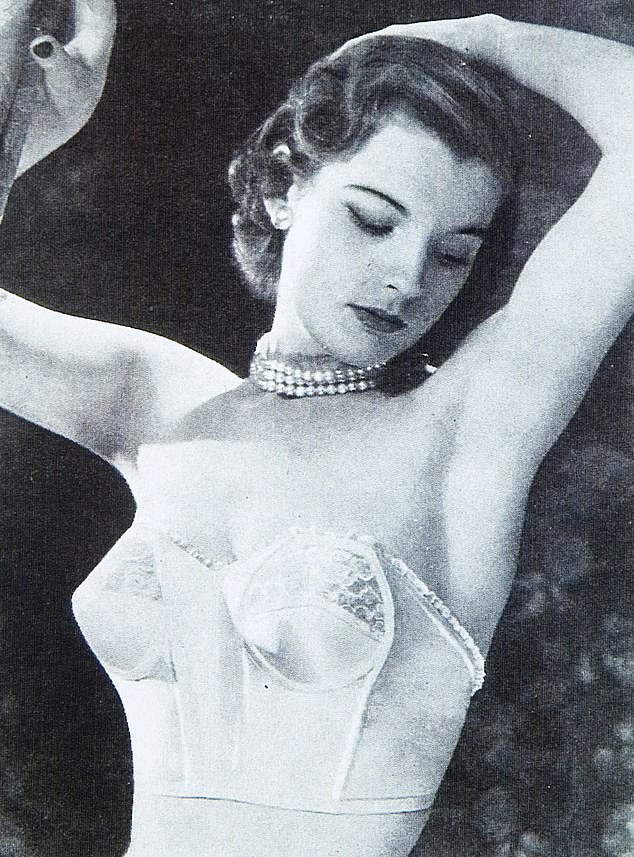 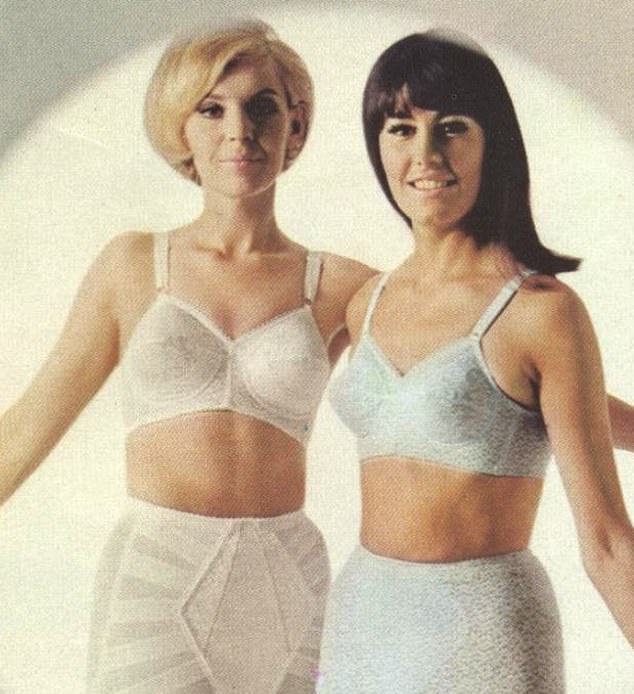 So when I learnt that Marks & Spencer is celebrating 90 years of shapewear this year, I didn’t know whether to bless or curse it. The store actually first started selling undies in 1926, albeit of a less constricting nature, as in the 1920s the trend was for boyish figures, not undulating curves.

But it wasn’t until 1932, when form-skimming bias-cut dresses became fashionable, that M&S started advertising its first body-shaping undergarments under the banner ‘St Michael corsetry’: girdles designed to cinch the waist and smooth the tummy. And by the end of the decade, they were promoting ‘new uplift brassieres’ with a slogan women still respond to like catnip, ‘A perfect figure guaranteed’. 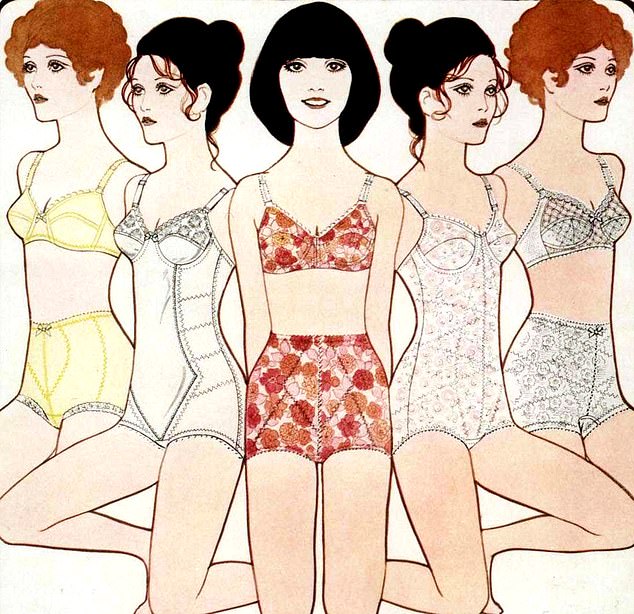 70s Relaxed control designs are added to the M&S range

Over the next nine decades, that cycle of alternating lingerie commands — ‘Truss-yourself-up!’ and ‘Now relax!’ — would become familiar to women of all sizes, shapes and ages, as we chased that perfect figure, then abandoned any pretence to it. The gamine pared-down 1960s, and let-it-all-hang-loose 1970s were swiftly followed by the ‘body-con’ fetish that typified the 1980s and 1990s. No scene in film history is more emblematic of the mystical hopes women pin on shapewear than when Renee Zellweger’s Bridget Jones dithers, as she dresses to seduce Hugh Grant’s Daniel Cleaver, between a gauzy black thong and huge control pants. 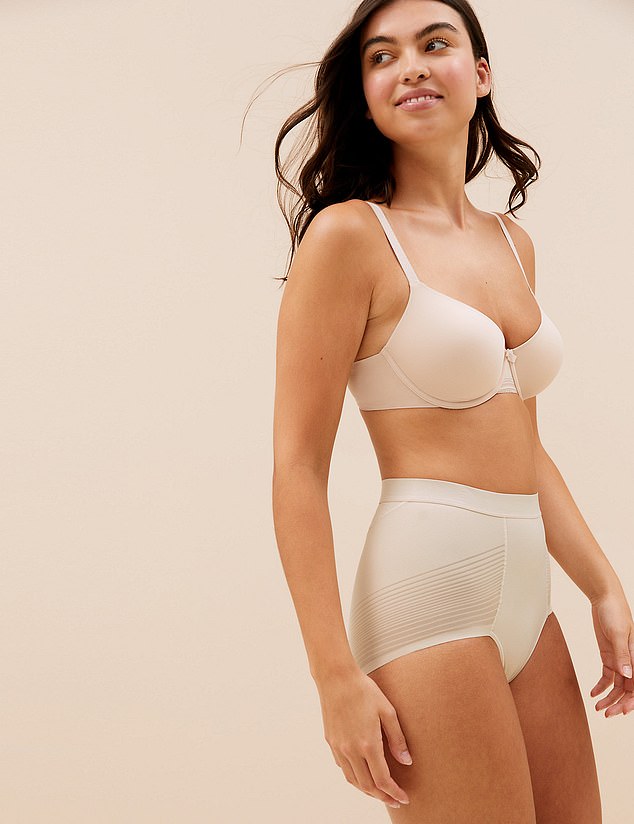 The advent of Spanx at the turn of the Millennium only worsened women’s quandary. On the one hand, these seam-light, elastane-enhanced undies offered miracle solutions, such as ‘no muffin top!’ and ‘smooth thighs!’. You could put on a silk slip-dress without every lump being cruelly revealed. But no one could claim they were alluring garments. The most versatile shade was a supposedly flesh-tone light beige that matched almost no one’s skin and made women look like unloved chicken fillets.

Thankfully, M&S’s new collection features a range of skin tones to choose from — beige, be gone! Colour aside, the worst thing was that high-waisted control pants could sometimes struggle to contain large tummies — unless you wore them right up to your bra line.

For these reasons, I’ve tended to opt for more 1940s’ or 1950s’ style underpinnings when dressing to impress. I prefer my shapewear with seams, under-wiring, whalebone, lace, bows, suspender straps and all the available trimmings. 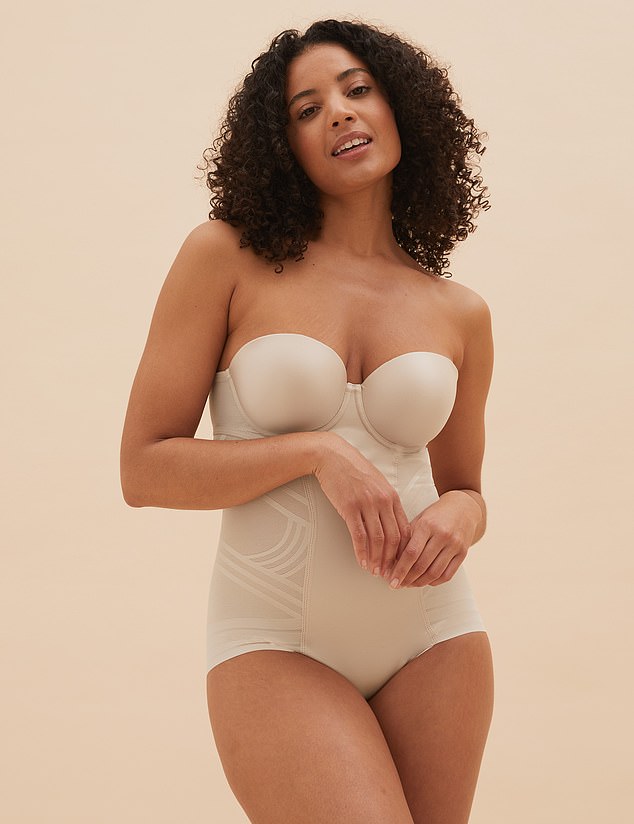 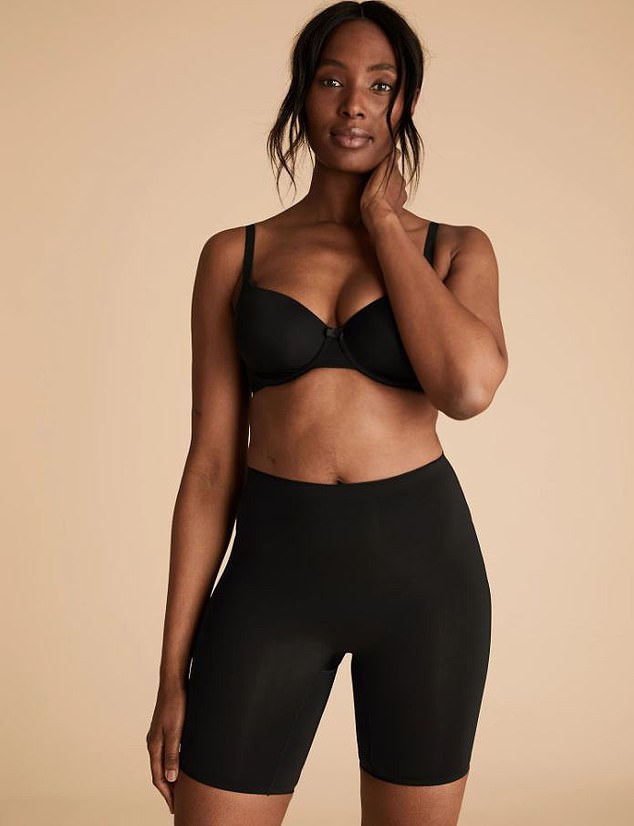 The flipside of these garments is that they can often feel like medieval torture instruments — I have a faint scar from a bit of corset boning that broke free from the fabric and dug into my hip.

In truth, the best compromise is clothes that do the shaping for you, without the need for shapewear. Remember the ‘King of Cling’ Azzedine Alaia bandage dress of the 1980s? A concept that was perfected by Herve Leger in the 1990s and worn on red carpets from here to Mars — but never more vampy than when donned by Cindy Crawford. 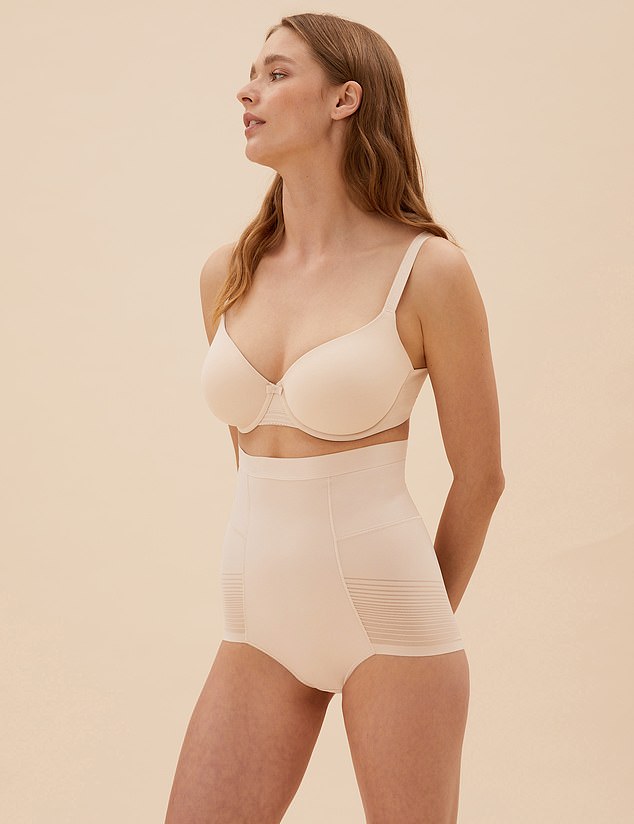 The Roland Mouret Galaxy dress performed similar magic in 2005 and was photographed on everyone from Dita von Teese to Carol Vorderman. Wearing shapewear can feel like girding oneself for battle — so thank God for the armistice that happened during 2020’s lockdown. For two years, the biggest trend in undies was comfort. Underwiring was out and thongs disappeared from sight. According to research from M&S, before the pandemic, around one in three customers were buying non-wired bras and bralettes — but by the middle of 2021, around half were seeking these kinder styles. The store’s head of lingerie and sleepwear design, Soozie Jenkins, noted a distinct increase in ‘lockdown sales of high-rise knickers and softer, non-wired bra styles’. 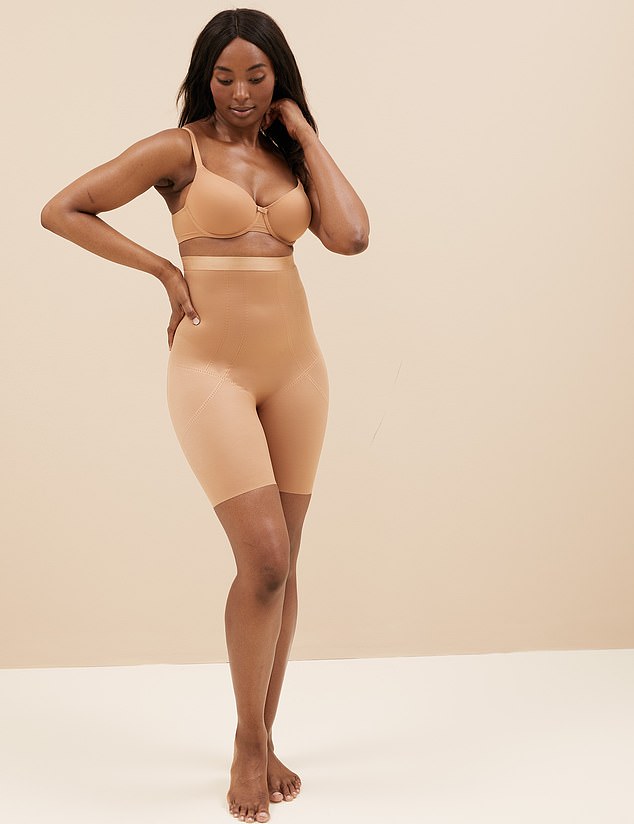 Meanwhile, sales at Kim Kardashian’s Skims, now the big rival to Spanx, continue to boom. Kardashian launched the brand in 2019 and you might have expected the pandemic to have made her wares redundant. But instead, Bloomberg News reported in January that the company had more than doubled its valuation to £2.4 billion from nine months ago, following a successful launch in China.

I can’t help wondering if a lot of women, like me, gained a few extra pounds while loafing around the house during lockdown — meaning they need a bit of Lycra to get into old work clothes.

With nearly a century of shapewear behind us, it seems that it will take more than a pandemic to end our lingerie-based quest for that ‘perfect body’. 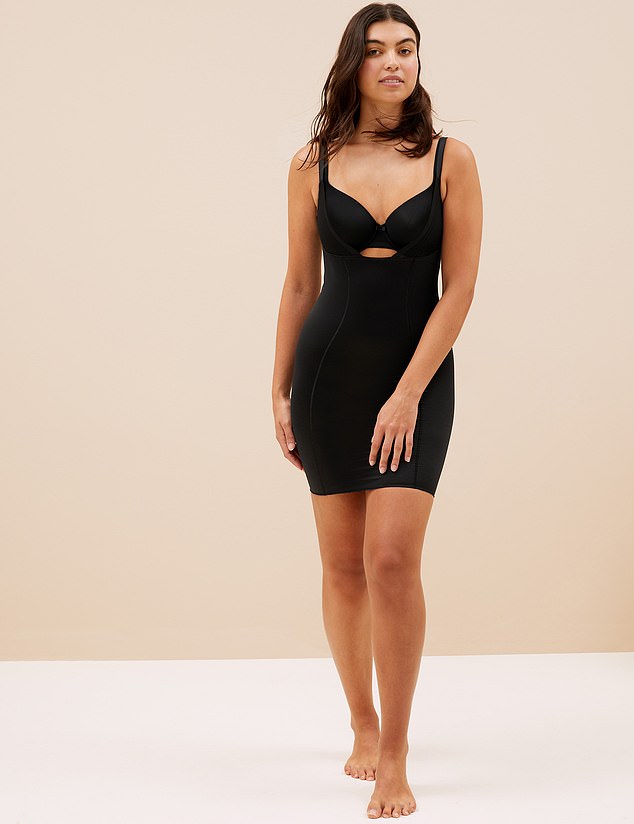