When Lucy Guerin started in contemporary dance, all the big-name choreographers were women: Martha Graham, Doris Humphrey, Pina Bausch and Isadora Duncan were trailblazers of the form.

Today, there are hardly any. Dance students are predominantly female, so their absence is even more shocking. “You can count them on two fingers,” says Guerin. “All the large companies are run by men. I’m like, how did that happen? I can’t understand it and I feel kind of really guilty. Why is that? Why hasn’t that been more addressed?” 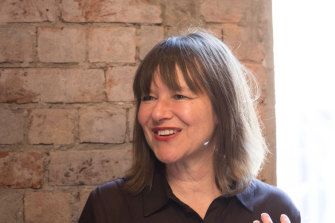 One of few women running their own company, she created Lucy Guerin Inc in 2002. Audiences have been wowed by her distinctive, powerful, minimalist performances ever since.

The menu offers several set courses and we opt for two. For her, it's West Australian scallops and beef flank, for me, chicken with kale, yuzu and pinenuts, followed by the hapuka. We share the fermented potato bread and have a glass of red wine each.

For as long as she can remember, Guerin has been interested in dance. It was inextricably linked with a fantasy image: that of the ballerina and beauty and performance.

As a child, she lived on a farm on the west coast of South Australia, surrounded by an austere yet beautiful landscape; a desert-like expanse. “I can remember being really attracted to anything that was pretty or colourful and I think that that was one of the things about dancing and the idea of costumes and … tutus. It’s kind of embarrassing now but I was really attracted to that because of this quite minimalist landscape next to the ocean.

“When I go back there now I think it’s stunning, it’s sunk into me a bit. It took a great amount of imagination to amuse myself as a child.”

Sitting at Embla’s younger sibling, a floor above the humming city, feels a long way from the Eyre Peninsula. “I can remember looking up at the one power line leading to our house, a little bird – a swallow I think it was – and spinning around and around, and the blue sky behind. It was kind of boredom but almost trancelike play,” she says.

In her later work, Guerin would see a connection to landscape and the detail of earth and stones, sticks and leaves, those simple things she used to play with.

“My mother used to have a pair of pointe shoes from when she did a little dancing – old ones made of wood in the dress-ups box. I used to teeter around on them.”

Growing up, Guerin did ballet classes for many years but as a teenager, she dropped it. Only after secondary school did she return to dancing. At that point, a career in the field was far from her mind – through her gap year journalism was beckoning, “but I got really pulled back in”. 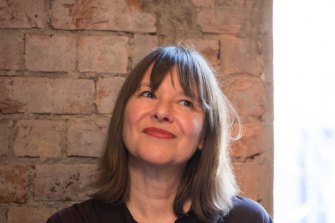 She joined a dance school in Adelaide, then studied at the Centre for Performing Arts. A much-loved teacher, Rex Reed, formerly with the Australian Ballet, suggested she apply and to this day she’s grateful to him. “It took me a long time to entertain it as a serious career choice … I didn’t know anything about contemporary dance.”

We’re dining ahead of her work Split at the Melbourne Festival, which premiered two years ago as part of Dance Massive. It’s the most successful work she’s ever made and has been staged more than 70 times, having toured to Asia and Europe, and set to travel to London and Canada.

“I do enjoy works that are very specific and minimalistic. I chose two aspects of what I had been working on that were kind of opposing in a way, one more abstract physical dance material and then this other material that was hyper-dramatic, almost mimey … kind of grotesque, almost horrific, and then I juxtaposed them, one in the big space, one in the smaller. It’s that thing that you don’t always know what’s going to result. It’s quite scary and intense by the end, being compressed into a corner. There’s this sense of duality with the dancers, which you could very much see as different sides of the one person. One of the dancers is clothed, the other is naked.” 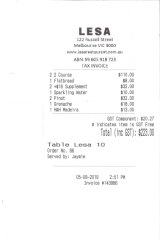 The bill for lunch with Lucy Guerin.

Responses to the show have been incredible. She says there’s something about it that people can relate to – for some, it has brought to the fore a personal trauma, others have seen relationships mirrored in the work.

As a practitioner, Guerin is aware contemporary dance can be challenging. It’s a different form, more aligned to music or poetry or the visual arts. “Ballet in a way tells a story but contemporary dance often doesn’t deal with a narrative … There are definite things you are trying to get across as a choreographer, which might be thematic, more about the human body and its potential, its status. For audiences, there’s a very complex range of things you can read from it. That’s one of the great things about it for me, that there’s a multiplicity of meanings. Not always – some things are very clear content wise, but there’s an ambiguity there that allows you space as a viewer to use your own experience and history to bring your perceptions to what it is.” 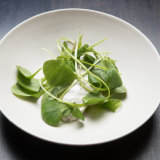 Our meals arrive, beautifully plated. Guerin notes that they’re like food art. In her downtime, she loves to cook and entertain, as do many choreographers and dancers. “Partially because it’s something you can do reasonably quickly and it has a finite outcome. Choreography and dancing is very hard to pin down.”

She lives near Melbourne's Queen Victoria Market and is a regular visitor, and seeking out markets around the world is a joy. “It almost makes me cry sometimes, I find it quite moving to see … I don’t know what it is, really. It’s a very human and very cultural thing, and how food is really essential to keep alive, but it’s the social aspect of food I find very engaging. You eat something delicious – exactly like this – you spend time with people.”

She also enjoys trying different cuisines when she's on tour.

Unlike theatre, where the director might attend opening night and maybe one or two other performances, Guerin tries to see every show. “Dancers really need to have a dialogue with the choreographer, discussing the show and keeping it alive.”

In her late 20s, she went to New York and opened her own studio, allowing her to immerse herself in a world of dance: observing, learning, fine-tuning.

“You’ve got a lot more examples and role models but also there’s a certain obscurity. That was really helpful. That’s where I found what I had to offer to a choreographic practice because I didn’t feel like anyone was watching.”

It was liberating. As well as immersing herself in the art, that time revealed different models for the performing arts, not least of which was how to make them financially viable. 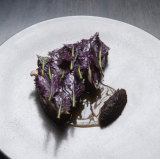 As adults, many of us stop dancing – weddings and occasional dalliances aside. Guerin believes that’s a real shame. “You see very little kids who will just dance. It feels like something intrinsic and something that is very deep in our DNA. I don’t know if it's that adolescent period, you become a bit more self-conscious and self–observational."

Seven years ago, she made a landmark work called Untrained, featuring two highly trained dancers and two amateurs. “It was really a work about how training affects our bodies, about what the trained dancer loses in a way, and what is significant about each.”

When the audience laughed out loud at the performance, she was shocked and a little bit horrified. "For me it was a very dry experiment … these four people are going to cross the stage and then they’re going to do a pirouette.” 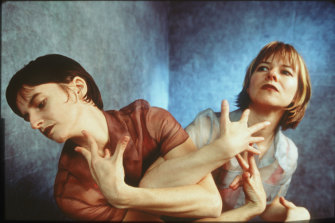 Ros Warby and Lucy Guerin in Return Ticket in 1997.

By the end of the show, the audience was cheering for the untrained, who were learning new moves, attempting really complicated actions; they ended up being the heroes of the show.

“It was kind of an interesting lesson in a way," Guerin says. "It’s not just about how good you are or how perfectly you can do something but how you go about it and how you give yourself to it.”

Split is at the Melbourne Festival from October 2-6. festival.melbourne.