Junior cricket games and adventure camps have been cancelled and one school has shut early for Christmas as a result of the COVID-19 spread among children, with too few teachers to keep classrooms open.

Restrictions wound back further this week but the number of children and teachers exposed to positive cases – with a total of 1510 new infections on Friday – meant sport, school and events were cancelled due to fears of widespread transmission. 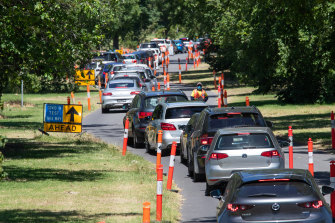 Alphington Primary School was closed on Friday, the last school day of the year, after a grade 5 teacher tested positive having attended school and grade 6 graduations this week.

There were too few staff left to keep the school running while teachers were tested for COVID-19, principal Melissa Mackenzie said.

“We are saddened to end the year this way and wish everyone a safe and restful break,” Ms Mackenzie said.

Children are unlikely to become seriously ill with COVID-19, but while 92.4 per cent of people over the age of 12 have had two doses of a vaccine, children aged 11 and under are so far unable to receive a jab leading to repeated outbreaks at schools.

Of the 61 major outbreaks in Victoria listed by the Department of Health, 43 clusters are at primary schools. Children under the age of nine make up the largest age group of infections.

The biggest cluster in the state, with 47 cases of COVID-19, stems from a school camp at PGL Adventure in South Gippsland, overlooking Wilsons Promontory.

She said five of the cases were among staff while the rest of the infections were among students and staff from two schools that visited the camp last week.

Another school group was turned away this week as a result of the outbreak and Ms Cockroft has cancelled a private booking over Christmas due to fears they will not have enough staff to open, with 11 staff deemed close contacts.

The Eastern Cricket Association was also forced to cancel junior matches this weekend because of clusters of cases at schools in the eastern suburbs.

“This situation has come about due to the abnormal number of players having to test and isolate due to being close contacts in a school environment and therefore a number of clubs and teams being affected,” the association’s president Richard Barker said.

“Given that most of the junior players are attending school at this time and the potential for undetected or unknown contacts the junior executive made the decision not to proceed with matches so close to Christmas and holidays.”

Mr Barker told The Age at least 10 junior clubs had contacted the association which became “collateral damage” of primary school outbreaks. Senior clubs did not have the same issue, and he was confident of resuming the season in January.

Andrew Dalgleish, president of the Victorian Principals Association, said he was aware of parents testing positive after attending school concerts this week and knew of one school where just one-third of students were in class as a result of exposures.

Some parents had taken children out of school this week to protect holiday plans, he said, and teachers had also reported fears they would be exposed ahead of Christmas Day.

Mr Dalgleish was hopeful that children under 12 would begin vaccinations early next year and receive their second doses by the end of term 1.

“We hope to get to 2022 with less disruption and a little more consistency and understanding that we’re not living on the edge all the time.”