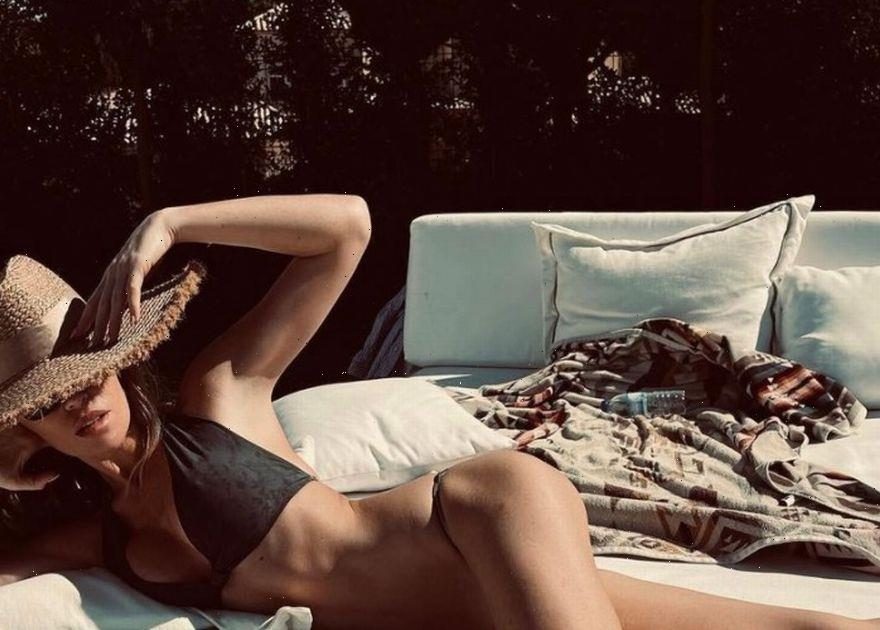 Abbey Clancy has given a glimpse inside her sun-soaked family getaway with her stunning lookalike sister Elle.

The model, 35, who recently revealed that her former footballer husbandPeter Crouchsleeps on floor as their kids take up bed, shared a sneak peek inside the luxurious holiday with her 516,000 Instagram followers.

The gorgeous blonde sprawled on the day bed and gave a glimpse of her washboard abs as she donned a black triangle bikini for the day of relaxation by the pool.

Complementing her look with oversized sunglasses and a straw hat atop her sea-salt tresses, Abbey captioned the snap: "Wear your factor folks."

Mum-of-four Abbey was also joined by her sister Elle, 24, who is a hairdresser at Larry King in Notting Hill, London, as well as a stylist for fashion shoots, and the pair wasted no time in posing up a storm for Instagram.

Elle worked the camera in a zebra-print bikini while her older sister Abbey could be seen fooling around in a shoulder stand behind her.

Taking a closer look, the stunning villa features a turquoise pool and an outside kitchen area has a huge bar area, large TV and a plush cream sofa to enjoy shade from the sun.

Captioning the snap to her 12,400 Instagram followers, she penned: "There’s 2 types of sisters … this is mine."

The pair also shared footage on a golf buggy as Elle joked: "Anyone else go the gym and then demolish a cheese toastie?"

Turning to her sister, Abbey added: "We do!"

Elle also filmed her adorable nephew Johnny with his armbands on as he made his way over to take a dip in the pool.

It comes after Abbey revealed that her footballer-turned podcast host husband Peter sleeps on a separate single mattress on the floor while three of their four children share their bed.

The beauty opened up on some of the challenges they face as a large family during her first ever appearance on ITV lunchtime programme Loose Women in September.

Admitting their sleeping arrangements were a situation that wouldn't work for "most people," Abbey explained the details to the presenting panel.

“I had two cots in the bedroom for Johnny, [three], and Jack [two]," the celebrity personality said. "Now Jack’s in his own bedroom – Liberty, [six], sleeps in with us and Johnny.

“We’ve had to put a single mattress on the floor next to the bed, so in the middle of the night Pete sleeps on that, but his head and feet are on the floor.

“I kind of like it in a weird way," Abbey laughed, but added that her 10 year old daughter Sophia doesn’t "come in anymore".