Inner Melbourne is projected to lose 79,000 jobs annually and bleed more than $110 billion in revenue over the next five years as the COVID-19 recession savages the central city.

New modelling predicts the Andrews government's decision last month to move from stage three to stage four restrictions will cost the city's economy $61 billion over five years – although the modelling did not take into account the economic or health impacts of a worsening pandemic.

Job losses across Victoria have already far eclipsed the height of the 1990s recession and are projected to hit almost 400,000 annually over five years. 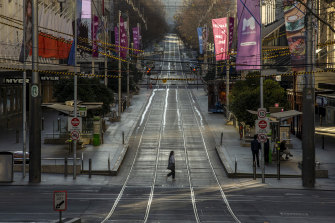 With people deserting the CBD, inner Melbourne is expected to bear the brunt of Victoria’s economic pain.Credit:Wayne Taylor

Accounting giant PwC conducted modelling for the City of Melbourne and the Victorian government, showing the economic effects of the pandemic on inner Melbourne will be far worse than the 1990s recession – equivalent to the combined impacts on the city of World War I and the Spanish Flu pandemic.

Inner Melbourne is expected to bear the brunt of Victoria's economic pain, with the City of Melbourne accounting for almost one-quarter of the state's economic output.

It predicts the City of Melbourne's economy will contract by up to $23.5 billion this year – or 22 per cent of forecasted growth.

PwC conducted its modelling amid a shifting pandemic and soaring coronavirus case numbers. According to two scenarios presented in its full report, if Melbourne stayed in stage three restrictions the City of Melbourne would have faced a $49 billion shortfall in projected revenue over five years. Once metropolitan Melbourne moved to stage four restrictions, that projection ballooned to $110 billion in lost revenue.

Australian Venue Co chief executive Paul Waterson, who owns 42 Victorian hospitality venues, said his company would invest $30 million in refurbishing pubs in Queensland, but he predicted businesses would take an extremely cautious approach to capital allocation in Melbourne for some time.

"You tend to invest where you're going to get more certainty of the outcome, and unfortunately that's not the Melbourne CBD at the moment," he said. 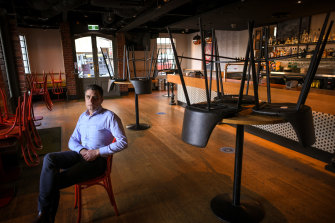 Mr Waterson believes people will stay away from the CBD even as metropolitan Melbourne emerges from lockdown in coming months.

"When we were open [after the first lockdown], many of the suburban venues were within about 15 to 20 per cent of what their normal revenue would be, and I think that was primarily because people were working at home. But the city venues remained 60 to 65 per cent down. So there's a real two-speed recovery in Victoria."

"Melbourne was the economic powerhouse of Australia [and] the scale of the economic shock being felt across the central city is unprecedented," she said. "This new data shows that Melbourne needs urgent support from the Victorian and Australian governments to support businesses and restore our marvellous Melbourne."

Almost 128,000 jobs were lost in April across the state – more than three times the 38,000 lost in March 1991 (the largest single-month job reduction in Victoria in that recession).

The PwC modelling predicts 22,900 jobs will be lost in Melbourne's accommodation and food services sectors alone this year, equivalent to $1.99 billion in forgone revenue.

Under the government's plan to leave lockdown, hospitality businesses will be able to reopen for limited dining and retail businesses will reopen from October 26 if the 14-day COVID-19 case average has fallen to five or fewer, with no more than five cases of an unknown origin.

A spokesman said the Andrews government had already announced more than $10 billion in assistance for businesses, workers and families, and hinted there was more to come.

"There’s no escaping the steep economic costs of coronavirus. This is the case right around the world, and Victoria is not immune," he said. "We are carefully considering what further economic support measures are necessary and we will have more to say in due course."

"Restrictions have hit CBD retailers like a sledgehammer, and they have felt the pressure more than other locations under the weight of lost foot traffic and elevated rents," he said.

"We are calling on the Victorian government to reconsider the staged reopening timelines for retail given its exemplary safety performance, and to identify more realistic daily caseload targets. As our understanding of the virus improves globally, it is increasingly clear we are now living with COVID and an elimination strategy is unlikely for many years."

PwC's research shows the higher education sector – highly reliant on international students – has already lost 6800 jobs in Victoria, equivalent to 25 per cent of the workforce.

It says that for every dollar lost in higher education fees, an additional $1.15 is lost to the broader economy from student spending.

Tourism is another sector in which revenue all but dried up overnight: PwC says that in the year to March, 9.5 million international and domestic visitors flocked to Victoria. Those tourists spent $31.3 billion, equivalent to about $85.6 million each day, with greater Melbourne drawing almost 40 per cent of the visitors.

The PwC modelling assumes a slow economic recovery from the pandemic and public health measures being in place into next year.