As new Greens MP Stephen Bates stood up to deliver his first speech in federal parliament late Wednesday afternoon, he recognised the symbolism went well beyond the rainbow-coloured “bin chicken” over his left breast.

Bates, 29, prevailed in a three-way contest between the Greens, the LNP and Labor in the inner-city seat of Brisbane in May, giving the party its third lower house seat in Queensland, and fourth overall. 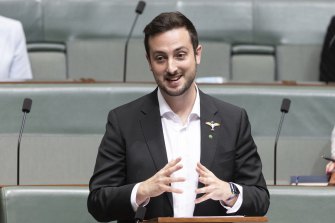 It was the icing on the cake for the party, which had already claimed Ryan from the LNP’s Julian Simmonds and Griffith from Labor’s Terri Butler, prompting some to bestow the “Greensland” moniker on the Sunshine State.

“There have been two pivotal moments for me that have shaped who I am and my politics,” Bates said in his emotional first speech to the House of Representatives on Wednesday afternoon.

“My experiences of working poverty-wage jobs, and my coming out as gay. Both impacted me deeply and forever changed how I saw the world.”

While Bates is no trailblazer in that latter regard, his election did make some minor Australian political history.

For the first time, an openly gay MP (the LNP’s Trevor Evans) was replaced in the House of Representatives by another openly gay MP.

“I spent much of my teenage years knowing I was gay and doing everything I could to hide it,” Bates said.

Bates then paused, as he struggled to go on.

“I was lucky enough to have a very supportive family to come out to, but I spent years hiding myself because I could not see anyone in my world that was openly gay.”

“This is so much harder that I thought it would be.”

Timing in politics, as in sport, is everything. As Bates stood up to speak in the chamber, the sporting world grappled with the fallout from the Manly pride jersey controversy.

Proudly wearing a rainbow “bin chicken” badge, designed by local designer Jesse Irwin and celebrating the ibis so prevalent in Brisbane, Bates told the House how important such representation was to the queer community. 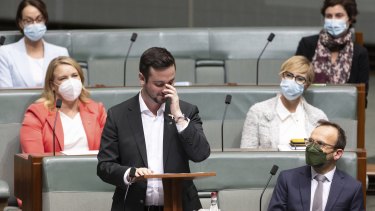 Stephen Bates: ‘This is so much harder that I thought it would be.’Credit:Alex Ellinghausen

“I made a promise to myself once I came out that if I ever found myself in a public role that I would be open and proud of who I am — hence all the rainbow gear,” he said.

“That I would be that person that I never saw growing up because if I can even help one person
out there then this life will have all been worth it.

“I was lucky enough during the campaign to have received an email from a mother who told me
that after receiving a letter from me in her mailbox that just happened to mention my partner Scott’s name.

“Her 14-year-old son wanted to donate some of his pocket money to our campaign. When she asked him why, he said he had read the letter and wanted me to win.

“It is not enough to wave a rainbow flag when it is politically convenient. Our community deserves tangible legislation that protects us from discrimination, and empowers us to be who we are.”

Bates also drew on his experience working at Disney World in the United States.

“The pay was very low and the hours would be long, but it was an offer I did not want to refuse,” he said.

“I had no idea just how much my life was going to change. I worked over 40 hours a week for $7.56 an hour — the federal minimum wage.

“But it was not just the overseas workers on these poverty wages, it was the locals as well. Once we had paid bills, rent, and health insurance, we were left with nothing and sometimes even less than that.

“The immense power imbalance between us as workers and this giant company was staggering.
I was a disposable pawn, and that was made very clear to me.”

Bates said things “came to a head” for him when he found a colleague crying on the floor in a stockroom.

“I asked her what had happened, what was wrong? She was having to make the decision between whether she paid her rent or bought her insulin for the month,” he said.

“That was a choice. Life-saving medicine, or a roof over your head.

“It all hit me at once, this is not a society that puts people first. It values profit above all else. I could not allow that to happen back home.”

It was that experience, in part, that Bates become an active member of the Retail and Fast Food Workers Union upon his return to Australia, where he worked in retail up until his election to parliament.

The arts, also, were close to Bates’s heart.

“Without the arts and culture, what have we to defend?” he told the House.

“I am exceptionally lucky to represent a part of this nation that enjoys a vibrant community of artists.

“From the Powerhouse in New Farm, to the festivals of Fortitude Valley, and beyond, we are so lucky to have a passionate and inclusive arts scene that I will support with every fibre of my being to make even bigger.”

Queensland’s other new Greens MPs, Elizabeth Watson-Brown (Ryan) and Max Chandler-Mather (Griffith), along with Senator Penny Allman-Payne, will deliver their first speeches later this week and next.