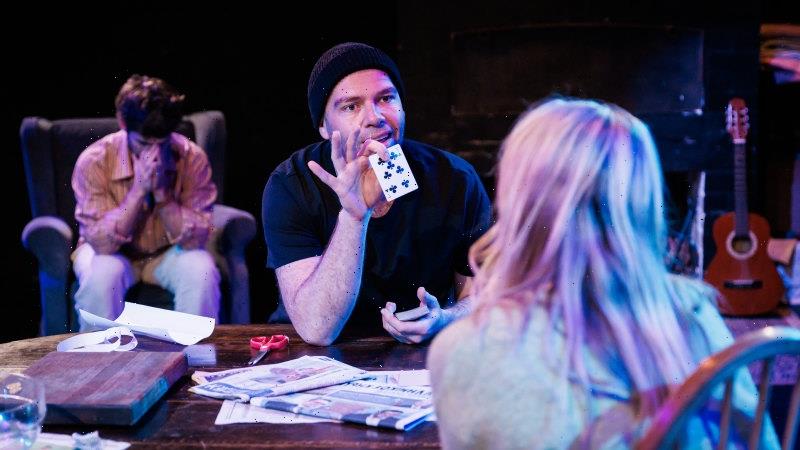 This wrap of reviews for shows around Melbourne includes a play that takes you through a labyrinth of possible relationships, a sold-out show by musician beabadoobee and a performance that is a “gift to audiences from our greatest Shakespearean actor”.

Caryl Churchill’s 1976 play Traps was written before she achieved mainstage success with Cloud Nine and Top Girls, and well before she became arguably Britain’s most highly regarded living dramatist. It’s immensely heartening to see it staged at all, much more so with a cast of actors whose stars are so clearly on the rise. 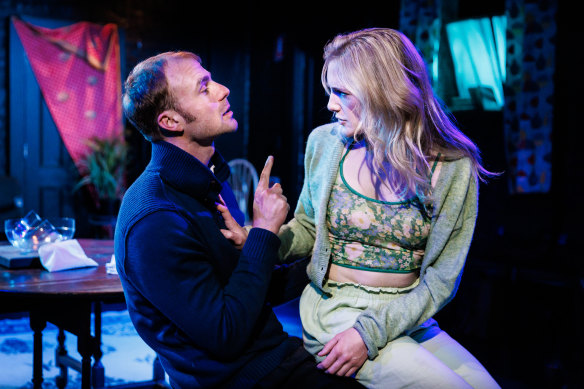 Trying to make sense of this puzzle-like play is a challenge for performers and critics alike. Churchill portrays characters and situations that seem all too real and yet are impossible to rationally reconcile, creating an experience that will baffle and disorient anyone wedded to naturalistic modes of performance, while emanating a disturbing familiarity.

It might be best interpreted as an exploration, with strong socialist and feminist overtones, of how lives and identities can be circumscribed by narrative logic, by life-denying forces seemingly beyond one’s control.

From the outset, we’re confronted by contradiction. We appear to be watching a working-class couple, Syl (Meg Spencer) and Jack (Scott Middleton) with a new baby, but our assumption is upended with the arrival of Albert (Leigh Scully), who asserts that he is Syl’s husband and father to her child, before denying those facts in the same scene. 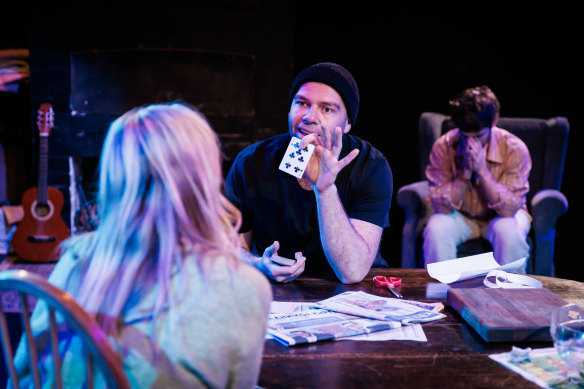 Traps is a labyrinth of possible relationships.Credit:Darren Gill

The trio is joined in turn by Del (Dom Westacott), a former flatmate with a grudge, and by Jack’s sister Christie (Cait Spiker) who has run away from her abusive, wealthy husband Reg (Gabriel Partington).

Each entrance and exit will take a different twist into a labyrinth of possible relationships, and yet as the scenes warp and mutate from city life to some sort of enlightened commune in the countryside, there’s a stickiness of expectation that influences and constricts outcomes.

Gender is the most salient: Syl’s reality is continually drawn back into the idea of herself as a mother; Christie is stalked by her abuse; Del can’t shake masculine rage and violence (and in one shocking exchange, confesses to raping and murdering a woman); Jack persists in fantasies of power and control.

Impossibilities accumulate, even as possibilities constrict, until a weirdly levelling final scene in which the performers each strip naked, bathe onstage, and eat together.

Fearless and charismatic ensemble acting invests every moment of the performance with an emotional reality crucial to making the play – which defies ultimate coherence, whichever way you slice it – work. It’s easy to imagine a less-accomplished production turning audiences off theatre for life, but the cast here takes command of the stage, inhabiting this secular ghost story with disturbing, and ultimately hopeful, intensity.
Reviewed by Cameron Woodhead

Genre designations like “bedroom pop” and “dream pop” imply a sort of solitude, an image of an artist working away in isolation exploring their own little worlds, disconnected from the notion of an audience. 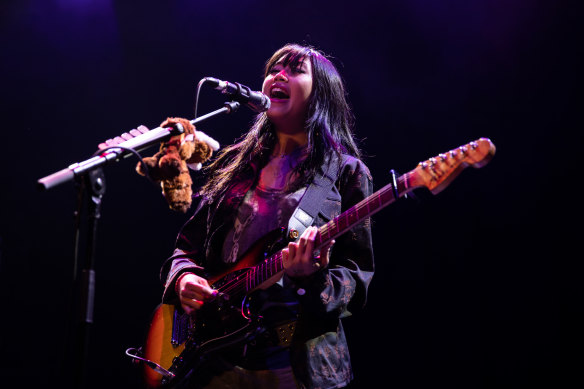 Beabadoobee live at The Forum in Melbourne on September 10, 2022.Credit:Nate Hill

Nothing could have been further from the truth for fans of beabadoobee – the professional name of 22-year-old Filipino-British singer-songwriter Beatrice Laus – playing to a sold-out Forum Theatre.

The crowd skewed heavily towards the younger end of the spectrum, and a good number of them might well have initially discovered beabadoobee’s music via the virality of her song Coffee on TikTok. If you’ve spent any time on that app you’ve probably seen videos of sleeping kitties and puppies accompanied by that song.

But this wasn’t a crowd who had come just to hear one track. This was an engaged, sing-every-word group who played along with the audience-interaction commands of the artist, crouching down for a quiet bit, springing up with an exuberant burst when the riff returned. Songs like He Gets Me So High, Last Day On Earth, Together and an absolutely crushing Cologne recalled ’90s alternative and indie energy filtered through a 21st century sensibility, while the more-subdued acoustic numbers provided balance and respite before the return of the rock. 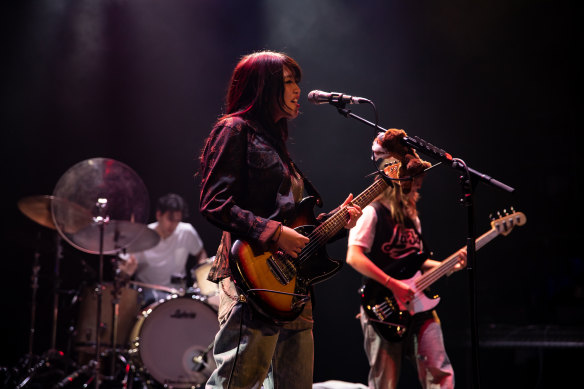 Beabadoobee at The Forum.Credit:Nate Hill

All this despite Beatrice battling illness, giving her all and not really dropping a note, even while admitting to having a difficult time onstage. If anything, that admission of vulnerability made the crowd more supportive, more on her side, cheering her on between songs and often overpowering the considerable oomph of the live band via sheer vocal volume.

With only two albums to call upon (2020’s Fake It Flowers and new release Beatopia), it wasn’t the longest show the Forum has ever hosted, but it was one of the most communal, and it spoke of bigger things from an artist still finding, but already confidently channelling, her considerable musical power.
Reviewed by Peter Hodgson

John Bell’s solo show One Man In His Time is a gift to audiences from our greatest Shakespearean actor. It was streamed online in an abridged version during pandemic lockdowns (as Bell notes, the Bard himself was no stranger to plague-time theatre closures) though there’s no substitute for witnessing it live, and we can only hope for return seasons in the future. 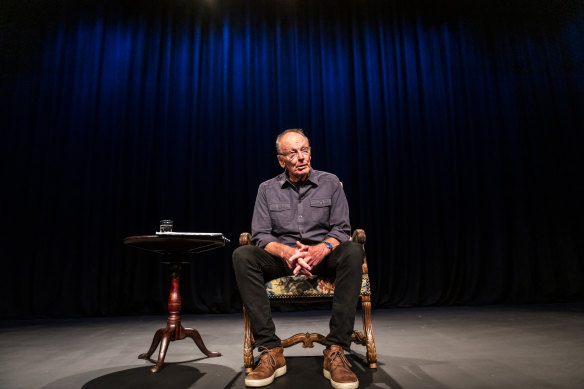 John Bell performs One Man In His Time. Credit:Brett Boardman

Onstage, Bell possesses the grace and authority of a life dedicated to theatrical service. His command of Shakespeare’s poetry and rhetoric is unparalleled in this country. I remember seeing him play Richard III 30 years ago, when I was a 15-year-old, and soon became as besotted by theatre as Bell was when he, obsessed by Laurence Olivier at the same age, first tackled the role of Hotspur in a high school production of Henry IV.

Age has not wearied the rebellious fire of Bell’s Hotspur, which features among the fine selection of scenes and soliloquies he performs in the show. But it is the other end of life that dominates – from the deep poignancy and affectionate humour he brings to Justice Shallow, an ancient country magistrate babbling helplessly about his youth, to the savagery of King Lear’s downfall and the halting insight it brings.

At the show I saw, the theme of mortality was further charged by circumstance. Bell took the stage on the day Queen Elizabeth II shuffled off this mortal coil, paying tribute to her after performing the agonised “hollow crown” monologue from Richard II.

Yet as Bell shows us with absolute histrionic clarity, behind Shakespeare’s many and various meditations on death stand timeless questions about how to live, from Hamlet’s soliloquy on suicide to the clipped nihilism of Macbeth on the meaningless of his existence.

The grand and melancholy “Seven Ages of Man” speech in As You Like It, from which the show takes its title, resounds with feeling coming from a performer nearing his final act – even though it’s delivered with a vitality that makes “second childishness and mere oblivion” seem a long way off.

And the excerpts are slyly chosen to show how contemporary Shakespeare can sound. Hamlet’s speech to the Player King could spring to the mouth of any theatre director on a bad day, while Shakespeare’s contribution to the collaborative play, Sir Thomas More, directly addresses the “mountainous inhumanity” of those who would deny haven to refugees.

Perhaps the one fault I detected was in the audience. It is, to put it bluntly, too old. This is the kind of Shakespearean performance – part acting masterclass, and part reflection on the philosophy the plays embody – that teenagers need to see to help keep the tradition alive.
Reviewed by Cameron Woodhead