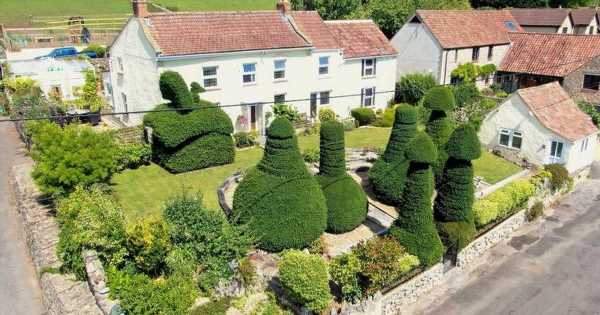 If you're on the hunt for a new property and you're looking for something rather unique, we may have just the place for you.

A five-bedroom home, nestling in the Somerset village of Cross is up for sale, and it has quite an eye-catching garden.

The property, which has been branded an "iconic landmark", boasts giant 'phallic' trees, which certainly capture people's attention.

The towering 200-year-old yew trees line the path to the front door and have been lovingly sculpted into giant phallic shapes which have caused locals to raise an eyebrow or two, according to SomersetLive.

A photo of the unusual front garden hit social media a few years ago, where the owner then joked that he put Viagra in the roots of the trees which bear a striking similarity to the male anatomy.

He also said that the property, which also comes with a paddock, stable block and tack room, had been known locally for years as the “Willy House”.

The property has now gone up for sale for the sum of £925,000 and is being marketed by agents Cooper and Tanner of Cheddar.

In the online listing, the company said: "The impressive topiary trees in the landscaped front garden are a unique landmark in this rural community. They create a striking vision and frame the path to the front door."

It continues: "The stunning 200-year-old topiary yew trees adorning the front garden, and the elegant pale-yellow façade belies a welcoming interior with old ‘farmhouse’ warmth and charm and a plethora of original features."

As well as the trees, the impressive 17th century country residence does also boasts many other great features.

These include a recessed fireplace and cast-iron stove in the reception hall with a secret staircase hidden behind stripped pine doors.

Meanwhile, the dining room – which was once a cow stall – has original flagstone flooring and a range of hand-built units and an aga stove graces the beautiful kitchen.

The property also comes with two separate annexes – one attached to the main residence and the other forming a separate one-bedroom cottage situated in the shadow of the yew trees in the front garden, which is ideal for a potential AirBnB.

The rear of the property features stunning hillside views, and as well as the paddock and stables there is a further stone outbuilding, paved patio area, pond and waterfall, detached conservatory, vegetable garden, a chicken run and a secret garden.

So with all that, and the neatly trimmed bushes, you certainly get a lot for your money!

For further details and information on the sale contact agents Cooper and Tanner on 01934 282724.