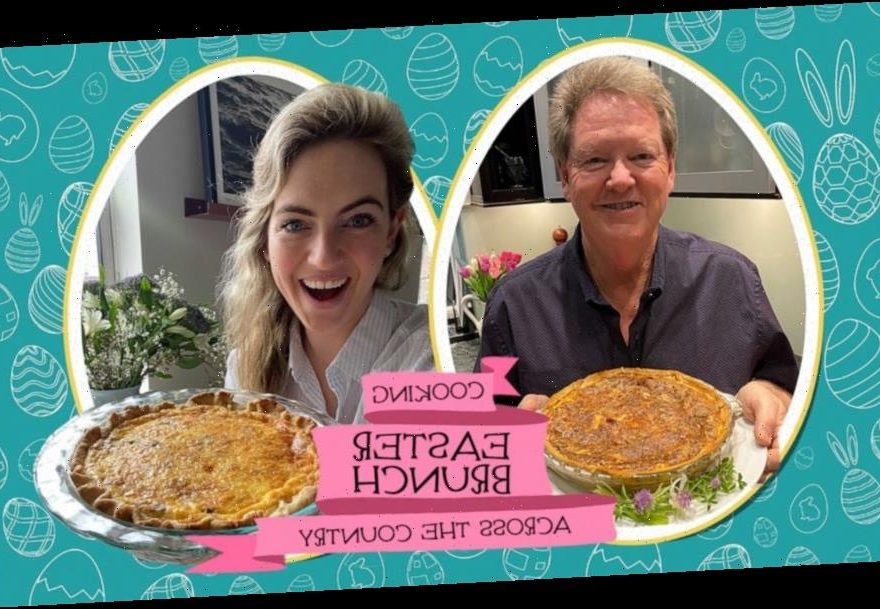 To me, Easter brunch would not be complete without one signature dish on the table — my dad’s quiche Lorraine.

This dish is a classic in our family for good reason: a perfectly tender, flaky, buttery crust cradling the creamy egg custard center with ribbons of melty Gruyère cheese, sweet onions and bacon all seamlessly sprinkled throughout every bite. And although I’m no baker, I had to try my hand at it.

“It’s good to have the bacon a little on the crispy side, because it soaks in the custard and absorbs some of the liquid,” he suggested. As for the spice upgrade, he said to add a pinch of paprika because “you can barely taste it, but you know it’s there and because it’s so rich — it seems to be a good balance.”

Taking a page from my dad’s mise en place book, I shredded the Gruyère, grated my onions and cooked the bacon, then placed the ingredients in individual containers overnight in the fridge.

We both used a standard glass Pyrex pie pan, he prepped with a light spray of canola oil while I went big with a smear of salted butter.

Next, we assembled the quiche — both going for a store-bought pie dough crust. Mine was from Trader Joe’s while his was from Kroger, which ultimately put me a touch over the edge in taste (see scorecard below). Dan layered his filling inside the dough and repeated the process three times, whereas I sprinkled all the bacon first, then onion and finally cheese before pouring in the egg mixture.

My dad has the luxury of a convection oven, plus prefers a more caramelized top and well-done texture, so he opted for 425 degrees on convection for 25 minutes then reduced the heat to 300 for up to 40 more minutes. My New York City oven is just good enough to turn on (most days) so I let the thermometer rise to 425 degrees and cooked it for 15 minutes, then reduced the heat to 300 degrees for another 30 minutes.

Both bakes resulted in a souffle-like puff, crispy edges and a buttery, bacon aroma that I hope never dissipates.

“Mom told me to give myself a 7 on execution instead of 10,” he said bluntly. “Because it was a little on the overcooked side, but not for me because I like the crust on top. I also wasn’t meticulous on the measuring. Like you I kinda freewheel it, ’cause I know and I’ve done it.”

As far as flavor goes, he gave himself an 8 — “only because I didn’t like the brand of crust as well.”

For presentation, with an assist from my mom and her garden, the plating got a leg up with fresh chive blossoms and beautiful garnishes: 10 out of 10.

As for my own — taste I can’t give myself a 10, since I didn’t make the crust, but every flavor was on point and I will actively stop myself from eating the whole thing by myself.

My parents also won in the unmentioned pairing category.

“Bubbly makes everything better and I don’t know of a better pairing than either a blanc de noir or a brut rose [champagne]. It’s just beautiful with that dish,” he suggested for anyone in the over-21 crowd.

Check out my dad’s full “quiche-ster” recipe below

“I like to make multiple. It’s really easy to make two as long as you’re making one. So I’ll cook two, pull one out a little bit early for freezing for a fresh cook,” he said. “Oftentimes it never makes it to the freezer with our crowd, but if it does, great!”