Britney Spears is back. The pop icon has just dropped her first new song since 2016, a joyful dance version of Tiny Dancer made in collaboration with Elton John.

Titled Hold Me Closer, the track came about after Spears professed her love for the 1971 ballad on Twitter back in 2015. John created the remix with producer Andrew Watt and then, after a suggestion from his husband David Furnish, the 75-year-old singer reached out to Spears this year to work on the vocals together.

John has praised Spears as “one of the all-time great pop stars” upon the song’s release. 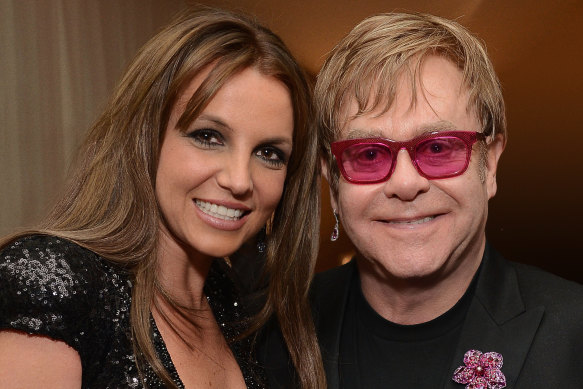 “I am absolutely thrilled to have had the chance to work with Britney Spears,” he said. “She truly is an icon … and [I’m] delighted with what we’ve created together.”

This is one in a string of many recent collaborations for Elton John. When his Farewell Yellow Brick Road tour was paused due to the pandemic, he started working with a number of diverse musicians (from Nicki Minaj to Eddie Vedder to Lil Nas X) to produce The Lockdown Sessions, a playful and unexpected album released in October 2021.

The lead single of that album was Cold Heart – a hugely successful mashup of his songs Rocket Man, Sacrifice, Kiss the Bride and Where’s the Shoorah? produced by Australian dance act Pnau and performed with Dua Lipa.

In a similar vein, this new release takes elements from not just Tiny Dancer but also The One and Don’t Go Breaking My Heart.

The song is much more notable, however, for Britney Spears – who hasn’t released new music since her 2016 album Glory. The intervening years have been life-changing for the singer, with the emergence of the #FreeBritney campaign and the eventual termination of the 13-year conservatorship she was subject to in November 2021.

This legal arrangement, which had been in place since 2008, stripped Spears of her ability to make decisions about her career, finances and personal life – to the point that her requests to have her IUD removed were denied, despite her desire to have another child.

When the conservatorship was terminated, Spears thanked her supporters for their support and advocacy. “My voice was muted and threatened for so long,” she said. “I honestly think you guys saved my life.”

In that broader context, Hold Me Closer feels like a celebration; a sign the singer is chasing her passions and finding her groove again.

“It’s pretty damn cool that I’m singing with one of the most classic men of our time,” Spears wrote on Twitter. “I’m kinda overwhelmed… it’s a big deal to me!!! I’m meditating more and learning my space is valuable and precious!!!

“I’m learning every day is a clean slate to try and be a better person and do what makes me happy… yes, I choose happiness today. I tell myself every day to let go of the hurt, bitterness and try to forgive myself and others to what may have been hurtful.

“I want to be fearless like when I was younger … I choose happiness and joy today.”

Speaking to The Guardian, producer Andrew Watt praised the artist for her exacting standards and professionalism in the studio: “She was really collaborative and had really good ideas about the production. She’s an expert in music to make you dance.”

However, John added that she still felt apprehensive about releasing the track.

“There’s a lot of fear there because she’s been betrayed so many times and she hasn’t really been in the public eye officially for so long,” he said. “We’ve been holding her hand through the whole process, reassuring her that everything’s gonna be alright.”

“I’m so excited to be able to do it with her because if it is a big hit, and I think it may be, it will give her so much more confidence than she’s got already and she will realise that people actually love her and care for her and want her to be happy.”