A brutally honest mother doesn’t hold back when it comes to her daughter’s choice of gown in Say Yes To The Dress Lancashire.

In tonight’s episode of the TLC show, excited bride-to-be Heather wants to find a wedding dress to rival Meghan Markle’s: something simple, plain and elegant.

Raring to go, Heather, along with her sister Jess and bridesmaid Leanne, select a lace, figure-hugging and low-back gown.

But her mother, Sue, who has a big say in the decision having agreed to pay half of the cost, is less than impressed by Jess and Leanne’s choice for her daughter.

‘It’s too old fashioned for you. I love the little bit of sparkle, not too over the top, beautiful train. It’s just that back section is not doing it for me. No,’ she says firmly, before exclaiming: ‘I can see back fat!’ to gasps from sister Jess. 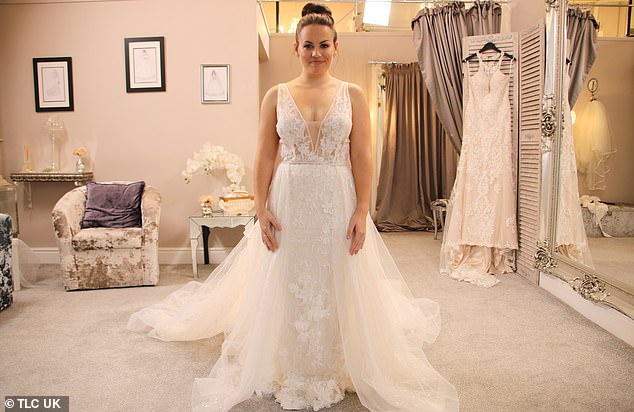 In tonight’s episode of Say Yes To The Dress Lancashire, excited bride-to-be Heather (pictured) hopes to find a gown to rival Meghan Markle’s: something simple, plain and elegant. Above in dress three – an Enzonai gown 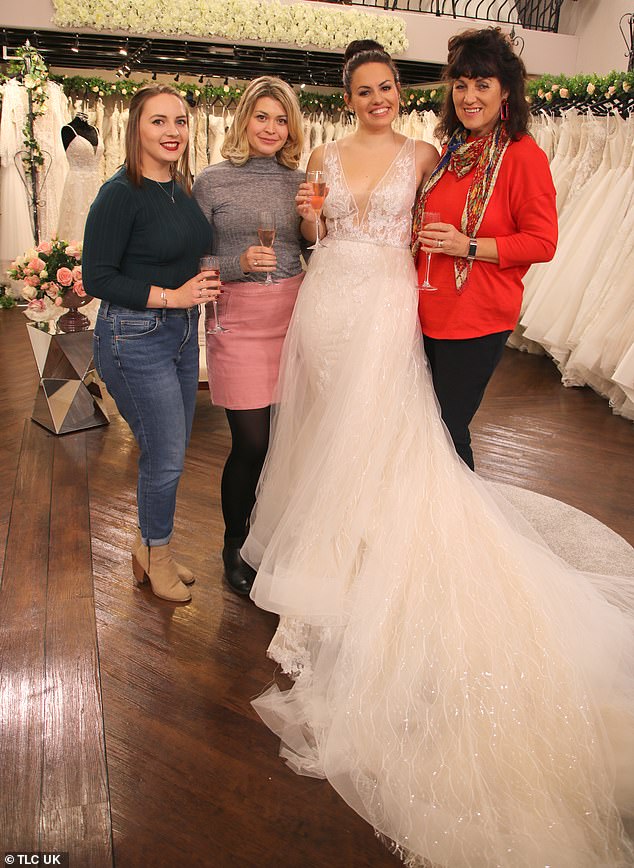 Heather’s fiancée Ned, who she has been with for over six years after meeting online, has got his heart set on seeing his bride-to-be in a Meghan Markle style dress.

But it’s not only her hubby-to-be that Heather needs to keep happy – as Heather is eager for her mum to approve, too.

‘My mum has very kindly agreed to go halves with me on the dress,’ she explains. ‘She has a big say in what my dress is really. I wouldn’t want to get a dress I don’t think she’d like or be happy to pay towards.’ 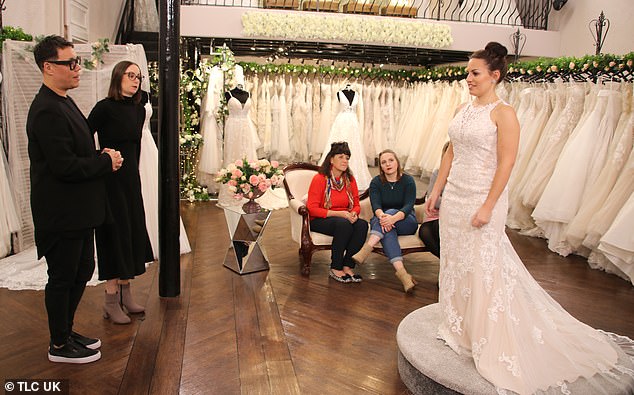 Speaking of the first dress, Heather’s mother Sue doesn’t hold back. ‘It’s just that back section is not doing it for me. No,’ she says firmly, before exclaiming ‘I can see back fat!’ 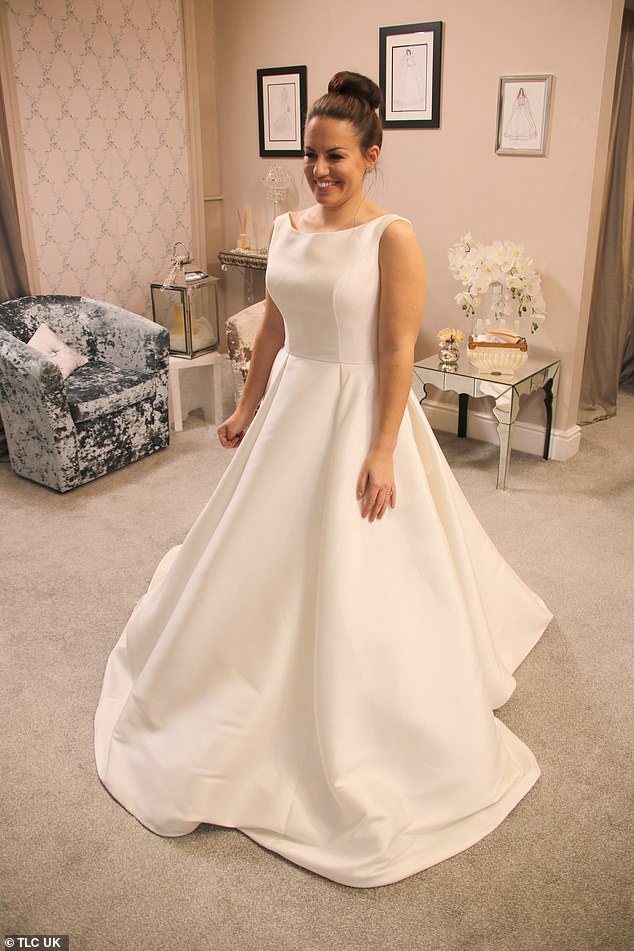 The bride-to-be (above) reveals her fiancée Ned has visions of her wearing a wedding gown similar to the one Meghan Markle wore when she wed Prince Harry. Pictured in dress number two

And Sue is quite vocal on the matter. ‘Just because Heather looks a bit like Meghan, doesn’t mean she should wear her dress,’ she jokes. ‘It doesn’t matter what Ned thinks, it’s just not going to happen – not if I’m paying for it.’

An excited Heather and her bridesmaid Leanne choose the first dress, which costs £1,399 by designer Stella York.

‘I’m not overawed by it,’ admits the bride-to-be. ‘I like the pattern and how much lace there is. I feel like it makes me look a bit old. It just doesn’t feel right for me.’

And after Sue makes her feelings known about the gown and her daughter’s ‘back fat’, bridesmaid Leanne agrees with the comments: ‘The shape’s beautiful, I just really hate the back’ she admits. 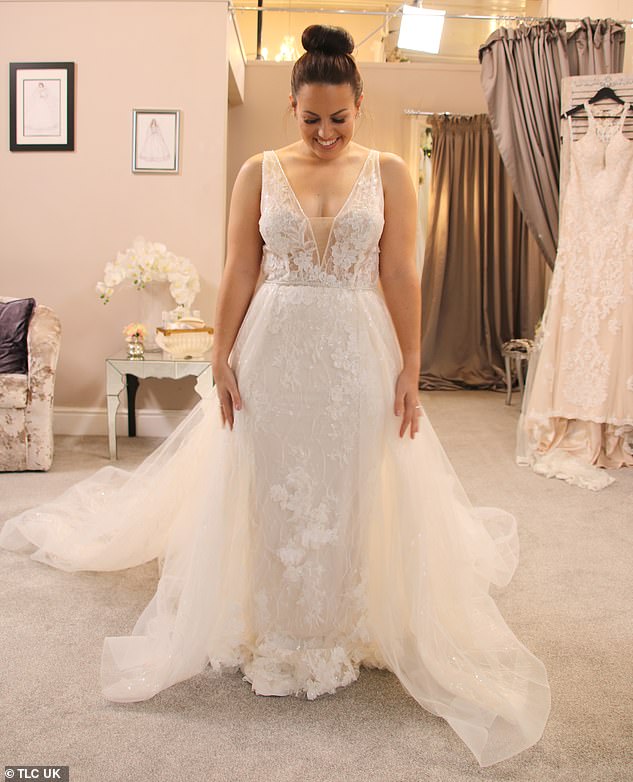 Super-stylist Gok finds Heather the dress of her dreams – a beautiful floral gown with an amazing, dazzling train and plunging neckline (pictured)

‘Well, brutal and honest, but actually we want that,’ Gok laughs after the entourage make their comments.

In the years they’ve been together, Heather reveals her and Ned have been to many weddings which has made them realise what they would and wouldn’t do at theirs  – before admitting he’s a bit of a ‘bridezilla.’

‘He’s very keen to have a say on things – and I embrace that,’ says Heather, before deciding to try on something she thinks he would like to see her in.

But on this occasion, a previously indecisive Heather is adamant the look isn’t for her. 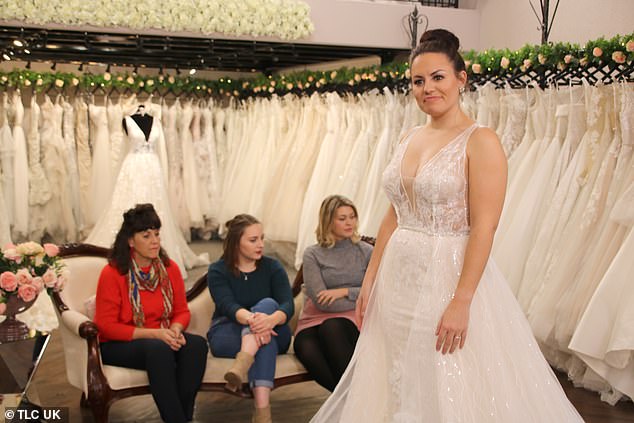 Speaking of her chosen dress, a delighted Heather explains: ‘I love the flowers and the detail. I love the top section. I love the V. I love the volume, the drama, the excitement. It’s just absolutely beautiful’ 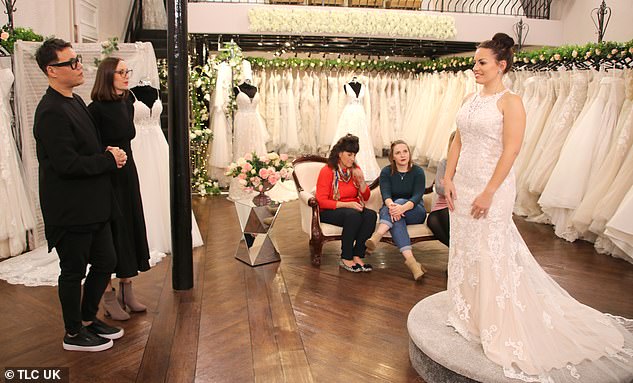 The bride-to-be’s entourage are all in agreement over her final decision. Heather admits: ‘I don’t think I’ve ever felt so special. Wow, this dress!’

‘I hate it,’ she says, as she tries on the Meghan Markle inspired gown. ‘This dress is not doing it for me at all. It’s so plain and boring. I don’t want to go and show this dress to my entourage.’

Lessons learned, super-stylist Gok takes the reins and finds Heather the dress of her dreams – a beautiful floral gown with an amazing, dazzling train and plunging neckline.

And Gok can’t contain himself when he puts Heather in the £2835 dress by designer Enzoani: ‘Look at my skin, I’ve literally got goosepimples!’ he admits.

When unveiling the dress to her entourage, the reception is much more positive, and Heather is overcome with emotion:

‘I love the flowers and the detail,’ she explains. ‘I love the top section. I love the V. I love the volume, the drama, the excitement. It’s just absolutely beautiful.’

‘I don’t think I’ve ever felt so special. Wow, this dress!’