Hurricane Laura toppled a Confederate statue that stood in front of a Lake Charles, Louisiana courthouse for more than 100 years. Erected in 1915, the South’s Defenders monument outlasted attempts to remove it two weeks ago, but it was knocked down by the powerful storm on Thursday.

One of the strongest hurricanes ever to strike the United States, Laura killed at least six people and destroyed property throughout Louisiana and Texas. The storm was a category 4 hurricane when it passed over Lake Charles, where the monument stood.

As recent Black Lives Matter protests have prompted a reckoning in the country, monuments dedicated to Confederates and controversial leaders have been taken down or forced governments to revisit their status. Calcasieu Parish officials voted 10-4 on August 13 to keep the statue on the grounds of a courthouse in Lake Charles. One official told the Associated Press that they asked for public comments and received 878 written responses against relocating the monument, and only 67 in favor of removing it.

CBS News reached out to the Calcasieu Parish for a response on what the plans for the statue will be, but did not immediately get a response. 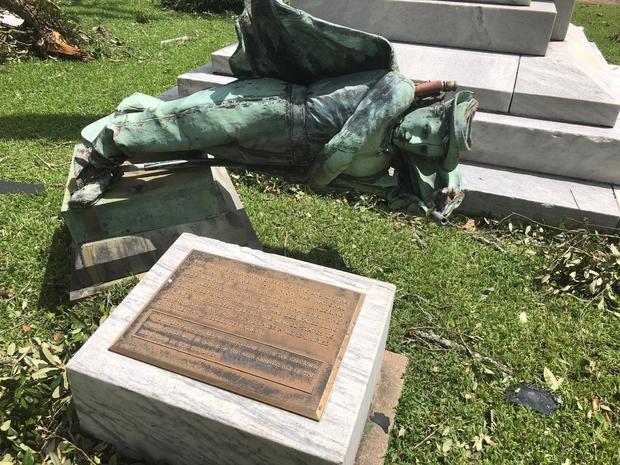 Critics consider the 105-year-old statue a racist monument and a reminder of slavery. Davante Lewis, who grew up in Lake Charles, supported the removal of the statue on Twitter and shared photos of the statue lying next to a pedestal.

“Lake Charles and Calcasieu Parish has been filled with controversy and tension after our parish government by a vote of 10-5 refused to take down the Confederate South’s Defenders Monument,” he tweeted Thursday. “Hurricane Laura had other plans and brought it down herself.”

Lake Charles and Calcasieu Parish has been filled with controversy and tension after our parish government by a vote of 10-5 refused to take down the Confederate South’s Defenders Monument.

Hurricane Laura had other plans and brought it down herself. pic.twitter.com/HmyCVlJF8k

But at least one resident thought that people celebrating the toppled monument were minimizing the devastation that the storm brought throughout the state. Andrew Beam, who also shared images of the monument, wrote that he realized “how unfazed and insensitive towards our catastrophe many people are.”

A part of me regrets making this tweet. It’s made me realize how unfazed and insensitive towards our catastrophe many people are. Over half of my mentions are people celebrating the destruction of an irrelevant statue. No added thoughts or prayers or even concern.

The hurricane’s top wind speed of 150 mph put it among the strongest systems on record in the U.S. A full assessment of the damage could take days.

Governor Bell Edwards called Laura the most powerful hurricane to strike Louisiana, meaning it surpassed even Katrina, which was a Category 3 storm when it hit in 2005.

Laura weakened to a tropical depression late Thursday, but forecasters said the possibility of more tornadoes and up to 5 inches of rain was headed for the Tennessee Valley region before the system closed in on Mid-Atlantic states by Saturday. 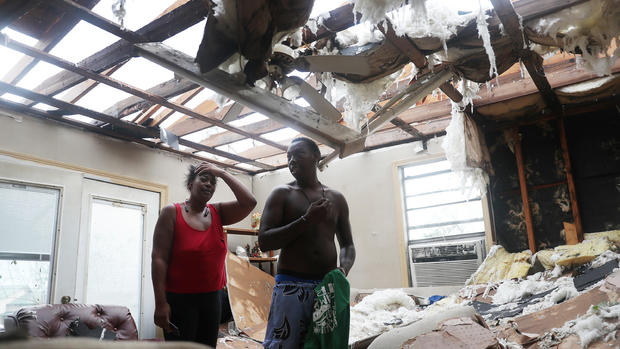 The Associated Press contributed this report.