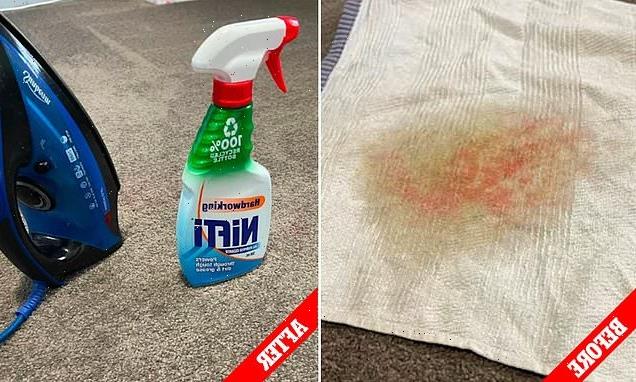 Mum shares how to remove tough carpet stains in seconds with an IRON: ‘It works like magic’

Claiming the hack ‘works like magic’, the busy mum-of-six used nothing but a towel, an iron and Nifti all-purpose cleaning spray to lift the stains – and the results impressed hundreds online.

Sharing before and after images to a popular Facebook group, she first sprayed the stain, laid the clean towel on top then ironed it for a few seconds.

‘I preach this every time someone asks. I love using a white towel, cause you can see it working its magic,’ the woman wrote.

‘I also leave Nifti to sit for five or so minutes before I iron.’ 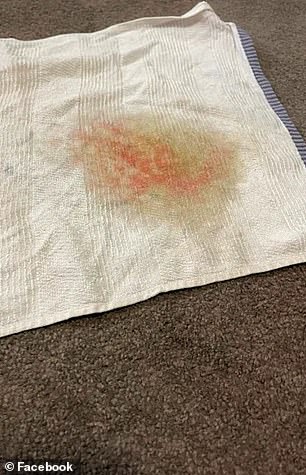 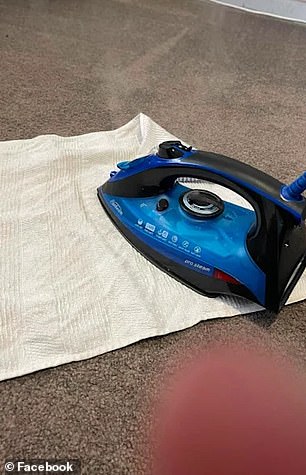 A mum-of-six has used an iron, towel and Nifti cleaning spray to lift unwanted carpet stains. Detailing a step-by-step guide online, the woman said she lets the Nifti spray soak into the stain for ‘five minutes or so’ before placing the towel on top (right)

Detailing a step-by-step guide online, the woman said she lets the Nifti spray soak into the stain for ‘five minutes or so’ before placing the towel on top.

She also ensures the iron is on a high heat setting and carefully places it over the towel.

‘I don’t leave it on too long, but I let it sizzle a little. I never leave it on long enough for carpet or anything to dry,’ she said.

‘It may take a few goes but definitely works!’

Place the clean towel over the top

Using the iron, place it over the stain for a few seconds

Remove the towel and repeat if needed

The busy mum was fed up with tough stains and first used Nifti to clean her home.

‘Being a mum of six kids, I had tried everything until I remembered that Nifti once got beetroot juice off my bench,’ she said.

‘Why can’t it work on floors? So I tried it and it worked.’

The result surprised hundreds online who deemed the hack as ‘amazing’ and ‘unbelievable’.

‘What is this sorcery?!’ one person wrote, another added: ‘NO WAY!!! Where can you purchase Nifti? Don’t recall seeing it’

The multi-purpose spray can be purchased for $5 at both Coles and Woolworths.

Others online said they have been using the product for years and swear by it when cleaning the house.

‘I swear by Nifti for everything cleaning-related, it’s definitely the best product to have on hand,’ one person wrote.

Another added: ‘I’ve been using Nifti for a very long time, way over 10 plus years and, in my opinion, it is the best on the market.’

‘Nifti is the only spray worth buying in my opinion,’ a third wrote.