When it comes to sipping a cold soda, I usually stick to the classics. Recently, though, Dr. Pepper introduced a brand new flavor of its iconic fizzy pop — and it has me intrigued. If you’ve heard about the new Dark Berry flavor recently released by the brand in conjunction with the new Spider-Man movie set to come out in July, you might find yourself wondering whether this new sip will hang around for good. So, how long will Dr. Pepper Dark Berry be available? If you’re interested in trying the fruity flavor, I’d suggest grabbing a case sooner than later.

According to a Dr. Pepper factsheet sent to Elite Daily, the limited-edition Dark Berry flavor was released to national retailers on Wednesday, May 1. Seeing as though it’s just a couple days since the release, I’d say you still have a pretty good shot at scoring a case or two for yourself. I wouldn’t wait too long to head to the store, though, because, according to the brand, the it will only be available for a limited time. I know that’s not exactly the hard end date people like to hear when they’re trying to plan for when to pick up a new product, but you can also keep in mind the drink was released in conjunction with Spider-Man: Far From Home. Since the new movie doesn’t even come out until July, there’s a good chance you can expect to see Dr. Pepper Dark Berry in stores until the July release date. 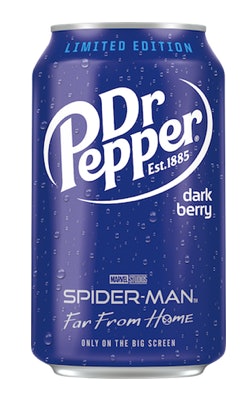 Now that you have a good idea of when you should head to the store to pick up your very own case of Dr. Pepper Dark Berry soda (read: ASAP), you might want to know a little bit more about the flavor. According to Dr. Pepper the "Dark Berry" flavor consists of blackberry, black currant, and black cherry fruit flavors. The drink is described as a sip with "classic Dr. Pepper" taste and "intriguing fruit flavors.

The Dr. Pepper Dark Berry release comes about two months ahead of the new Spider-Man film, and if you’re as excited about the new fruity pop as you are about the new action film, then you might want to double check the film’s release date in your calendar. Spider-Man: Far From Home was originally slated for a July 5 release, but as of late April, it was confirmed on the Sony website that the release date is now Tuesday, July 2. That’s exciting news for Spider-Man fans, but it might also mean the limited-edition Dr. Pepper flavor leaves shelves a little sooner, which is all the more reason to schedule a grocery run as soon as possible. Just don’t forget to add Dr. Pepper Dark Berry to your shopping list!