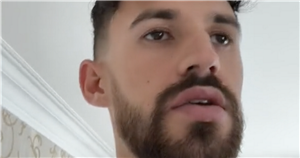 The Irish hunk, who was dumped from the show after Priya chose to couple up with Brett, took to TikTok to respond to a fan who'd enquired about the casting for the show.

The fan asked: "How long was the process for getting into the villa and what was your reaction finding out that you were going to be on Love Island?"

Matthew, donning a blue t-shirt and filming the clip from his home, explained: "It's long enough actually. I came back from California – I was living there at Christmas – then they reached out to me via Instagram.

"They organised a call. I had that then I had to submit a video, then do some questions. Then there was another stage after that where I had to answer more questions.

"Then I met the producers – I think there might have even been one more stage before that – then they fly me to London and I met the executive producers.

"Then they finally called me. They said they wanted me to go in as an early bombshell originally, but it switches about."

Matthew's answer comes after it was revealed he was actually interested in Mary Bedford while in the villa.

Speaking on the Love Island: The Morning After podcast to hosts Kem Cetinay and Arielle Free, Matthew was asked if there were any girls in the villa he wished he had got to know better.

Matthew revealed that he had been interested in Mary, even having a private chat with Dale about his feelings.

He said: "I did say to Dale before Island Vibes Club that I liked Mary kind of, and I was gonna talk to her. Yeah, that was a secret, there!

"But then I said to him, 'Listen, you are doing so well that I really don't want to get in the way of any of that. Dale's a really good friend of mine."

At the time of the conversation, Dale and Mary were getting to know each other more and Matthew didn’t want to step on his toes.

He said: "Dale obviously went at Island Vibes Club and I was actually going to start something with Mary.

“Honestly I really liked Priya so I was just focused on that but had Priya not been in it at that stage it would have been different I think."

Mary instead ended up pairing with footballer Aaron Simpson, with Matthew pursuing Priya until his departure from the villa.