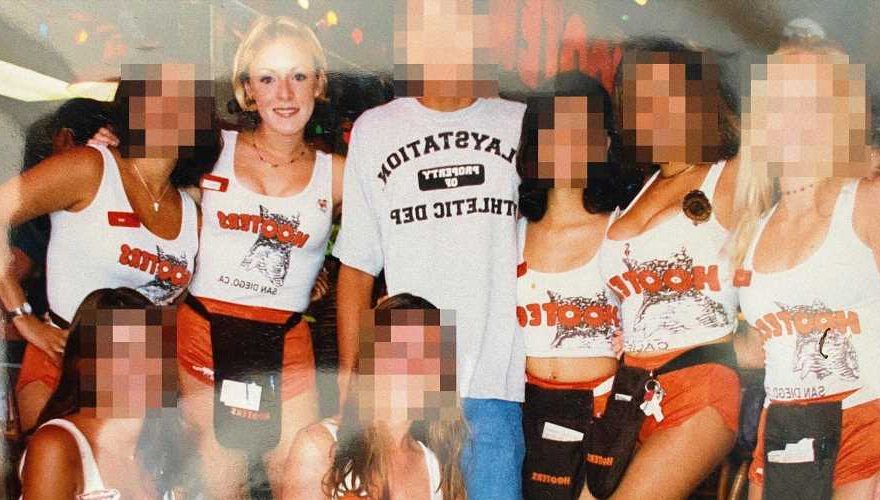 "It doesn't matter where you work. If you think something is wrong, you should be able to speak up about it," says a former Long Beach Hooters girl, as waitresses at the chain are known, who asked not to be named. She's just one of many former and current Hooters employees who share the sentiment that working at an establishment known for greasy chicken wings, tap beer, and attractive waitstaff does not revoke your license to discuss the notoriously skimpy and recently shrinking clothes that come with the job.

Earlier this fall, Hooters unveiled new uniforms, with thong-like shorts instead of the famous hot pants of yore, and numerous Hooters girls took to TikTok to protest the chain's cheeky new dress code. The internet did its thing, and the flossy booty shorts went viral, sparking outrage over the requirement — and the women who complained about it — seemingly in equal measure. While one side said, "Hooters employees have the right to express discomfort over the new thong uniforms," the other sang a different, more disparaging tune, with remarks like, "I bet these same women have no problem getting butt ass naked on their OnlyFans," or "Then don't work at Hooters." When Giselle Nguyen arrived for her shift at the Stafford, Texas Hooters location a few months ago, her manager brought out the new and reduced uniforms and told the girls they needed to change. Nguyen, a full-time student at Texas State University had only been working for the restaurant since the summer. "Men will openly stare at our behinds now," she tells InStyle. "I think it's made people like our customers more bold to say whatever they want because we're showing more."

Hooters is an establishment that celebrates the outdated, so naturally, in an America where misogyny, sexual harassment, and objectification aren't aging well, it's not surprising that the brand is grasping at straws and shortening their shorts, in a not-so-successful attempt to stay relevant.

Before the shorts fiasco, Hooters had been struggling. Restaurants had been steadily closing for the last decade. Business Insider reported that 7% of the locations went dark from 2012 to 2016, and that was before the #MeToo era took hold and before COVID-19 contributed to the closing of roughly 17% of US restaurants. Business Insider suggested the "breastaurant's" waning popularity was tied to millennials' deflating interest in boobs. Butts have been the 'it' body part of the last decade, as social media and plastic surgery trends can attest. But hyper-focusing on one body part rather than another might've been a misguided business move, and Hooters, a restaurant steeped nostalgia to "a different time," has simply failed to grow where it counts. When I was 18, I quit my job as a leasing consultant at a luxury apartment complex and moved out of my parents' house in the suburbs to a new city to get away from a toxic relationship. I needed money and needed it fast and when I walked down Hollywood Boulevard and saw those big, orange bubble letters, I felt a tinge of hope. I remember thinking, Now that's a place I bet I could get hired fast. And I did. Hooters hired me on the spot. I was able to rent a room in a townhouse in Los Angeles and support myself during a daunting transition in my young life. This is the case for many of the young women who find themselves at Hooters' front door. Full-time college students, young moms, hopeful ingenues — Hooters girls are cut from many different cloths and yet we don those orange spandex shorts for similar reasons: independence, ambition, and survival.

One of the girls became an ER doctor; another makes her own wine in Northern California; another is a real estate mogul. One girl was trying to get into the FBI. Women working there were freaking serious.

Most of the women who work or have worked for Hooters saw the job as the means to an end. "We all had goals," says Michelle Hamer, who worked at both San Diego and Long Beach Hooters locations in the late 1990s. "One of the girls became an ER Doctor, another makes her own wine in Northern California, another is a real estate mogul. I remember one girl who was trying to get into the FBI. Women working there were freaking serious," she says of the "goal-minded women" she slung wings alongside.

"They were like, 'This is the fastest way for me to make money as a woman, and do something else, like school, at the same time.'" In recent history, though, women have put up with less and less as society moves forward, and today it's fair to say that our options for work are more favorable — and putting up with cringey indignities to make extra cash is rapidly going out of style. But at the same time, the conversation around sexualized professions or OnlyFans-like side hustles has moved to a more empowered place: Many women enter these fields of their own volition. They want to do it. They like to do it. And the money's good enough. Gracie Herrick has worked at the Fredericksburg, Virginia location of Hooters for a year and a half. She's a full-time college student transferring to James Madison University and asserts that she loves her job, her coworkers and her managers. "We're just working and trying to make money to build our lives," said Herrick. "After COVID, I got laid off at the restaurant I was working at, and one of my friends worked at Hooters and she told me I should apply."

The girls at her location had been shown promotional photos of the new uniforms this fall and were excited for the new gear to arrive, but when they did, and the servers were asked to change, Herrick says many were taken aback by how revealing the shorts were. She recalls many of her colleagues being visibly uncomfortable, disappointed with the way the shorts fit, and that a few of them quit. "All of us complained," she says. "The manager said they were mandatory and they couldn't do anything about it." But when strangers on the internet groused that any Hooters girl who complained should just quit? She had to laugh — and TikTok.

The shorts were a small indignity — one plenty of staffers could take in stride or at least voice their concerns about. But they are part of a long tradition of Hooters taking a mile when young, eager women signed up for an inch.

During my tenure as a Hooters girl, in Hollywood around 2008 and Anaheim in 2010, I wore the original 1980s-style elastic waistband shorts that had been the uniform since day one, and then I wore the more recent Spandex style that preceded the thong shorts and look more like Volleyball shorts.

The chain promoted itself as a family restaurant, meanwhile I participated in a marshmallow-eating contest which entailed sitting on a barstool and cramming as many marshmallows into my mouth as possible while patrons cheered and took photos. I had to hula hoop while pouring beer and I danced on tables. I posed for pictures with customers and had my ass grabbed. I also was followed after leaving my shift. Yes, I'm aware I worked at a restaurant whose name is a euphemism for tits, breasts, boobies. No, I don't think working there should imply that I was in any way up for grabs.

Dee Woodhead worked at Hooters in Anaheim circa 2009. "I grew up in a very podunk, middle of nowhere town that I could not get out of soon enough. And my grandparents had a home that they were willing to rent to me in a suburb outside of LA. The only caveat was that I had to go get a job," says Woodhead, who now works as a senior digital marketing manager. She says she was on her third night of training before a customer crossed a line. "There was a group of six guys at one of the high tops, during a baseball game, we're pretty busy. I was doing the normal Hooters friendly thing, and the guy sitting on the end cupped my butt. I looked over at the manager who was standing on the floor, and he saw it happen. My manager did not say a single thing. I felt I had no right to go over there and say someone just slapped my butt."

I bartended my way through college. The only time I’ve ever been followed home was when I worked at Hooters — and it happened multiple times.

The harassment that happens within the restaurant's walls might even be considered tame relative to what happens in between shifts. "Customers followed me home," says Woodhead. "I bartended my way through college, so I worked in bars till very late hours all over Southern California for years, and the only time I've ever been followed home was when I worked at Hooters — and it happened multiple times. I would literally have to drive in circles around my house because somebody was following me."

It's no big surprise that not much has changed since the restaurant opened in 1983. Nguyen, who shares Herrick's sentiment that she loves her job, loves her coworkers and the opportunities that working at Hooters affords her, recalls a recent encounter that left her feeling unsafe. "Recently we had to ban one of our old regulars because he was so belligerently drunk and came drunk to Hooters and proceeded to get more drunk," says Nguyen. After he was banned, she ran into him at an IHOP when she was out to eat with her siblings. "He kept coming inside, saying that one of my managers is the reason he's banned, he wants to kill her and knows which shifts I worked." After that, according to Nguyen, the Stafford location brought in a police presence for the first time since she had worked for the chain.

Since the new booty shorts went viral and Hooters faced backlash for insisting the girls wear the new uniform, the restaurant backtracked and announced the shorts would be optional. Nguyen says she learned of the updated decision at a staff meeting. "My managers told us that Hooters changed the rules and we're allowed to wear old shorts if we would like to, but they know that those shorter shorts are going to make us more money," she recalls being told. "They said, 'Just know that when Hooters changed [the uniform], they had you in mind. You're gonna make more money this way.' And honestly, for me, tips-wise it's still the same."

If Hooters aims to stick around, it would do well to invest more effort in protecting and listening to its employees. After all, what would Hooters be without its girls? We all know no one really goes there for the food.