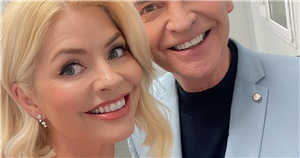 Holly Willoughby and Philip Schofield will be returning to our screens as the hosts of Dancing on Ice this Sunday night.

The pair looked incredible as they attended the show’s Hemel Hempstead rink on Wednesday afternoon for a preview.

Holly looked glam as always, modelling an incredible off-the-shoulder fitted floor-length gown as she posed for the cameras with co-host Phil.

The icy-blue silver dress features a stunning sweetheart neckline, a corset bodice with large sequin discs all over.

Up close pictures show hundreds of tiny clear coloured beads sewn into the dress too.

Her stylist Dannii Whiteman, shared a snap of Holly in the gorgeous dress before the shoot, sharing details of her outfit.

She captioned the post: “It’s that time again…time to take playing dress up, up a level.

“Holly Willoughby you look [cracking] in a Nedret Taciroglu sequin gown and jewellery from Boodles.”

The dress was made by Turkish designer Nedret for the fall/winter season.

He paired the look with a simple black Tee, black chinos and polished silver shiny shoes.

Fans were quick to comment on the pair, gushing: “Wow Holly you look absolutely beautiful. Phil doesn’t look so bad either!”

Another said the dress was ‘perfect’ for Dancing on Ice, adding: “You look like an Ice queen.”

A third added: “The best duo…I’m already obsessed with the 2023 looks.”

Holly revealed she actually loves dressing up for the show, admitting: “I don’t know why we’ve decided to go uber glam on this show but it just fits. It is lovely.”

The new series of the show will kick-start on Sunday night at 6.30pm.

There will be a total of 11 new celebrities will be taking to the ice to compete for the trophy and impress skating royalty Jayne Torvill and Christopher Dean with their new skills.

The same panel will be returning to judge the celebrities, with two-time Strictly winner Oti Mabuse sitting beside BGT-winning Diversity leader Ashley Banjo and Torvill and Dean. Olympic gold medal ice skaters Torvill and Dean have appeared on all 14 series of the show to date, acting as mentors to the celebrities before taking to the panel to score them on their moves.

Regan is a professional dancer and the son of football legend Paul Gascoigne.