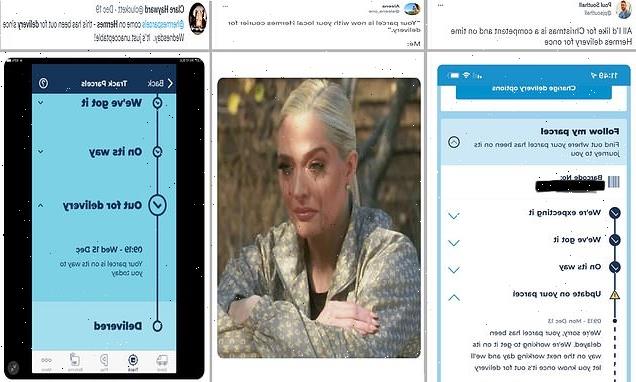 ‘All I want for Christmas is an on time Hermes delivery!’ Customers vent their frustration over missing parcels, delayed deliveries and a lack of information – after footage showed employees throwing packages

Frustrated Christmas shoppers have taken to Twitter to blast delivery firm Hermes for its ‘terrible’ service over the festive season, days after a video emerged showing couriers launching parcels around a depot.

UK customers have complained of delayed deliveries, missing parcels and packages left at the wrong address, with one saying: ‘All I want for Christmas is an on time Hermes delivery.’

Bemoaning the lack of transparency around the status of deliveries, one customer said the company’s tracking app should ‘win a prize for best fiction writing’.

Others slammed companies like ASOS, Mango and H&M for using the courier service, saying it almost guaranteed poor customer satisfaction and vowing to boycott their brands as a result.

Next, Marks & Spencer, John Lewis and Chilly’s water bottles also use the service. 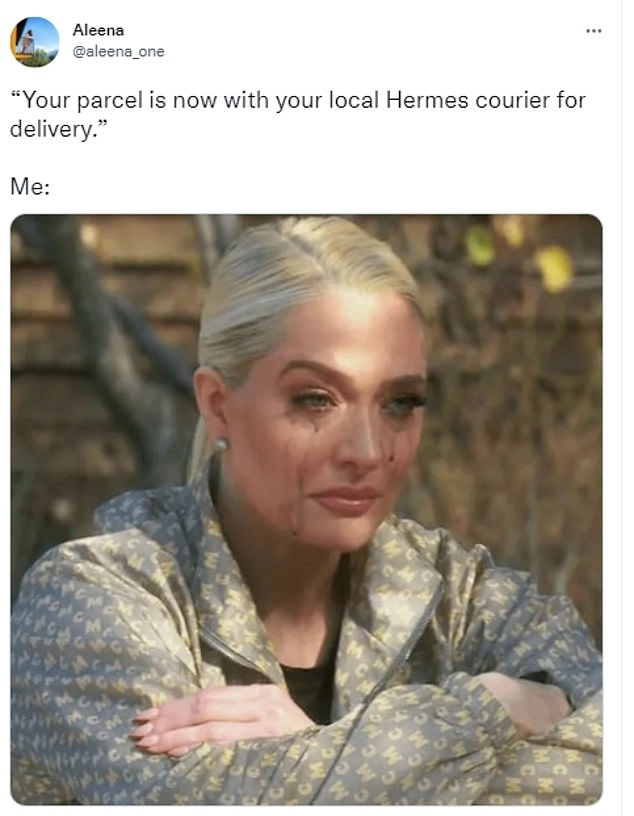 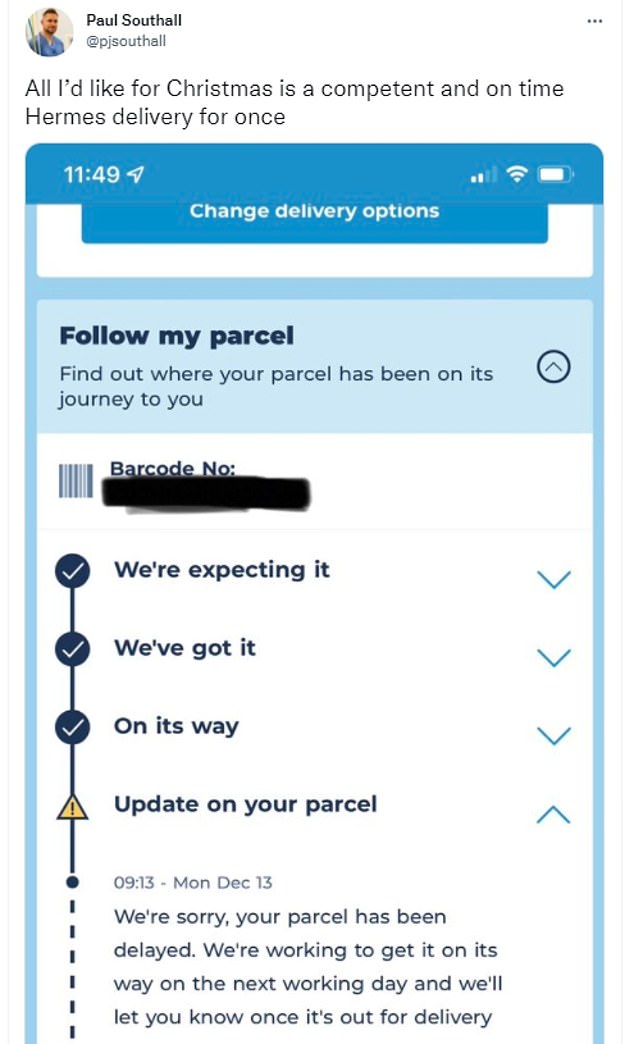 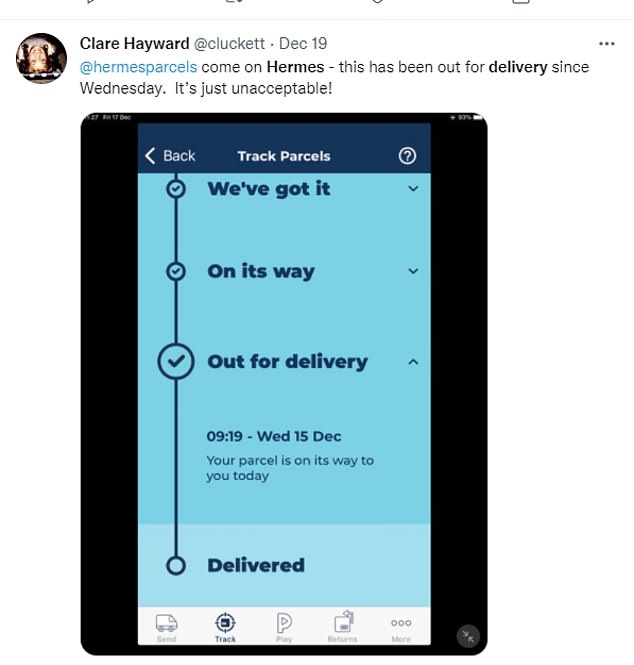 One tweeted: ‘It’s so annoying and the fact that company’s will charge you for delivery and use hermes is such a p**s take and form of bad customer service. I’m genuinely p****d off.’

Another posted: ‘Hermes currently lost a package, firm resent it express delivery, Hermes said it was out for delivery but now have decided it’s lost again. If you ever want to get rid of a dead body just give it to these knackers.’

A third added: ‘I’ve reached the point where I try to avoid buying online from companies who use Hermes as their courier. I’ve used their “next day delivery” half a dozen times now and the stuff has *never* actually arrived the next day.’

Another frustrated customer wrote: ‘Any company that uses Hermes as a delivery courier I will never buy from again! Hermes are the worse company ever! #hermes.’ 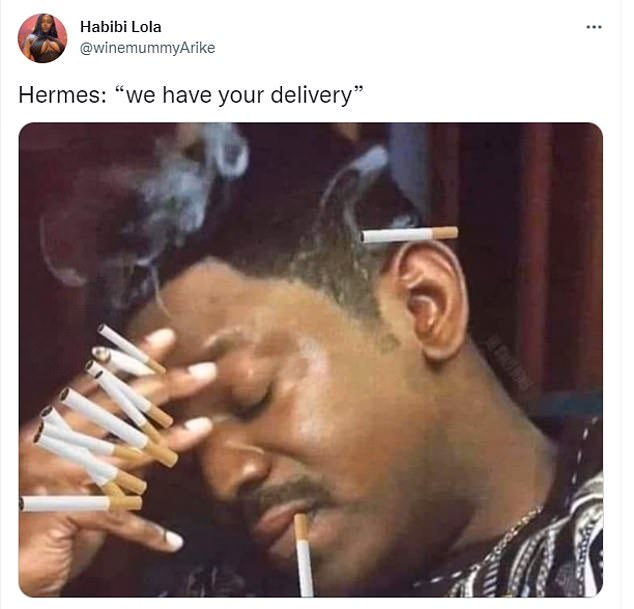 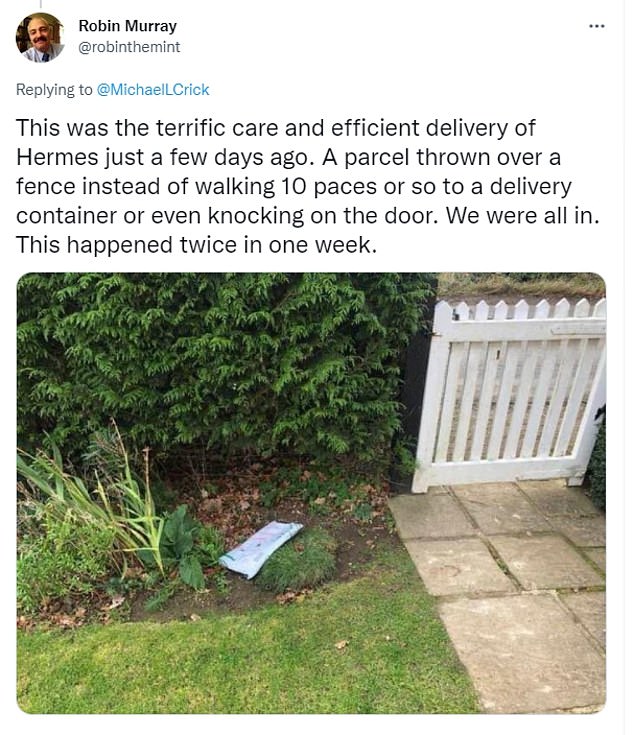 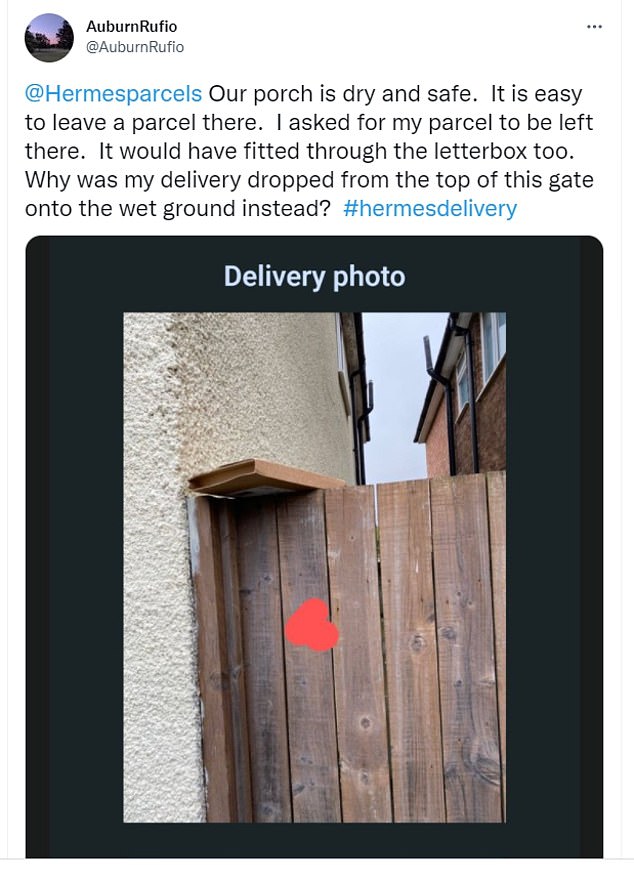 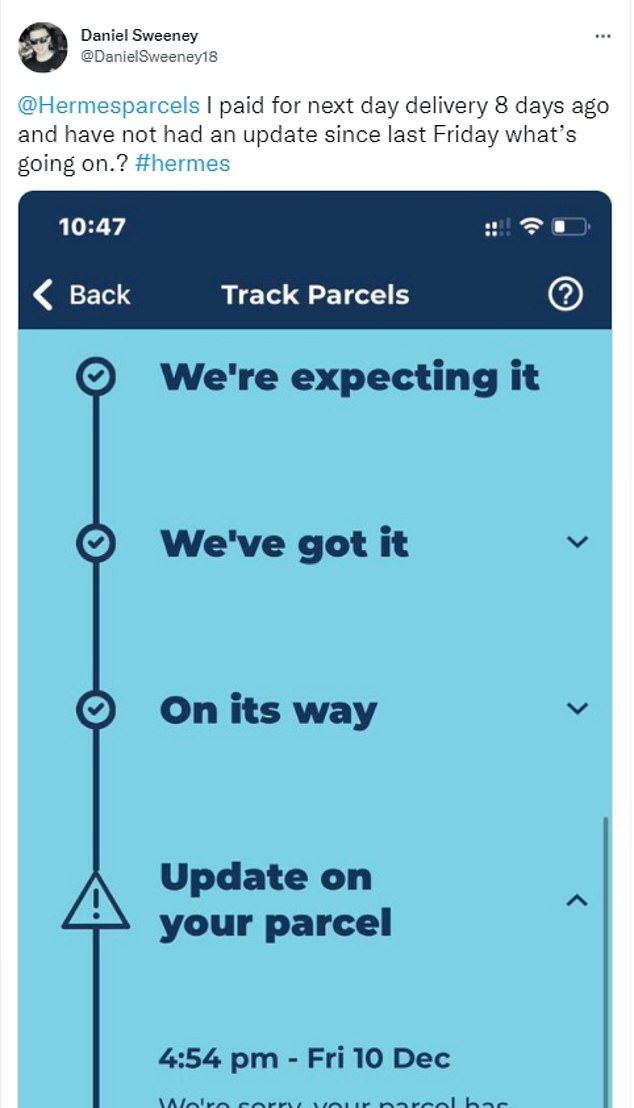 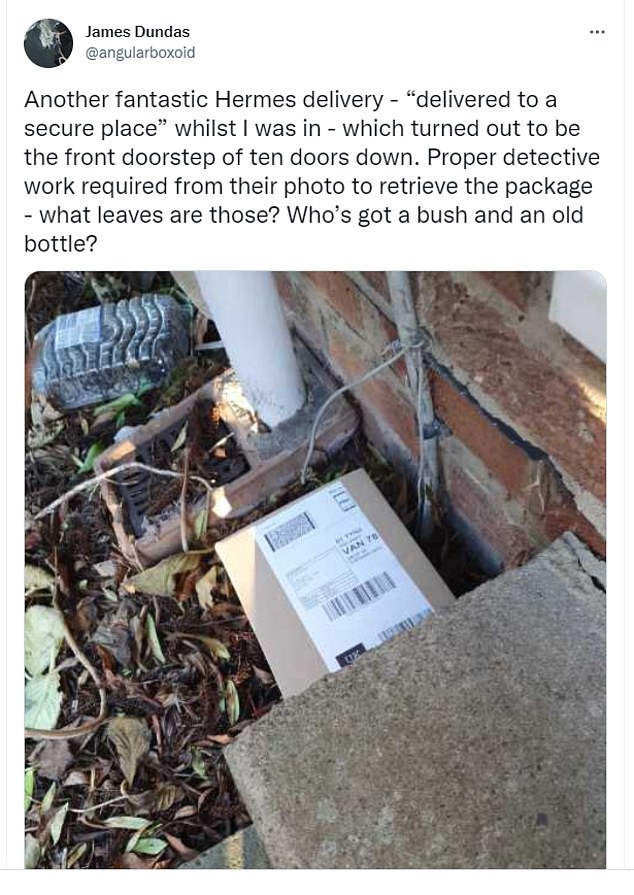 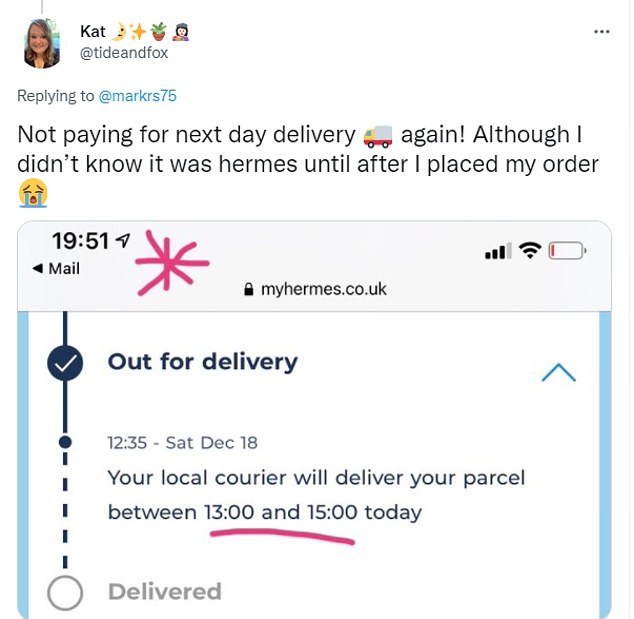 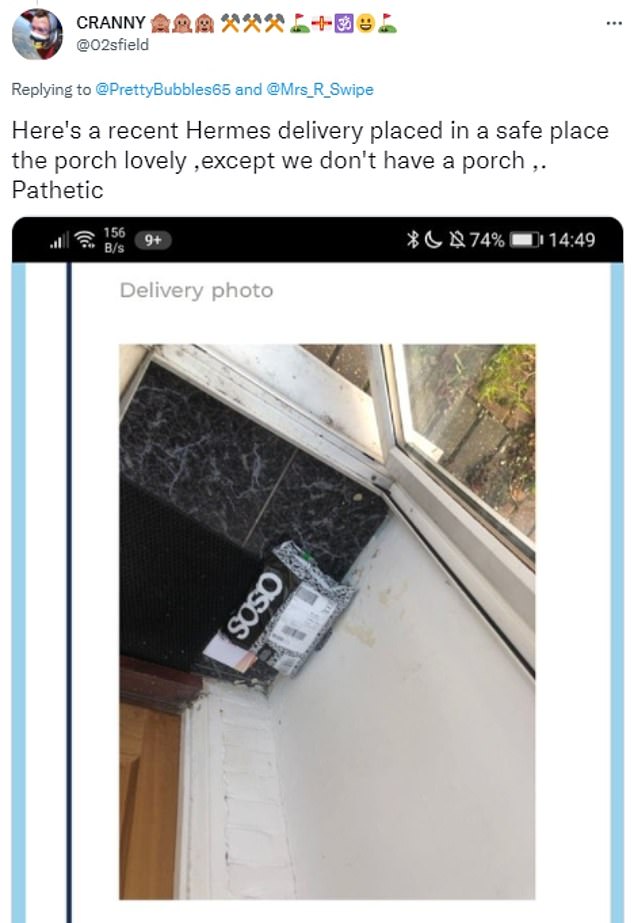 Dozens of customers have complained of delayed deliveries, missing parcels and packages left at the wrong address, with one saying: ‘All I want for Christmas is an on time Hermes delivery’

It comes days after footage emerged showing Hermes couriers launching parcels around a depot in a bid to save time and a manager telling an undercover reporter posing as a member of staff to ‘act stupid’ if customers complain.

Christmas deliveries are becoming a lottery, with four in ten buyers reporting items going missing or being damaged.

Pandemic shoppers have switched to spending billions online and crossing their fingers that items turn up before the big day.

A survey by consumer champion Which? found that 43 per cent of online shoppers experienced at least one problem last Christmas.

One in five (19 per cent) of this group said the item was late, 11 per cent of deliveries were left outside without consent, and 7 per cent went missing.

Parcels arrived broken after being thrown over fences – including a crate of wine hurled over a gate – some were left in the snow and rain, and others were put in the bin as a ‘safe space’, only to be taken away by binmen.

Which? said: ‘Don’t be afraid to make a complaint if you are having problems.’

A separate survey rated courier firms on overall satisfaction, communication, condition of the item and the ease of rearranging deliveries.

Yodel came at the bottom of the survey and fared the worst for delivering on time and communication. Almost one in ten (8 per cent) customers rated the company’s punctuality as poor and one in seven (14 per cent) said communication was poor.

Amazon Logistics and Royal Mail were top of the poll.

In the video, a Hermes employee is seen chucking deliveries against cages, walls and onto the floor in the video secretly filmed at the site in High Wycombe, Buckinghamshire, earlier this month by The Times.

At one point, the depot’s manager, Mark, confesses a surge in Christmas orders has led to next-day delivery deadlines not being met every single day, despite customers paying out for the service.

Giving advice on how to deal with customers’ complaints, the manager adds: ‘All you can do is act totally stupid, say: “I really apologise.”‘

Shopping giants that deliver items through the company – namely Next, Marks & Spencer, John Lewis and H&M – have expressed their ‘alarm’ at the footage and urged the firm to ‘urgently’ investigate.

The newspaper’s investigation further found that couriers joke about throwing deliveries over fences, refer to customers as ‘c***s’ and leave parcels in the rain.

It was also claimed that hundreds of customers are having to launch legal action against Hermes over lost or damaged orders.

The reporter said he earned £8.08 per hour on average – in addition to a £25 new-starter earning – while the national living wage is £8.91 for those aged 23 and above.

The company said it is conducting a full investigation and that senior teams at the delivery unit are undergoing an ‘urgent review’ – but added the site is performing well with no issues relating to service or damage.

It also strongly refuted the claims regarding minimum wage payment, saying the average courier is paid £14.88 per hour after expenses.

In a statement, Hermes said: ‘We do not claim to be perfect and are aware that in an operation of our size there will be individual issues that we need to improve.

‘We are determined to do this but remain confident that the vast majority of these allegations are unfounded and do not reflect our business and the standards we deliver.’ 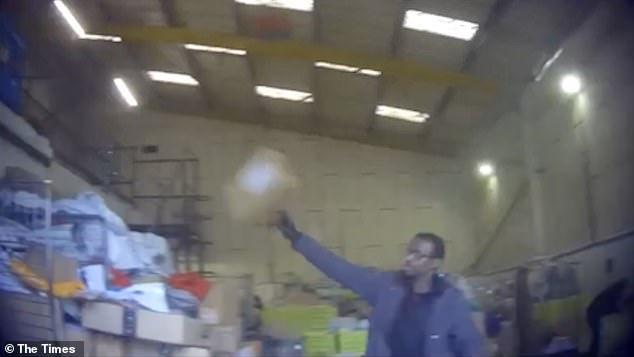 It comes days after footage emerged showing Hermes couriers launching parcels around a depot in a bid to save time and a manager telling an undercover reporter posing as a member of staff to ‘act stupid’ if customers complain. Above, at a High Wycombe depot

The company added: ‘We have however acted swiftly and launched a full investigation. Our senior teams are currently at the Delivery Unit mentioned undertaking an urgent review.

‘This unit is performing well and there are no issues regarding service or damage.

‘Finally, we strongly refute his claims regarding payment of minimum wage. All courier rounds pay above National Living Wage and the average courier pay is £14.88 per hour after expenses.’

Responding to the investigation, John Lewis told the newspaper it was ‘alarmed’ and had asked Hermes to ‘investigate urgently’, while Next and H&M said they were discussing the footage and Marks & Spencer took the claims ‘very seriously’. 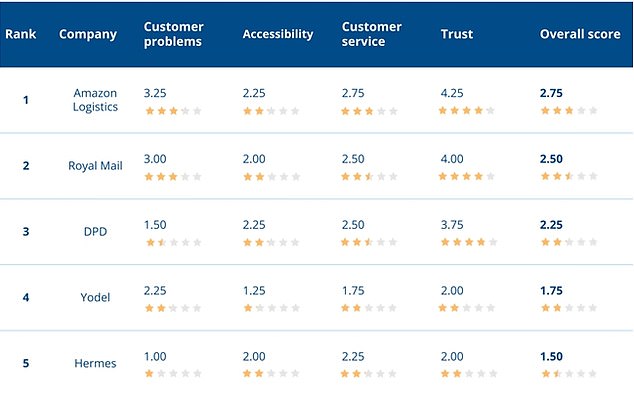 The Hermes fat cats: Dutch-born CEO who studied business at Warwick University went on to amass a net worth of £71.7million 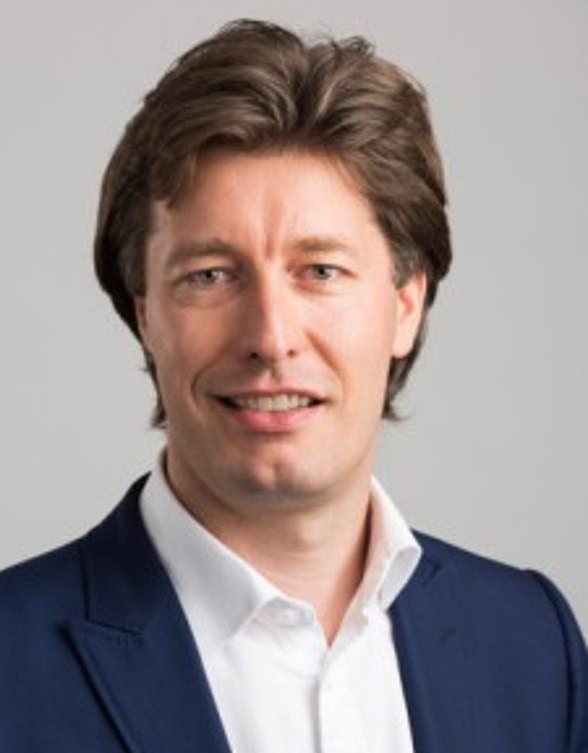 Born in Holland, Martijn de Lange came to the UK in 2006 to set up TNT Port North LTD, where he became Operations Director.

He moved to Hermes in 2013, where he continued working as as Operations Director before becoming CEO of Hermes UK in 2017 after promotions to COO and managing director.

According to Company Check, the combined cash at bank value for all businesses where Mr de Lange holds a current appointment equals a total current net worth of £71.7million. 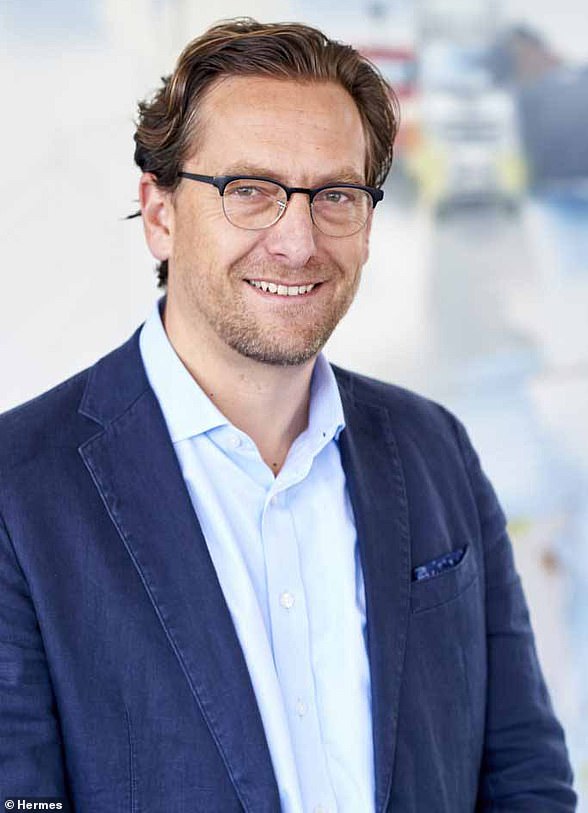 Stephan Schiller moved from his position as division manager for sales and key account management for group clients at the Otto Group to Hermes Transport Logistics GmbH in April 2010.

Previously, he was managing director within the DAL Deutsche Afrika Linien/John T. Essberger group of companies.

His joining HTL coincided with the launch of the sea and air division which he actively built up and developed.

In September 2010 he headed the operations sea and air division where he was responsible for all sea and air freight activities.

Since July 2014, Stephan Schiller has been a member of the Executive Board where he is responsible for supply chain solutions. 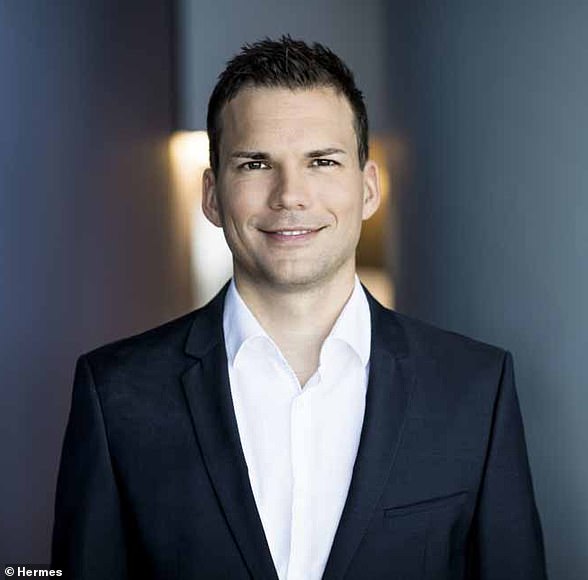 Kevin Kufs has been CEO of Hermes Fulfillment GmbH and Managing Director of Hermes Europe GmbH since April 1, 2021.

After a banking apprenticeship and a master’s degree, he made a career at an early stage in international retail and e-commerce companies.

Kevin Kufs worked for more than four years in the management of the e-commerce service provider Trade Global Asia Holding (formerly Netrada) in Hong Kong, most recently as Member of the Board and CEO for Asia Pacific.

In 2017 he joined the Otto Group. As Head of Operations, he took care of Hermes Fulfillment’s client business for two years.

As Group Vice President Supply Chain Management, Kevin Kufs has been responsible for the transformation of the Otto Group Holding division, the coordination of the Group’s logistics network and the implementation of various strategy projects since January 2019.

He returned to Hermes Fulfillment GmbH as COO on January 1, 2021, before being appointed CEO on April 1, 2021.