The government says it is taking steps to implement more recommendations from a report on sexual harassment in workplaces that it has been sitting on for almost a year, while Defence Minister Linda Reynolds has been discharged from hospital.

Senator Reynolds has been under pressure over the past two weeks over her handling of former staffer Brittany Higgins’ allegations she was raped by a colleague in the senator’s office in March 2019. 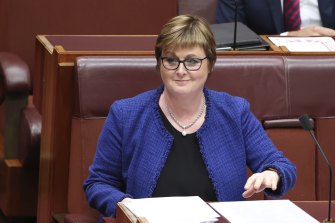 Defence Minister Linda Reynolds has been discharged from hospital after spending two nights under observation for a heart condition.Credit:Alex Ellinghausen

She admitted herself to a Canberra hospital on Wednesday morning on advice from her cardiologist over concerns relating to a pre-existing heart condition. She left on Friday morning, a spokeswoman said.

Ms Higgins has now made a formal police complaint about the assault and her decision to make her story public has prompted a trio of reviews into the workplace culture and complaint processes for staff and politicians at Parliament House.

“We don’t need to be reminded, but we have been reminded very, very acutely in the last two weeks of the importance of the work that has been done by the Sex Discrimination Commissioner,” she said on Friday. 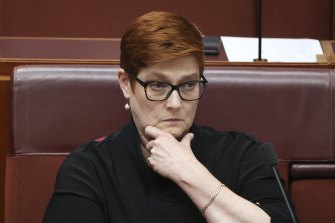 “An unsafe workplace is unsafe for everyone. Nobody should have to work in that environment.”

The government has been considering Sex Discrimination Commissioner Kate Jenkins’ [email protected] report on workplace sexual harassment, which makes 55 recommendations for tackling it, since March 2020.

It allocated $2.1 million in the October budget to address three of the recommendations, with the bulk of the funding to set up a [email protected] Council, led by Ms Jenkins, that will offer high-level advice to government and develop training resources for employers and their staff. The money will also go to a new online platform with sexual harassment resources, and a national survey in 2022 to gather data about the extent of the problem.

Senator Payne said Queensland senator Amanda Stoker, the new assistant minister to the attorney-general, now had carriage of the government’s response to the other recommendations that were within its power to implement.

Labor MP Sharon Claydon reported to the party’s national executive on Friday she had received “substantial feedback” from MPs and staff about “inadequate support, advice and assistance currently provided in the parliamentary environment, particularly the Department of Finance and related processes”.

Ms Claydon’s working group will give a further report in June with proposals for training for MPs, staff, volunteers and party officials and a roadmap for brining individual state branch rules into line with the new policies.

Labor’s federal executive adopted a new code of conduct and policies on bullying, harassment and sexual harassment along with a new complaint handling process for everyone within the party structure including officials, elected representatives, staffers and volunteers.